In today’s New York Times, we read that the CEO of Yahoo has been making $900,000 a week for running her company into the ground.

When a withered Yahoo is absorbed by Verizon Communications in the next week or so, it will be the end of an era for one of the pioneering names of the internet age.

It will also conclude the remarkable five-year run of Yahoo’s chief executive, Marissa Mayer, who was paid nearly a quarter of a billion dollars — a generous sum even by Silicon Valley’s lofty standards — while presiding over the company’s continued decline.

Ms. Mayer, now 42, was hailed as a savior when she left Google for Yahoo in 2012. But during her tenure, Yahoo was hit by two of the biggest privacy breaches in history. Advertisers, Yahoo’s bread and butter, fled the service. Users shifted ever more attention to Google, Facebook and other rivals. Yahoo’s staff shrank by almost 50 percent.

The company ended up so weakened that its board had little choice but to sell.

Mayer will made about $239 million on the sale.

Now, we might think that Yahoo stockholders must be really pissed off at Mayer. Apparently not, because she made them a lot of money.  As the once-significant Yahoo faded into obscurity,  for some reason stock prices kept going up. This was mostly because of other companies in which Yahoo invested. Mayer is brilliant at handling investments; she’s not good at running companies. And the Board of Directors allowed this situation to fester for five years.

Yahoo’s board recognized Ms. Mayer’s failure to meet business targets and docked her bonuses and stock awards in four of the five years she was in charge. But under terms of her original employment agreement, it also granted her new shares annually, easing the sting.

The biggest financial price she paid for her mistakes came this year, when she gave up her cash bonus for 2016 and equity awards for 2017 –about $14 million — as a penalty for management’s failure to act on evidence of the theft of data from 500 million accounts in 2014. That incident, along with the 2013 breach of one billion accounts, prompted Verizon to renegotiate its original purchase agreement with Yahoo, shaving $350 million from the $4.83 billion price.

There are people defending Mayer and saying that Yahoo wasn’t fixable. And that’s probably true; it was over the hill five years ago and more. I can’t even remember how long it’s been since I had anything to do with Yahoo. Still, I’m having a hard time wrapping my head around all that money. It’s like really big businesses like Yahoo, failures or not, operate outside of the normal laws of physics.

Meanwhile, WaPo covered the annual Walmart annual shareholder meeting. “They highlighted recent investments in training and technology and talked about the importance of cutting costs while increasing sales. Each 1-percent decrease in expenses amounts to a $1 billion savings for the company, Chief Financial Officer Brett Biggs (introduced by Shelton as ‘the pharaoh of finance’) told shareholders.”

Among their cost-cutting innovations? They want employees to deliver packages on their way home from work. I’m not making that up.

Earlier in the week, the company announced it is enlisting employees to deliver online orders on their way home from work. The effort, meant to cut costs by eliminating third-party delivery services, is being tested in three U.S. stores.

But some employees were less concerned about the future than the present. A handful of shareholders and Walmart workers presented proposals at the meeting, calling on the company to treat its workers better by offering higher wages, improved benefits and more predictable schedules.

“An unfair leave policy, reduced hours and low pay make it difficult for most of us to pay our bills and take care of our families,” said Carolyn Davis, who works at a Walmart store in Outer Banks, N.C., and was representing the activist group Organization United for Respect Walmart. “Walmart can, and should, live up to the promises it makes: letting us take care of our children when they are sick, and accepting our doctor’s notes.”

The meeting adjourned with no action taken on any of the above issues. 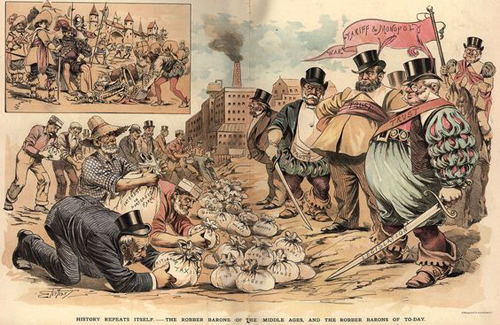 It wasn’t Donald Trump or alt-NeoNazi Steve Bannon who was mainly responsible for taking the US back out of the Paris climate accord.

It was the Koch Brothers and the rest of Big Oil, and Big Gas, and Big Coal.

It was “energy” corporations who have vast inventories of worthless fossil fuels that they want to unload on the marks quick before everybody realizes they have all the usefulness for human beings of eating arsenic.

There are some well run companies in the world that improve people’s lives. But if corporate America is willing to alternately cook and drown our grandchildren to make a quick buck today, then they are our enemies. They are monsters. Period.

Some oil and gas companies have been critical of Trump’s plan to withdraw from the Paris agreement. But the Koch boys do seem bent on destroying the planet.

Republican lawmakers were moved along by a campaign carefully crafted by fossil fuel industry players, most notably Charles D. and David H. Koch, the Kansas-based billionaires who run a chain of refineries (which can process 600,000 barrels of crude oil per day) as well as a subsidiary that owns or operates 4,000 miles of pipelines that move crude oil.

Government rules intended to slow climate change are “making people’s lives worse rather than better,” Charles Koch explained in a rare interview last year with Fortune, arguing that despite the costs, these efforts would make “very little difference in the future on what the temperature or the weather will be.”

And there is copious evidence showing that climate change denialism has been funded by money from the fossil fuel industries going back years. See “Dark Money Funds Climate Change Denialism,” for example.

Back to Juan Cole:

The compact we had with the corporations had already been reneged on long ago. They were supposed to make and distribute goods efficiently and provide an ever better standard of living to American workers.

But the real value of the average wage of a worker hasn’t increased since 1970.

The cost of a college education for a middle class family has skyrocketed, making it harder for families to get ahead. Graduates go out into the world with $150k debt.

Inequality is spiking. The opportunity for young people to rise beyond their social class has declined dramatically in US. America is no longer the land of opportunity.

So the compact between the public and the corporations was already in trouble. Workers still have not recovered from the 2008-9 crash.

The glib and deeply dishonest attempt of Big Carbon to represent the repudiation of the Paris accords as a victory for American workers will quickly be seen through. Factory jobs in the US have declined, but not because of environmental regulation. The big factor has been robotification. Coal jobs are not coming back.

The American public has shown itself incredibly patient as they watched a handful of corporations simply buy congressmen and senators and have them vote for the interests of the super-rich and against the interests of Americans.

Â One more time — if the leaders of the Democratic Party had a lick of sense, they’d realize that most of their “brand” problem comes from the fact that they’re about as compromised as the Republicans in this regard, and their fortunes are not likely to turn around until they stop trying to merely negotiate between the interests of Big Money and the interests of some of their voters. They need to stand up for working people, period.

The bottom line is that these news stories highlight the failure of capitalism to be sustainable unless you regulate the hell out of it. The question is, will capitalism be reined in before or after it destroys American democracy, not to mention the planet?

7 thoughts on “Capitalism Is Devouring Itself”