There are reports — I’m not sure they’ve been confirmed — that one person died in Charlottesville when a car plowed into counter-protesters. The video in this tweet is said to show some of what happened:

Video of car hitting anti-racist protestors. Let there be no confusion: this was deliberate terrorism. My prayers with victims. Stay home. pic.twitter.com/MUOZs71Pf4

More about the car incident:

Brennan Gilmore, a 38-year-old Charlottesville resident who came Saturday to oppose the white nationalists, was filming his friends demonstrating three blocks away from the park when he noticed a gray car drive past.

Mr. Gilmore turned his camera in time to see the car slow as it approached the counterprotesters and then suddenly speed up, ramming into the car in front of it and the crowd itself.

â€œBodies went flying â€” up onto the hood of the car and into the air,â€ Mr. Gilmore said. â€œIt was horrifying.â€

I haven’t been watching television, but I understand it’s all been very ugly — no surprise. And then there’s this — 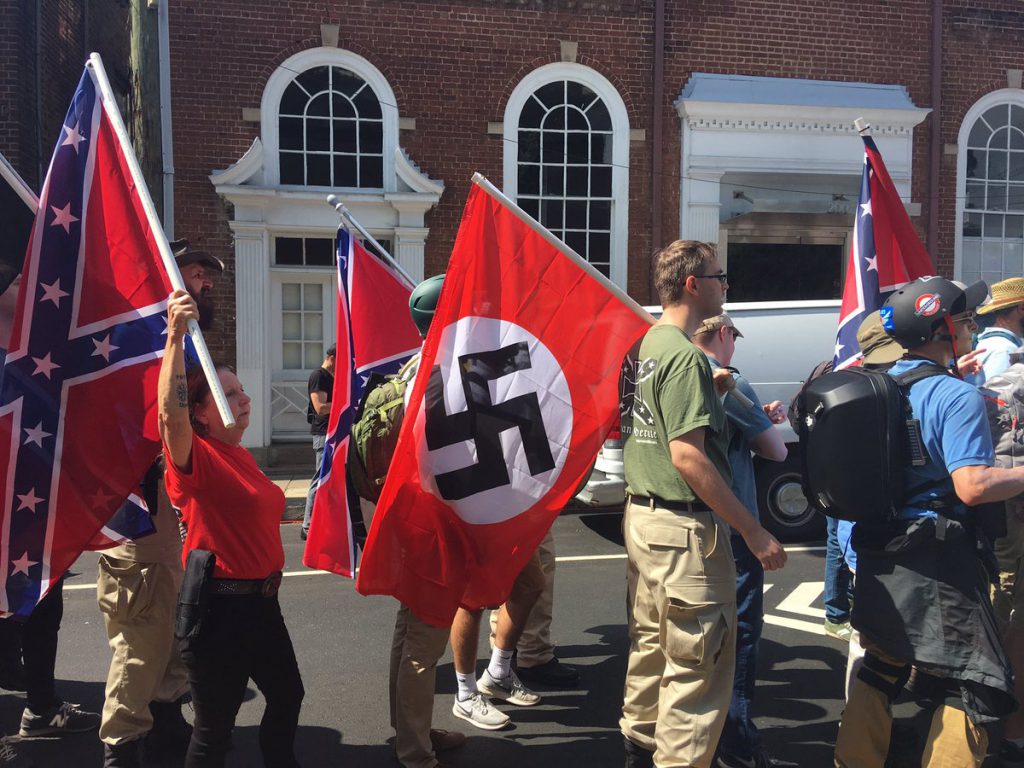 I understand the original purpose of the White Losers Rally was to protest the removal of a statue of Robert E. Lee. So I can understand the Confederate flags. But I’d really like to hear that one fellow explain what the Nazi flag represents to him. For that matter, what’s with the all the replicas of German army helmets I’ve seen in so many photos? I believe the German army still uses that same basic helmet shape today, so that’s not just a Nazi thing. Does replicating the military garb of a foreign country mean something to these people? And why no Viking helmets?

(Speaking of Nazis — I don’t know that I announced it here, but I have a contract with a real publisher to write something about Buddhist history, and that got me delving into its origins in India. The Indo-Europeans called “Aryans” the Nazis were so proud of were, um, not people you’d really want to move into your neighborhood. Â They were barbarians. They swept across Asia about 35 centuries ago burning, killing and looting everything. They smashed superior civilizations and made off with the livestock. It was centuries later before they had a written language or could build anything more complicated than a tool shed. They were actually way, way behind folks like the Chinese and Egyptians, civilization-wise. Well, come to think of it, maybe the losers are Aryans.)

Anyway– I’m sure we’ll get more details about what happened in Charlottesville in the next few days. Â I’ve heard from several people that the police didn’t do enough to intervene until the loser mob got out of hand. If the losers try to pull off more mass rallies, there had better be plenty of National Guard standing by to keep order.