I want to gripe about “I used to think gun control was the answer. My research told me otherwise” in WaPo.

I researched the strictly tightened gun laws in Britain and Australia and concluded that they didn’t prove much about what America’s policy should be. Neither nation experienced drops in mass shootings or other gun related-crime that could be attributed to their buybacks and bans. Mass shootings were too rare in Australia for their absence after the buyback program to be clear evidence of progress. And in both Australia and Britain, the gun restrictions had an ambiguous effect on other gun-related crimes or deaths.

If the author is arguing that the change in laws in Australia and Britain didn’t make much difference because gun death rates were already low, um, lots of other people say otherwise. This says that in Australia, gun-related homicides and suicides dropped by 59 and 60 percent respectively after they tightened the gun laws in 1996. This does not seem all that ambiguous.

When I looked at the other oft-praised policies, I found out that no gun owner walks into the store to buy an “assault weapon.” It’s an invented classification that includes any semi-automatic that has two or more features, such as a bayonet mount, a rocket-propelled grenade-launcher mount, a folding stock or a pistol grip. But guns are modular, and any hobbyist can easily add these features at home, just as if they were snapping together Legos.

The latter point is one I made in a post last year, Why an Assault Weapons Ban Is Not Going to Help. We aren’t getting anywhere complaining about “assault weapons,” because it’s a meaningless term. I wrote:

The federal assault weapons ban in effect from 1994 to 2004 had a negligible effect on gun violence overall; perpetrators simply switched to other kinds of semi-automatic weapons not considered “assault weapons.” The assault weapons ban was a cosmetic law that made people feel good about having done something about gun violence when in fact they hadn’t done much of anything. Let’s not go down that road again.

So forget “assault weapons.” I want us to start talking about a ban on all semiautomatic firearms (full auto firearms are already tightly restricted). That would actually mean something.

The Australian government “banned automatic and semiautomatic firearms, adopted new licensing requirements, established a national firearms registry, and instituted a 28-day waiting period for gun purchases. It also bought and destroyed more than 600,000 civilian-owned firearms, in a scheme that cost half a billion dollars and was funded by raising taxes.” (source) This entire overhaul was done in six months.

Would the same restrictions work as well in the U.S.? Probably not, because of our gun-nut culture, but it would work some.

Or, if restricting all semi-auto firearms is too much of a lift, consider allowing only those with fixed, low capacity magazines. The detachable magazines make it too easy for a shooter to keep shooting without a pause.

Federal law that went into effect in 1986 makes it illegal for a private civilian to own any fully automatic weapons manufactured after May 19, 1986.  And you cannot buy legal replacement parts for full-auto weapons manufactured before 1986.  All fully auto weapons are registered with the federal government. People who still own a “grandfather” full auto weapon cannot legally sell them to someone who doesn’t have a federal firearm license, and you have to do some major hoop-jumping to get those.  The process takes about a year, and if you don’t have a damn good reason to own a full-auto weapon, you won’t be licensed.

This ban on full auto firearms actually has had the effect of making full auto firearms scarce. No, it has not eliminated them entirely. But the ones still out there are almost never used in crimes in the U.S. The 1986 law did not violate the 2nd Amendment and appears to have been very effective in restricting access to fully automatic weapons.

Now, let’s do the same thing with semi-automatic weapons, including semi-automatic handguns. That would still leave a wide variety of weapons for those who want to hunt or protect their homes or hold up liquor stores or shoot their own heads off or whatever else they want to do with them, but it would cut down on the mass-shooter carnage considerably.

James Eagan Holmes, the Aurora movie theater shooter, had two weapons, a pump-action shotgun and a semi-automatic rifle. He fired six rounds from the shotgun, then went on to fire 65 rounds from the semi-auto rifle, a Smith & Wesson M&P15. That’s the difference.

I don’t think it’s just the availability of guns that makes the U.S. so dangerous. There’s something in our culture that’s seriously out of whack. But I don’t know how to fix that. 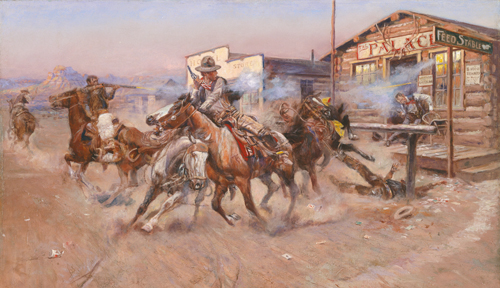 25 thoughts on “Know Your Gunz”