Before we go on to Syria — does anyone remember Trump’s big announcement last August that he was calling for a troop increase in Afghanistan?

President Trump outlined a revised vision for the U.S. war in Afghanistan on Monday, pledging to end a strategy of â€œnation-buildingâ€ and instead institute a policy aimed more squarely at addressing the terrorist threat that emanates from the region. …

… But Trump provided few specifics about his policy and how much the U.S. military commitment in the region would increase as a result, insisting that conditions on the ground would determine troop levels and strategy.

What sticks in my head most vividly is a conversation I overheard the next day, in which some locals were telling each other with some excitement that Trump was going to bring back the draft. They were anticipating a major military action in Afghanistan. And I’m thinking, seriously? This is nothing but the usual blah blah blah. In a couple of weeks nobody will remember anything about it. And I was right. There was a modest increase in troops, btw, that nobody seems to have noticed.

This morning I saw someone on social media declaring that we were back at war, and I’m thinking, probably not. It’s not clear to me that yesterday’s strike on Syria was any different from other strikes on Syria. This is just what we do in the absence of having a plan; we periodically fire missiles at Syria.

Krishnadev Calamur writes at the Atlantic:

It was a dramatic action at the end of a dramatic few days. But weâ€™ve seen a version of this before. What’s different about these strikes, Trump said: â€œWe are prepared to sustain this response until the Syrian regime stops its use of prohibited chemical agents.â€ And, as Dunford pointed out later, while the previous strike hit one facility, this one struck three. And while the last one was unilateral, this one involved the British and the French.

But, as was the case with the last strike, we wonâ€™t immediately know how effective Fridayâ€™s strikes were in stopping further chemical attacksâ€”or what will happen should Russia intervene militarily.

This year’s Syria air strike was bigger than last year’s Syria air strike, but I’m not seeing anyone who thinks it will make any long-term difference. The goal seems to have been to make a show of doing something without doing so much something that there would be any retaliation. Trump may have said that he is “prepared to sustain” whatever you want to call yesterday’s strikes, butÂ Secretary of Defense James Mattis said this was a “one-time shot.” It appears Trump’s administration pays less and less attention to Trump. It’s the only way it can function at all.

Just as a sign of how bleeped this all is, Trump actually tweeted “mission accomplished!” this morning. I’m not kidding.

A perfectly executed strike last night. Thank you to France and the United Kingdom for their wisdom and the power of their fine Military. Could not have had a better result. Mission Accomplished!

Lives lost, families blown apart. But we have cool missiles!

Most of the smart people are saying that the “result” is that Assad has won.Â Krishnadev Calamur concluded,

Any damage sustained to Syrian military facilities can be repaired by Assadâ€™s benefactors, Russia and Iran. Assad has all but won the conflict at a great cost:Â More than 500,000 people have been killed, the war has created more thanÂ 5 million refugees, and entireÂ cities have been flattened. Unless the U.S. supplements Fridayâ€™s actions with a broader military role in Syriaâ€”one that neither the president nor the American public has the appetite forâ€”Assad will not only remain in power, but also retain his ability to target his people.

In our age of politics as reality show, where we have hired the star of NBCâ€™s â€œApprenticeâ€ to play president (apparently in large part because he is both consistently awful and highly entertaining at once), even geopolitics is done for show.

The United States, France and the UK lost the Syrian War to Russia and Iran. It is all over but the shouting. They had hoped that the al-Assad regime, which had been a thorn in their sides for decades, would be overthrown. It isnâ€™t an ignoble hope. It is a horrible, Stalinist regime with massive amounts of blood on its hands. But the reasons for which Washington, Paris and London wanted it gone were not necessarily noble ones. Syria is among the last states to reject Israel. Its secular elites reached out, isolated after the end of the Cold War, to Iran for support. Its system does not accommodate the Western corporate take-over of the countryâ€™s economy. Overthrowing countries that buck the neoliberal, barracuda capitalist Washington consensus and challenge the neocolonial order in the Middle East (with the assumption of Israeli hegemony in the Levant) is a no-brainer for the North Atlantic powers. …

…Â The missile attacks are for domestic politics, and perhaps to some extent a demonstration of political will to Russia and Iran. As military history they are a footnote.

Those who argue that they were necessary to show resistance to the use of chemical weapons are missing some things. The West backed Saddam Husseinâ€™s use of chem in the Iraq-Iran War. It is hard to see why killing children with chlorine differs from the point of view of the children from killing them with bombs. Military action should be taken in accordance with international law. And, deploying missile strikes ineffectually renders them less effective politically down the road.

These strikes are like when a fistfight breaks out on the reality show Big Brother. The show will go on next week.

It’s worth reading Juan Cole all the way through; he explains what’s actually going on better than most of the big media outlets. And for all the chest-thumping going on in Washington, the more telling news is this:

Moscow met the limited American-led airstrikes against Syria before dawn on Saturday with plenty of bluster and heated rhetoric, starting with an uncharacteristically quick response from President Vladimir V. Putin condemning the attack and accusing the United States of aggravating the humanitarian situation.

But there was also a palpable sense of relief.

The sun was barely up before the Defense Ministry, not famous for speedy reactions, pumped out a statement underscoring that none of the thousands of Russian troops garrisoned in Syria had been threatened by the American, British and French attack and that none of its air defense systems had been mobilized.

This just in:Â Pro-Assad official says targeted bases were evacuated on Russian warning. Of course they were.

Right now my email in box is clogged with messages from various groups asking me to help stop Trump’s illegal strikes in Syria (by sending them money). I suspect the strikes are over already — for a while, anyway. Until next time somebody decides we have to Do Something about Assad. 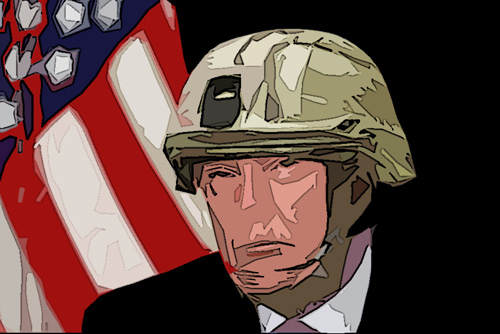 13 thoughts on “Syria: One and Done, and Nothing Really Changes”