Those interviewed included longtime Trump friend and confidant Thomas Barrack, who oversaw the fundraising effort, as well as individuals familiar with the massive inaugural fund, according to sources with direct knowledge. …

… The billionaire runs a fund with hundreds of millions in real estate and private equity holdings in the Middle East. Barrack oversaw the largest inaugural fundraising effort in U.S. history, bringing in $107 million — more than double what President Barack Obama raised for his first swearing-in festivities.

According to a source who has sat with the Mueller team for interviews in recent weeks, the special counsel is examining donors who have either business or personal connections in Russia, Saudi Arabia, the United Arab Emirates and Qatar. Several donors with those ties contributed large sums to the non-profit fundraising entity — gifts that topped out at $1 million dollars, according to public records.

According to the FED, it’s illegal for foreign nationals to contribute to a presidential inauguration committee. If any of that money can be traced to foreign sources, it’s a problem.

However, there’s another problem with Trump’s inauguration fund, because it’s widely suspected a huge amount of it wasn’t really spent on the inauguration.

How big is the discrepancy between what was taken in and what was spent? I found this at Annenberg FactCheck.org:

Inauguration costs are divided up into two categories. In one category is all the fun stuff: the inaugural balls, luncheons and Springsteen appearances. That’s also the category for things like the 20 JumboTrons placed around the National Mall and the special payment to keep the Smithsonian Institution open for the day. The fun events don’t cost taxpayers a dime. Presidential inauguration committees raise money from private donors for all the fun stuff. A spokesperson for Obama’s inaugural committee told ABC News that the committee raised about $45 million to cover the costs of events in the fun category. (A full accounting will eventually be filed with the FEC, probably in April.) Adjusting for inflation, Obama’s estimated total is about $41.4 million in 2005 dollars — or slightly less than the $42.3 million Bush raised for his second inauguration.

I found a more recent source that said Obama’s committee raised $53.2 million, although I’m not sure if that was for the first or second inauguration. There are other expenses related to the inauguration that taxpayers do pay for, and if you add it all together it can come up to $170 million or so. And of course you can find old articles in right-wing media complaining that Obama’s inauguration cost $170 million and Bush’s only $42.3 million, but they are confusing apples with apples, oranges and the rest of the farm. In fact, Bush’s and Obama’s inaugurations cost about the same, figuring for inflation. But right now, we’re only talking about the “fun stuff” paid for by the inauguration fund and not taxpayers.

And note that the Obamas had ten official inaugural balls after the 2009 ceremony; Trump had only three. And spent twice as much money?

I’m betting Trump’s committee spent no more than $50 million, if that. Money got shuffled around on paper to hide it somewhere. For example:

The company that received the biggest payment — $26 million — was WIS Media Partners of Marina del Rey, Calif. Records show that the firm was created in December 2016, about six weeks before the inauguration, and its founder, according to a person familiar with the firm, was Stephanie Winston Wolkoff, a longtime friend of Mrs. Trump’s. Otherwise there is very little information available about the company.

Another $25 million went to another even-production company in Maryland. There’s $51 million right there. The tax filings don’t tell us what these two event-production companies did with the money.

To add to the suspicion, at various times last year, the White House claimed all the money had been audited and the audit would be made publicly available by various dates that came and went. It seems to have taken someone a long time to cook the books properly.

In this week’s episode of “Trump, Inc.,” we dig into the inauguration. We’ve found that even experienced inaugural planners are baffled by the Trump committee’s massive fundraising and spending operation. We also noticed that two members of the inaugural committee have been convicted of financial crimes, and a third — the committee’s treasurer — was reportedly an unindicted co-conspirator in an accounting fraud.

Greg Jenkins led former President George W. Bush’s second inaugural committee in 2005, which raised and spent $42 million (that would be $53 million in today’s dollars). Asked about how Trump’s team managed to spend so much more, Jenkins said, “It’s inexplicable to me. I literally don’t know.”

“They had a third of the staff and a quarter of the events and they raise at least twice as much as we did,” Jenkins said. “So there’s the obvious question: Where did it go? I don’t know.”

Steve Kerrigan, who led both of former President Barack Obama’s inaugural committees, agreed. “There was no need for that amount of money,” said Kerrigan. “We literally did two inaugurations for less than the cost of that.”

According to Trump’s filing, slightly more than half of the money went to four event planning companies, including the firm owned by the first lady’s friend, Stephanie Winston Wolkoff. Her company, WIS Media Partners, paid the co-creator of “The Apprentice,” Mark Burnett, to help with the festivities, as The New York Times reported.

Melania Trump has since cut off her work with Wolkoff after the disclosure of the spending. Wolkoff and WIS Media Partners did not respond to a request for comment.

Ooo, Elliott Broidy has a lot to answer for.

Another inaugural organizer was Rick Gates, the former deputy to former Trump campaign manager Paul Manafort. Gates pleaded guiltyÂ this year to lying to the FBI and to conspiracy in a vast money laundering scheme, charges that came from Mueller’s office.

At the time that Gates worked on the inauguration, he had not been indicted, but his dealings with former Ukrainian strongman Viktor Yanukovych had already come under scrutiny. Gates’ business partner, Manafort, was forced off of the Trump campaign in the summer of 2016 after it was reported he got nearly $13 million of undisclosed payments from Yanukovych. Gates did not respond to requests for comment.

And then there’s this:

We found one more thing that set this inauguration apart: Some of the donations are almost impossible to trace. As the Center for Responsive Politics reports, two “dark money” groups, which do not disclose their donors, gave $1 million each. Trump’s inaugural committee appears to have been the first to accept significant donations from dark money groups.

So, I’m saying that at least $50 million raised by the inauguration committee was not spent on the inauguration and probably is sitting around in a slush fund somewhere, if it hasn’t already gone into a lot of pockets belonging to the Trump family and their various enablers-in-crime. 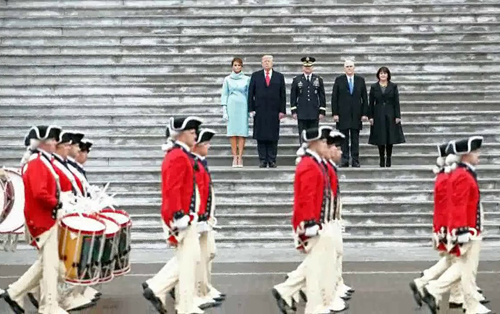 11 thoughts on “Another Trump Mystery: What Really Happened to the Inauguration Money?”