Just for starters, does anybody have a clue what The Creature is bleating about here?

Whoâ€™s going to give back the young and beautiful lives (and others) that have been devastated and destroyed by the phony Russia Collusion Witch Hunt? They journeyed down to Washington, D.C., with stars in their eyes and wanting to help our nation…They went back home in tatters!

Seriously, I have no clue what “young and beautiful” lives he’s talking about. Who went home in tatters?

And then there’s this one, from yesterday:

Put pressure on the Democrats to end the horrible law that separates children from there parents once they cross the Border into the U.S. Catch and Release, Lottery and Chain must also go with it and we MUST continue building the WALL! DEMOCRATS ARE PROTECTING MS-13 THUGS.

Put pressure on the Democrats?Â to end the horrible law?Â This is your bleeping policy, you bleeping moron.Â 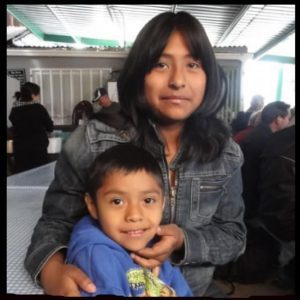 Mother and son at Mexican-American border.

In case anyone is confused, this is what’s happening: There has long been a policy that when unaccompanied minors enter the U.S., they are put into the custody of the Department of Homeland Security’sÂ Office of Refugee Resettlement, and from there they are either sent to relatives legally living in the U.S., if such can be found, or put into some kind of foster care. Once placed, Homeland Security takes no more responsibility for the children. It supplies no subsistence benefits for them and does not keep track of them. I would think they should at least keep track of them, but apparently they don’t. Again, my understanding is that’s been the process for awhile, and it could have used more scrutiny before Trump became president.

What’s newÂ and unique to the Trump Administration is that the Trump Administration (via Terminal Prick Jeff Sessions) has directed border patrolÂ to prosecute parents caught making unauthorized border crossings with their children. When that happens, and the parents are taken into custody, the children become unaccompanied minors. Got that? They weren’t really unaccompanied until Trump’s border patrol took their parents away. This directive wasn’t issued officially until recently, but the New York Times reported in April that 700 children, over 100 of them younger than four years old, had been taken from their parents at the border since October 2017.

And then, it was learned in a congressional hearing that Homeland Security has lost nearly 1500 children.

From October to December 2017, ORR [Office of Refugee Resettlement] attempted to reach 7,635 UAC [unaccompanied alien children] and their sponsors. Of this number, ORR reached and received agreement to participate in the safety and well-being call from approximately 86 percent of sponsors. From these calls, ORR learned that 6,075 UAC remained with their sponsors. Twenty-eight UAC had run away, five had been removed from the United States, and 52 had relocated to live with a non-sponsor. ORR was unable to determine with certainty the whereabouts of 1,475 UAC.

So we don’t know if those children are being trafficked or living on the streets or even still alive, and many of them actually came to the U.S. with at least one parent, who now has no idea where her or his children are. So, to keep out nasty street gangs — and I’m fine with keeping out nastyÂ  street gangs — we’re tearing up families that are not part of street gangs, many of whom are fleeing the violence of street gangs. And Trump is responsible for this, not the Democrats. The Democrats have absolutely no power to reverse Trump’s decision.

Trump may be attempting to use lost and traumatized children to blackmail Democrats into providing funds to build his stupid wall, but the ripping apart of those families is still on him. Hostage-takers who kill the hostages can’t blame their victims.

â€œWe have the worst immigration laws of any country, anywhere in the world,â€ Trump said at the roundtable held at the Morrelly Homeland Security Center. â€œThey exploited the loopholes in our laws to enter the country as unaccompanied alien minors.â€ 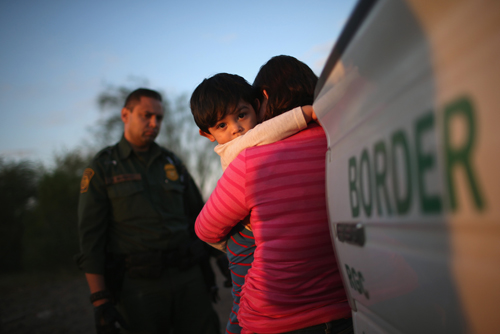 We’ll have to disagree about who is innocent and who is not.

But Trump was at his most brilliant yesterday when he tweeted that a White House aide who had given an official briefing to many members of the press did not exist.

The Failing @nytimes quotes â€œa senior White House official,â€ who doesnâ€™t exist, as saying â€œeven if the meeting were reinstated, holding it on June 12 would be impossible, given the lack of time and the amount of planning needed.â€ WRONG AGAIN! Use real people, not phony sources.

But most of the bleeping White House press corps was there and heard this White House official say what he said.Â  See articles from the Washington Post, New York magazine, and CNN, just for starters.

Apparently Trump hasn’t yet given up on his Nobel Prize and is clinging to a fiction that the June 12 meeting that he canceled is going to happen anyway. There is a word for people like Trump. It is “moron.” Actually there are several other words; I believe you can think of a few.