Last year, when Republicans shoved through their so-called “tax cuts and jobs” act, they were certain they had just bought a midterm win. But by this past summer they were abandoning tax cuts as a campaign ad talking point, mostly because it wasn’t working.  Voters weren’t falling for the scam.

So it was a big surprise to many people last week when Trump promised more tax cuts.

President Donald Trump has promised a new middle-income tax cut plan to land days before the midterm election, a move aimed at boosting his party’s chances of holding its Congressional majorities — yet Republican tax policy-makers know nothing about it.

Party leaders were caught off-guard by Trump’s comments, made Saturday after a rally in Nevada, that “we’re looking at a major tax cut for middle income people,” and that House Republicans, including Speaker Paul Ryan, are working on a possible bill.

In fact, the House did pass a “tax cuts 2.0” bill in September, but the Senate sat on it. That might have been what Trump was thinking of; things do tend to get scrambled around in his addled head. See also “Republicans were supposed to run on their tax cuts. Instead, theyâ€™re running away from them.” Seems kind of stupid to keep talking about them at all, actually, but what else can Republicans do?

First, polls over the past year or so have shown the law to be consistently popular — more so than, for instance, the tax cut Republicans thought would be the key to a midterm election victory. When even Fox News polls show the law getting more support than ever, the world is obviously not as Republicans would like it to be.

Second, instead of demanding that the ACA be torn from its foundations and set ablaze, the public seems more inclined to entrench its protections and expand its coverage. As the Associated Press reports, in the four conservative states where voters got initiatives on the ballot to accept the ACA’s expansion of Medicaid and insure thousands more people, the conservative lawmakers who refused to do so for years have been shocked by the popularity of the measures, with polls showing them with a good likelihood of winning.

Here in Missouri, incompetent weasel Josh Hawley, running against Claire McCaskill, has television ads running nonstop in which he declares that he does too support making insurance companies cover people with preexisting conditions, in spite of the fact that as Missouri Attorney General he joined a lawsuit seeking to overturn the ACA. And, of course, he has no coherent plan for replacing it. But he just luvs those preexisiting conditions requirements.

Then, of course, there’s the fact that the ACA’s guarantee of coverage for people with preexisting conditions has suddenly become the hottest issue in the midterm elections, so much so that one Republican candidate after another is airing ads proclaiming his fervent commitment to maintaining those protections — the very protections Republicans have been trying to destroy with repeal efforts and lawsuits aimed at getting the law struck down. You can find few better signs of the political success of a law than when the people who fought against it and are still trying to destroy it rush to assure voters that in fact they dearly love what it does.

And every time another Republican airs an ad claiming that he wants to mandate protections for preexisting conditions, he only reinforces one of the ideas that drove the creation of the ACA in the first place: that it’s the responsibility of government to ensure that every American has secure health coverage.

This leaves the Republicans with one signature issue that might work for them, which is scary dark foreign people. My sense of the polling is that Republican voters are scared out of their lily-white wits.

OMAHA — The guests at the Republican Business and Professional Women’s candidate forum were halfway through dessert when Representative Don Bacon offered to take their questions.

“There’s a thousand immigrants coming to our border again. From Honduras,” one woman called out. “And we’re unable to stop them without giving them asylum.”

Then a second woman asked about immigration. And a third. And a fourth. And a fifth.

Mr. Bacon, a centrist Republican seeking re-election in the only district in Nebraska that voted for Barack Obama in 2008 and sent a Democrat to Congress as recently as 2014, struggled to move the conversation along, alluding to “a breakdown in the rule of law” and his support for immigration measures that Democrats had blocked.

But soon the banquet room, filled with a few dozen people who appeared mostly white and in their 60s and 70s, broke into chants of “Build the wall! Build the wall!”

Yeah, all those migrants from Honduras are going straight to Omaha. And they’re going to break into your houses and get into your refrigerators and eat the fancy jello mold you made for the church supper and leave you with nothing.

Jeebus, people, get a grip. 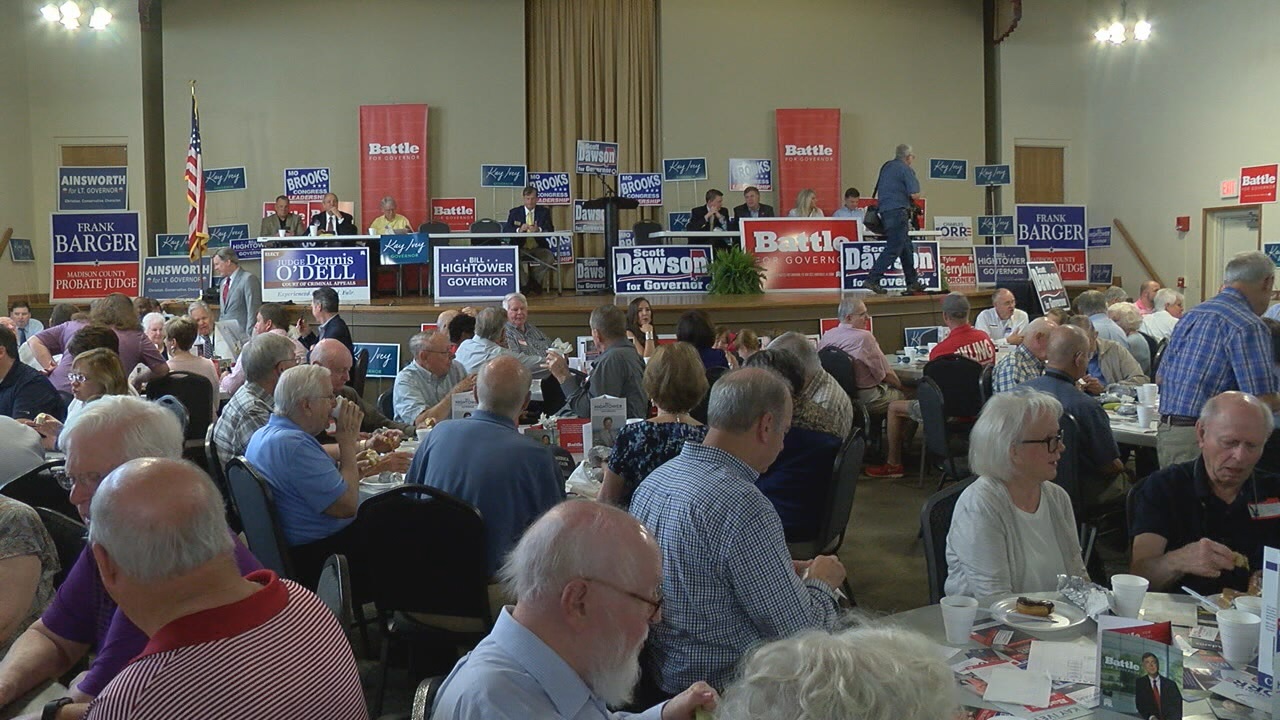 Actual photo I found on the internet of actual Republican voters in Alabama earlier this year.

The question is, how is this issue working for people who weren’t going to vote Republican, anyway? Polling tells us that independents and Democrats are not all that panicked about the scary dark foreign people. However, it might get the frightened addled old white folks out to vote.

I’m not going to let Dems off the hook. See Charles Blow:

One thing that I find profoundly disappointing about modern liberalism, particularly as it now stands in opposition to Trumpism, is the degree to which it is reactive, governed by what is being done to it rather than its own positive vision.

It is true that Donald Trump is not only antithetical to liberal values, he is antithetical to most American values, and as such limiting his power and limiting the duration of his tenure are of paramount concern and absolute urgency.

Therefore, resisting what Trump represents becomes a central point of moral rectitude and ultimate patriotism. Resistance is a reaction to Trump.

But that can’t be the sum total of one’s statement of principles. You must be driven toward a concept of what you want this country to become, and not just driven by a fear of what the country could descend into.

This has been my gripe about the Democratic Party for many years.  It’s why Dems can’t turn out the base. It’s why even those of us who see how much damage the Right is doing feel jaded and manipulated when told to “vote blue no matter who.” Ultimately, it’s why Hillary Clinton lost, although her lips will fall off before she’ll admit it. At least before 2020, get a vision, please.