I really don’t want to talk about politics. It all sucks. So instead let’s have fun laughing at the noobs who poured so much money into the Museum of the Bible in Washington, DC.

The Museum of the Bible announced Monday that at least five of its Dead Sea Scrolls — among the most valuable and historically significant items in its collection — are fakes. …

…The five scrolls represent a major proportion of the museum’s 16-piece collection of Dead Sea Scrolls, acquired as part of the 40,000-piece Green family collection over the past decade. Doubts about their authenticity were first raised two years ago by scholars in the academic journal Brill. Since then, scholar Kipp Davis of Trinity Western University has argued that at least seven of the scrolls were fake, based on the language used in the fragments and other textual evidence.

The announcement of the forgery comes after years of controversy and criticism over the museum’s approach to scholarship, which is heavily rooted in its evangelical Christian ethos. The 430,000-square-foot, $500 million museum, which opened in November 2017, is the brainchild of the Green family, the evangelical Christian owners and founders of the craft store chain Hobby Lobby. Last year, the museum sent five of the disputed fragments to a German laboratory for testing. The results, which were publicly released this week, cast serious doubt on the authenticity of all five. 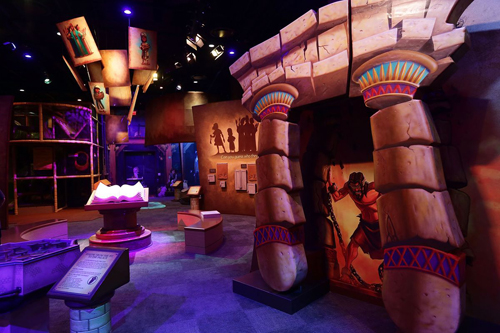 Inside the Museum of the Bible, which apparently is a 430,000-square-foot cheese fest.

The controversy over the Dead Sea Scrolls is about more than just the Green family’s academic rigor, or lack thereof. It’s also about the very particular way that many evangelical Christians see the Bible — a perspective that has made the evangelical market particularly susceptible to forgeries.

This fills me with a flood tide of entirely un-Christian glee. The Green family, the sex-obsessed theocrats behind Hobby Lobby, have done quite enough damage to the country to have earned being played for suckers like this. And, as is customary for all modern Christian evangelicals in politics, the Greens ignored the warnings of experts in Biblical archaeology who told them they likely were buying fakes. …

… Blessed are the theocrats, for they shall be called marks and rubes.

The Greens had broken laws importing the stuff they bought on the antiquities black market, so I can’t feel too sorry for them. I wonder if the thing is making them a return on their investment. Maybe it will be as big a money loser as Ark Encounter.

13 thoughts on “A Sham of Biblical Proportions”