It used to be that no one who wasn’t a politician focused on a presidential election until the year of the election. It used to be that many voters didn’t pay much attention to presidential elections until the party conventions. Of course, it also used to be that once an election was over, people grumbled for a few weeks if their candidate lost but then moved on. Now, it appears a lot of people aren’t done processing 2016, and at the same time people on the same side are already unfriending each in squabbles over who the Democratic nominee should be in 2020. In the last election we didn’t get nearly this crazy until the fall of 2015, not bleeping January.

I would like to propose some ground rules for political discussions to keep things sane. I don’t expect anyone to follow them, but what the heck. In no particular order:

Rule: The most important thing to demand right now is a fair, open and transparent nomination process. A lot of people are not going to get their first choice for the nomination, but if the process is seen as fair I believe most will acccept the result.

If, however, it appears there’s a thumb on a scale somewhere, or that the elites are manipulating the process to get their favored candidate, or if some candidates don’t get equal time in the debates or in media, the Democrats can forget about unity. See Chris Smith, “Democrats Don’t Like to Be Told Who to Vote For.”

Rule: Bringing up — factually — a politician’s voting record or positions on issues is not out of bounds and is not “attacking” that politician. We’ve already seen a blowup in media because David Sirota brought up Beto O’Rourke’s record of accepting donations from the fossil fuel sector. This was greeted up a bunch of headlines screaming that Bernie Sanders was trying to “kneecap” O’Rourke. One, Bernie Sanders had nothing to do with any of this; and two, since when is a politican’s actual record out of bounds? See Luke Darby, “No Democrat Deserves a Free Pass Just Because They’re Not Trump.”

Rule:  “Better than Trump” is too low a bar. Who we nominate matters, because even if the Democrat wins, a disappointing administration will just allow the Crazy Right to make a comeback. This puts together the two rules above. Stifling legitimate criticism of a potential — bleeping O’Rourke hasn’t even declared yet — candidate because he might be the nominee is a recipe for ultimate failure. As Luke Darby wrote (link above),

Even when the pragmatic, centrist choice defeats the hardline right-winger, that’s not necessarily a long term win. Look at Emmanuel Macron in France: his victory over the racist Marine Le Pen of the borderline fascist Front National party was seen as a huge stumble for a string of far right victories in Europe. But Macron’s policies have only exacerbated deep problems in France, and national protests have rocked the country since his administration decided, among other things, to cut taxes on the wealthy and raise them for everyone else by implementing a new gas tax. Macron is now so unpopular that many in France are calling for him to resign instead of finish his term.

If the Democratic establishment insists on trying to crown another favorite candidate, like it did Clinton in 2016, then no one should be surprised if we see a repeat of 2016 on Election Day. And as embarrassing as that will be for the Party, it’ll be much worse for the rest of us.

Martin Longman argues in “Winning Is Everything But Still Not Enough” (which is a response to a Paul Glastris feature, “Winning Is Not Enough”) that Democrats must put an end to the pattern of losing majorities as soon as they gain them; think the gains of 2006 and 2008 followed by the 2010 midterms. Think of eight years of Barack Obama in the White House (during which time the Democratic Party lost a net total of 13 governorships and 816 state legislative seats, and Democrats lost 12 and 64 seats in the U.S. Senate and House, respectively), followed by the election of Donald Trump and Republican majorities in the House and Senate. Winning is not enough.

If the Dems take back Congress and the White House in 2020, how do they build “robust and sustainable majorities like the ones they enjoyed in the 1930s and 1940s”? The answer, seems to me, is for the party to aggressively promote policies that will make people’s lives tangibly better. No more incrementalism or “pragmatism,” which is code for not doing shit. No more negotiating with ourselves to placate the Right. No more running on appeals to loyalty, or personality, or bromides and vague promises to “fight for you.” Candidates, tell us what you want to do, and if you are elected, bleeping do it or at least get bloodied and bruisedÂ trying.

With that in mind, right now we’re months away — probably more than a year away — from the time that most of the electorate will start to focus on the 2020 presidential election.  This is exactly the time for activists and politics nerds to bring up the records of people who are considered possibilities and discuss, rationally and factually, if this is someone we want to be president some day. Yes, they are all better than Trump, but so is a can of soup. The candidate’s record will come out some day; better now than later. Let’s not nominate a pig in a poke.

Rule: Please, never, ever go around demanding “vote blue no matter who.” And this time, let us get through the primaries and choose a nominee before calling for everybody to unite behind whatever candidate you think should be nominated.  Assume that nobody owns the nomination until he or she actually has it.

Rule: On the other hand, badmouthing potential candidates because of their personalities or age or campaign style or speaking voice or because you think they are boring needs to be out of bounds now. Those are your biases showing. You are not a bleeping representative sample. Expressing concerns, okay; insults and bashing, no. I hope we still understand the difference.

Rule: Let’s not debate electability. Liz Warren is already being slammed for not being electable. Yeah, people didn’t think Donald Trump was electable, either. And in 2016 Hillary Clinton ran ads in the primaries warning voters that if Bernie Sanders were nominated instead of her, Trump would be president, because she was electable and Sanders wasn’t. Notice how that worked out. We all coalesced around John Kerry in 2004 because we thought his war record would innoculate him from being called soft on terrorism, or whatever we were concerned about. We weren’t thinking in terms of who do I want to be president?

The fact is, the “electability” experts are more often wrong than right (see Matt Taibbi on this point). We are about to go through a messy and dynamic year. None of us knows what will happen. Nobody knows where voters’ heads will be this time next year, never mind in November 2020. It’s a huge mistake to try to choose a nominee based on how marketable we think he or she might be in the general rather than on who we want to be president, because electability is not something we can know.

And please, candidates, after 2016 I hope you will be smart enough to not run for the nomination on the argument that you can beat Trump but your opponents cannot. That’s not something we can know.

If we have a fair and open nomination process on a level playing field, the person who wins will be electable. The vanity candidates and lackluster campaigners will fall away. Let the primary process show us who is electable and who isn’t, not our biases.

Rule: Polls mean absolutely nothing now. Please stop posting polls on social media showing that your favorite candidate can win; these just cause frutless arguments. Please don’t make a bleeping big deal about poll numbers at least until the primaries have started.

Rule: Let go of 2016. This applies to Clinton and Sanders supporters alike.  Clinton will not be a candidate, and former Clinton supporters need to stop tearing the party apart with their incessant badmouthing of Sanders and his supporters. Sanders supporters need to stop expecting that 2020 will be a vindication of the hopes that were dashed in 2016. Sanders might not run, and if he does run he might not do as well as he did in 2016. Nobody knows what will happen. Don’t get too emotionally invested in only one outcome.

Rule: Try to avoid being manipulated. (Note that a lot of the opinion pieces in media about candidate “electability” are nothing but attempts at manipulating your opinion.) Democratic and media elites will be doing their best to jerk our chains to get behind a their candidate. Don’t fall for it. Make up your own mind. Think about what you want in a presidential candidate. You have a right to ask for what you want, especially if it’s not what the elites want to give you.

Okay, that’s my list. What’s yours? Add to the comments. 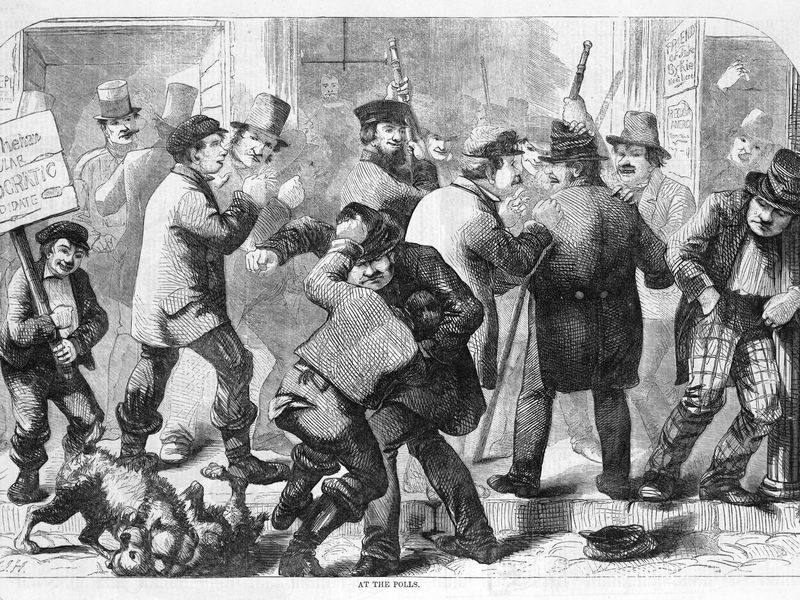 Harper’s Weekly, 1857, “At the Polls.” We see that politics were so much more genteel when white men ran everything.