The only poll I’ve seen about the phony national emergency, by NPR/PBS NewsHour/Marist, says that the public disapproves of Trump’s phony national emergency declaration by 61 to 39 percent. “Nearly 6-in-10 also don’t believe there is an emergency at the southern border and that the president is misusing his presidential authority. They also believe that his decision should be challenged in court,” NPR reports. Here is a more detailed demographic breakdown.

Republicans, naturally, are more approving of the declaration than the public at large. But Paul Waldman points out that this isn’t necessarily good news for Trump.

The question is whether he can duplicate his 2016 electoral college hat trick by dramatically energizing noncollege whites again, and by winning independents and others who decide they don’t like either candidate (as Trump did in 2016).

And among those groups, the poll finds surprising levels of opposition. Large majorities of independents tilt against Trump on these questions. And non-college-educated whites disapprove of the national emergency declaration by 53 to 43; they lean slightly against the idea that there’s even any emergency (49-47); and even marginally say that it makes them less likely to vote for Trump (46-41).

However, there is one demographic that’s still in the tank for Trump.

White evangelical Christians. They approve of the declaration by 67 to 26; think there is a national emergency on the border by 70 to 22; say he’s properly using his powers by 69-23; and say this makes them more likely to vote for him by 60 to 22..

I have to say that even I am a bit nonplussed by the white evangellical Christians, even though as a child of the Bible Belt I suppose they shouldn’t surprise me.

There was a very disturbing op ed in the New York Times a couple of months ago that relates to this — “Why Trump Reigns as King Cyrus” by Katherine Stewart. There’s a big chunk of white evangelicals — a not insubstantial part of the population — that sincerely wants Trump or somebody like him to seize power and establish a right-wing theocracy. That’s more important to them than those piddly theological concerns such as morality and Jesus.

Today’s Christian nationalists talk a good game about respecting the Constitution and America’s founders, but at bottom they sound as if they prefer autocrats to democrats. In fact, what they really want is a king. “It is God that raises up a king,” according to Paula White, a prosperity gospel preacher who has advised Mr. Trump.

Ralph Drollinger, who has led weekly Bible study groups in the White House attended by Vice President Mike Pence and many other cabinet members, likes the word “king” so much that he frequently turns it into a verb. “Get ready to king in our future lives,” he tells his followers. “Christian believers will — soon, I hope — become the consummate, perfect governing authorities!”

The great thing about kings like Cyrus, as far as today’s Christian nationalists are concerned, is that they don’t have to follow rules. They are the law. This makes them ideal leaders in paranoid times.

“When are they going to start rolling out the boxcars to start hauling off Christians?” Tony Perkins, the president of the Family Research Council, asked in 2016. If you’re hearing those boxcars pulling up in the distance, as it were, you don’t merely overlook the antisocial qualities of a prospective leader, you embrace them as virtues.

See also this discussion on white Christian evangelicals and Christian nationalism at Vox. White evangelicals have a long history of cherry-picking scripture to support whatever they want to believe, going back to their antebellum support for slavery in the South.

You never hear devout evangelicals say that God raised up Trump to punish or chastise evangelicals for placing too much of their hope in power politics or political strongmen. Evangelicals are modern people — they believe in certainty and often insist that they know the exact will of God on all matters. In other words, they do not share the Catholic or Orthodox idea of the “mystery of faith.” They also have a long history of cherry-picking from the Bible to justify their politics.

Some believe that Trump, like King Cyrus, is delivering them from the “captivity” of the Obama administration. Bible verses calling for obedience to government are used to justify immigration policies that seem to contradict the teachings of the Scriptures in relation to refugees and “strangers.” They find some verses useful and ignore others.

If the Obama Administration is their idea of “captivity,” obviously there’s no reasoning with these people. They are nuttier than a Payday bar. But this also explains the Trump/Republican bizarre obsequiousness to Bibi Netanyahu and their conflation of being anti-government of Israel with anti-Semitism. White evangelicals are anti-Semitic lovers of Israel because Israel fits into Dispensationalist ideas of prophecy; see Nancy LeTourneau, “A More Twisted Form of Anti-Semitism.” They’ve figured out a way to complain about alleged rising anti-Semitism on the Left while absolving themselves of the same sin.

Is there anything Trump could do to shake their faith? Maybe if it was proved he had paid mistresses to get abortions, but I doubt even that would do it. However, as Paul Waldman says, there aren’t enough of them to re-elect Trump by themselves. 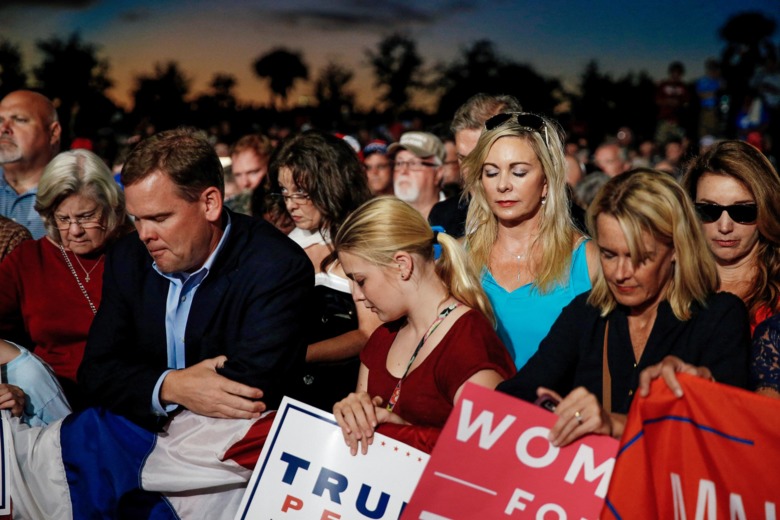