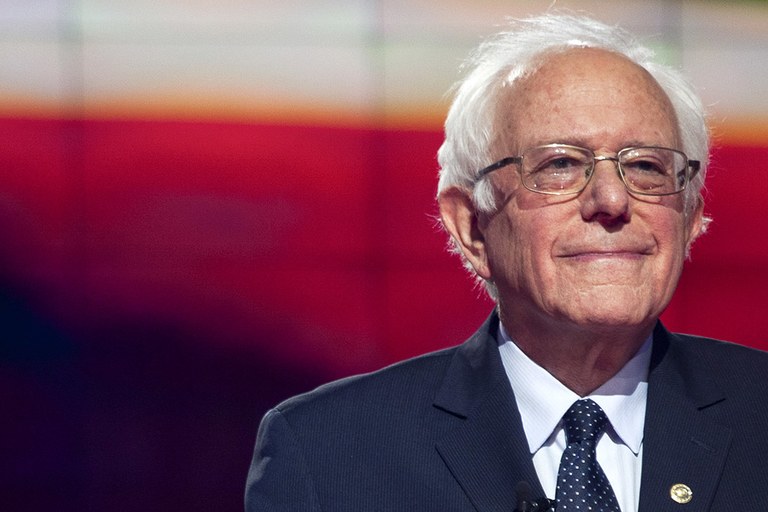 I don’t know who the 2020 Democratic presidential nominee will be. I can’t even say who I’m going to vote for. But I do want to offer thanks to Sen. Bernie Sanders for accomplishing something remarkable.

Thanks in large part to the Senator’s 2016 presidential campaign, it’s now okay for Democrats to talk about what’s wrong with capitalism and what might be done to fix it.

For example, Paul Waldman writes that “In 2020, we may finally get to talk about what kind of capitalism we want.”

The upcoming presidential election is starting to look as though it will feature something extraordinary, even revolutionary: a genuine debate about whether American capitalism needs an overhaul. The only surprising thing may be that it took a decade after the worst financial crisis in 80 years for us to get deep into this discussion.

It isn’t just happening in the presidential race, but that’s also where this kind of debate can play out in the most high-profile, attention-grabbing way. With everyone thinking about 2020, a proposal such as the Green New Deal immediately gets tossed into the presidential campaign, with candidates forced to take positions on it and their own proposals compared with it. And though not all of the Democratic candidates were prepared to get down to the fundamental question of what sort of capitalism we ought to have, they may have no choice.

You can call it a result of the Democratic Party “moving left,” but that may be too simplistic a way to think about it. It’s also about a new refusal among liberals to accept that the system as it exists now is how it has to be.

I am remembering a moment in the 2016 primary campaign that annoyed the hell out of me. In one of the few Democratic primary debates, in October 2015, Sen. Sanders said,

And what democratic socialism is about is saying that it is immoral and wrong that the top one-tenth of 1 percent in this country own almost 90 percent — almost — own almost as much wealth as the bottom 90 percent. That it is wrong, today, in a rigged economy, that 57 percent of all new income is going to the top 1 percent.

Those are some of the principles that I believe in, and I think we should look to countries like Denmark, like Sweden and Norway, and learn from what they have accomplished for their working people.

To which Hillary Clinton responded,

But we are not Denmark. I love Denmark. We are the United States of America. And it’s our job to rein in the excesses of capitalism so that it doesn’t run amok and doesn’t cause the kind of inequities we’re seeing in our economic system.

But we would be making a grave mistake to turn our backs on what built the greatest middle class in the history of the world.

What built the greatest middle class in the history of the world was the New Deal, which “centrist” Democrats like Clinton had long ago abandoned in all but name. But worse, the “we are not Denmark” line smacks of American exceptionalism and the notion that everything we do is best and we have nothing to learn from those other, inferior countries, an attitude that is slowly strangling us. It prevents us from even dealing with problems that other nations have addressed successfully. It assumes the status quo is the only way things can possibly be and to think otherwise is just crazy. It’s why we can’t have nice things.

But this year, several of the candidates are more than ready to talk about big, bold programs that smack of Scandanavian socialism. I don’t believe any of the crew currently running would be so tone deaf to say “we are not Denmark.”

Liz Warren just trotted out a proposal for universal child care. Kamala Harris wants to reverse the Trump tax cuts, raising taxes on the rich and giving working- and middle-class tax cut akin to the Earned Income Tax Credit giving up to $500 a month to families. Cory Booker is promoting a “baby bond” program that would give every child a US Treasury bond at birth. Several  are willing to go beyond saving Obamacare and toward Medicare for All. Several candidates have expressed support for the Green New Deal. And, of course, Bernie is still running on the issues he’s been running on for many years. I’ve heard very few noises about being “pragmatic” and “incremental.” Thanks goodness.

(And I realize that a lot of Bernie fans are going to reject any candidate but Bernie. Booker and Harris in particular already are being vilified as “corporate whores.” I’m too old to be that picky. It will be okay, I say.)

Paul Waldman writes that Republicans frame all economic issues as if the only alternative to our present system is Venezuela, and any deviation from free market, cut-taxes-on-the-rich ideology is nothing but insanity. (See, for example, this Marc A. Thiessen column. Even better, skip to column and just read the comments.) But now even the “establishment” Democratic candidates are not afraid to say that a problem is a problem, even if the Right disagrees, and to propose something new and bold to fix it.

And I say credit for this new boldness goes to Bernie Sanders. Even though he came up short in primary votes in 2016, he showed the Democratic Party that a whole lot of voters were tired of being told what they can’t have and that their concerns are not important. And many Democratic politicians now have a clue that “safe” and “cautious” and “incremental” doesn’t win elections. Even if he doesn’t claim the nomination this time — and I suspect it will be even harder for him than it was in 2016 — in a sense, he’s already won.

So now all we have to do is take back all of Congress and the White House, and we can start turning the country around again. Let’s hope.