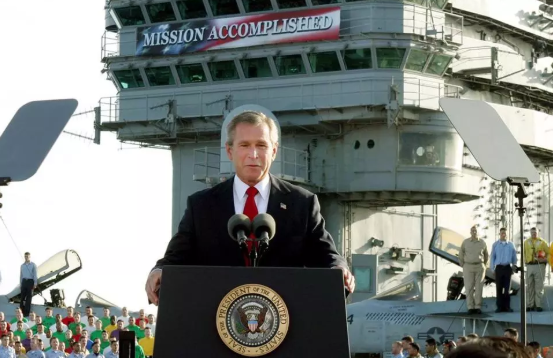 Paul Waldman reminds us that the invasion of Iraq was 16 years ago today. It says something that those seem like relatively innocent times compared to what we’re going through now. But Waldman’s question is, “What did we learn?”

Democrats learned a number of things. Many of them, including figures like Hillary Clinton and John Kerry, learned that trying to look “strong” by supporting military adventurism makes you look anything but. And they learned that their worst fears about what such adventurism can bring came true.

I don’t know that Kerry and Clinton really learned that. Well, Kerry, maybe. In 2008 he said, “Four years ago today, the United States Senate voted to give President Bush the authority to use force in Iraq. There’s nothing — nothing — in my life in public service I regret more, nothing even close. We should all be willing to say: I was wrong, I should not have voted for the Iraq War Resolution.”

But when he was running for POTUS in 2004, and many times since 2008, Kerry has claimed that he really truly opposed invading Iraq back in 2002 and only voted for the Iraq War resolution … well, he seems to come up with differing reasons for voting for the Iraq War resolution. FactCheck.org says that at the time Kerry was mostly supportive of invading Iraq but criticized how Bush was going about it.

Hillary Clinton has made several different excuses for the vote, ranging from an argument that she really just wanted Saddam Hussein to allow weapons inspectors back into Iraq (people forget that he did; Bush invaded anyway) to saying that yes, she was sorry about the vote, but having made that mistake made her uniquely qualified to not make it again.

However, I do think that other Democrats learned a lesson from the damage the vote did to Kerry and Clinton and have realized that it’s okay to oppose military adventurism. I believe that future Dems will not be so easily cowed by Republican war-mongering. So that’s something.

But what did Republicans learn? Waldman says, nothing.

It may have faded from most people’s memory by now, but in the 2016 presidential primaries the Republican Party was bedeviled by the question of Iraq, and specifically whether the war was a mistake. Though that was evident to every sane person in the country, it was a hard thing for those seeking to lead the party to admit, because their entire party couldn’t have been more enthusiastic about it at the time, and acknowledging the truth would mean criticizing the last Republican president.

The excuse is, of course, that the intelligence was wrong. But the real intelligence, meaning the genuine information available about Saddam Hussein’s capabilities and intentions,  wasn’t wrong. The morons in the White House refused to believe it because they wanted to go to war, so they made up their own intelligence.

Of the Republican candidates in 2016, Trump was alone in saying he wouldn’t have gone into Iraq, although that’s far from certain.

Yes, in typical fashion, Trump told a ludicrous series of lies about what a loud opponent he had been in 2003, even claiming that his opposition was so potent that the Bush administration sent a delegation to New York to beg him to tone it down. (In fact, he had said almost nothing publicly about the war and didn’t oppose it.) …

Trump ran for president saying he didn’t want to get entangled in more invasions like Iraq. But this wasn’t because he worried about the cost in human suffering or the threat to American interests, because he doesn’t care about human suffering and never demonstrated much conception of what American interests might be. His point was more that he wouldn’t invade someplace to spread democracy, nor would he favor military action to stop a genocide.

But what about the rest of the party?

But there’s absolutely no evidence that anyone in the Republican Party learned much of anything from the Iraq disaster. The next Republican president will probably be just as eager to launch an invasion or two as the last one was. You don’t hear them talk about the lessons of Iraq, because they didn’t draw any.

Within the GOP, the Bush Doctrine — or at least the part of it involving the belief that American military force is a useful tool to shape the world to our liking, and unintended consequences are not really anything to worry about — lives on. It’s just in suspended animation until Trump is no longer leading the party.

The Republican Party as we know it has to die.