A few days ago Barack Obama, at a “town hall” in Berlin, issued a warning against progressives and “purity” tests. “One of the things I do worry about sometimes among progressives in the United States — maybe it’s true here as well — is a certain kind of rigidity, where we say, ‘Oh, I’m sorry. This is how it’s going to be,’” Obama said. All these purity tests are going to fracture party unity and cause circular firing squads.

I admit I sometimes find myself getting annoyed by people who will not accept even a shade of difference from their ideal policy proposal. But IMO such people are a minority, and such people are not the Democrats’ real problem when it comes to purity tests.

The landslide defeat of George McGovern in 1972 may have persuaded the Democrats to avoid the appearance of radicalism, but by the defeat of Walter Mondal in 1984 a rising faction of the Democratic party believed that even the legacy of the New Deal was too far from the mainstream.

The Democratic Leadership Council formed in the 1980s to give the party a new direction, and that direction was to the Right. The DLC proposed to reduce the role of unions, get tough on crime, cut spending, balance budgets, “reform” welfare, and promote free trade. The DLC’s best-known chairman was Bill Clinton, and when Clinton won the White House in 1992 it enshrined the DLC agenda as party orthodoxy.

The DLC closed its doors in 2011, citing lack of cash. At the time, this was seen as a sign that the Democrats were moving in a more progressive direction. Ben Smith wrote in Politico,

“With President Obama consciously reconstructing a winning coalition by reconnecting with the progressive center, the pragmatic ideas of PPI and other organizations are more vital than ever,” [DLC co-founder Will] Marshall said.

The DLC’s demise is, however, is bringing no mournful elegies from the liberal groups who made its name a synonym for everything they saw as wrong with Bill Clinton’s party: what they saw as a religion of compromise, a lack of principle, and a willingness to sell out the poor and African-American voters at the party’s base.

“One of the things that’s happening right now in Democratic politics is that progressives are winning the battle for the party,” said Progressive Congress president Darcy Burner. “The corporate-focused DLC type of politics isn’t working inside the Democratic party.”

Yes, that was written in 2011. Somehow, in spite of all these “progressives,” the spirit of the DLC managed to live on in the Democratic Party. Michael Corcoran wrote for TruthOut in 2017,

“I don’t think the people who ran the DLC ever really left,” said Norman Solomon, a coordinator for RootsAction, in an interview with Truthout. “It is the same product, different name.” Indeed, the DLC agenda is carried out today by think tanks like the Progressive Policy Institute (PPI) and Third Way, which push the same regressive agenda but under different labels, and with less public scrutiny. As the Boston Globe described in 2014, Third Way usually works “behind the scenes — in the White House, the corridors of Congress, and the office suites of lobbying firms in downtown Washington.”

Note that PPI began as an offshoot of the DLC and was founded by the DLC’s Will Marshall. Also note that although from his photo he is only about 12 years old, Cocoran’s anlysis is worth reading all the way through. I am going to move on, though.

In 1992, the DLC approach may have been justified as a pragmatic accommodation to the dominance of Reaganism and movement conservatism. An influential paper from PPI argued in 1989 that Democratic “programs must be shaped and defended within an inhospitable ideological climate, and they cannot by themselves remedy the electorate’s broader antipathy to contemporary liberalism.” In other words, the Dems had to acknowledge that “liberalism” was a dirty word and that they were playing defense on the Right’s field. This, too, became party orthodoxy.

However, as the Right grew more extreme and less capable of so much as tying its shoes, never mind governing, Democratic Party orthodoxy didn’t adjust. Even after the “blue wave” years of 2006 and 2008, and the election of Barack Obama, Dem leaders remained stuck in 1992 and offered no real alternative to the Right. Democrats were rigidly fixed to the idea that they were playing defense in the Right’s field, and the only policy ideas that they would countenance were those considered to be “safe” and possibly even attractive to centrist Republicans.

What irks me about Dems who whine that the leftie-progressive wing are “purists” is that it’s the centrist-DLC-Third Way crowd, which has dominated the party agenda for many years, that set rigidly narrow limits on which policy ideas were considered legitimate and which were out of bounds and could not be taken seriously. Why aren’t they the “purists”?

Of course, Obama retorts, “You have to recognize that the way we’ve structured democracy requires you to take into account people who don’t agree with you, and that by definition means you’re not going to get 100% of what you want.” But the real problem the Democrats faced in 2016 wasn’t that they were too strident in putting forward a purist progressive vision. Rather, Clinton ran a campaign mostly about shielding Americans from the nightmare of Trumpism and not presenting dreams for the future. When people say they have been falling behind for the last 30 years and your retort is: “I can fix that, I’m experienced, I’ve been in politics for 30 years,” you might end up losing an election.

And that, my dears, is the most succinct explanation I’ve seen yet for why people just plain didn’t turn out to vote for Hillary Clinton in 2016.

This primary, Sanders and Warren are actually giving people a positive, comprehensible agenda to vote for, one that can speak to the justified rage of so many who are not willing to settle for a world destroyed by climate change, another year without basic healthcare, or continued precarious employment feel. For Obama, “We have to be careful in balancing big dreams and bold ideas with also recognizing that typically change happens in steps.” But incrementalism during the Obama years was small steps to nowhere, ones that far from cementing a new progressive majority actually helped open the door to the populist right.

He [Obama] became a viable candidate in 2008 in no small part because the party’s base was so disgusted with Democrats who voted for the Iraq War, including Hillary Clinton, Joe Biden, John Kerry, John Edwards, Charles E. Schumer, and Harry Reid. Obama, who had publicly opposed the war as a state senator in Illinois, was alone among the major candidates in being able to point to his opposition, satisfying a purity test that candidates such as Clinton and Edwards failed.

And that campaign was as hard-fought as nearly any in memory. When Obama won, there were some hard feelings to be soothed, but it didn’t stop the party from uniting around him.

And while it’s true that many of the Democrats running for president are embracing policies that are further left than what they may have supported a few years ago, they’re doing what presidential candidates always do: responding to their party’s voters. And it happens that the things they’re advocating, such as universal health care, a higher minimum wage, marijuana legalization or stronger action on climate change, are pretty popular.

One must also remember that the Democratic Party is not one thing. It has a range of voices in it, and even if figures from the left such as Rep. Alexandria Ocasio-Cortez are more prominent than their counterparts might have been at an earlier time, they’re doing what they ought to do: push the boundaries, challenge the status quo and force new issues and perspectives into the debate. Then the party as a whole can hash them out, which is what happens in presidential primaries. The resulting agenda will be the product of that process and hopefully something the whole party can get behind.

This is what political primary contests are supposed to do. Candidates put their ideas in front of the public, and the public votes. But for most of the 1990s and 2000s the  Democratic Party has functioned as a huge barrier that only allowed the most modest and unoriginal ideas to be promoted.

Even its one progressive signature bill, the Affordable Care Act, was a warmed over Heritage Foundation idea that had been tried out in Massachusetts by Mitt Romney. I would be the first to say that, as hard as it was to pass the ACA, a genuine single-payer bill wouldn’t have been possible in 2009. But it was the Democratic Party itself that had helped establish the parameters of what was too “radical” and what wasn’t.

You think the old DLC crowd isn’t still trying to set the agenda? This was in the New York Times this morning:

Senator Bernie Sanders, in a rare and forceful rebuke by a presidential candidate of an influential party ally, has accused a liberal think tank of undermining Democrats’ chances of taking back the White House in 2020 by “using its resources to smear” him and other contenders pushing progressive policies.

Mr. Sanders’s criticism of the Center for American Progress, delivered on Saturday in a letter obtained by The New York Times, reflects a simmering ideological battle within the Democratic Party and threatens to reopen wounds from the 2016 primary between him and Hillary Clinton’s allies. The letter airs criticisms shared among his supporters: That the think tank, which has close ties to Mrs. Clinton and the Democratic Party establishment, is beholden to corporate donors and has worked to quash a leftward shift in the party led partly by Mr. Sanders.

“This counterproductive negative campaigning needs to stop,” Mr. Sanders wrote to the boards of the Center for American Progress and its sister group, the Center for American Progress Action Fund. “The Democratic primary must be a campaign of ideas, not of bad-faith smears. Please help play a constructive role in the effort to defeat Donald Trump.”

Of course, much of the sniping of Sanders coming from the old Clinton crowd is about their irrational belief that he, and not her own shortcomings as a candidate, cost her the election in 2016. And I don’t want this to be just about Sanders, or just about the presidential field in 2020. This is about a powerful minority faction that assumes it has the sole right to determine who is a “real Democrat” and to set the agenda of the Democratic Party. And they don’t. Not any more.

Please also see The Wrong Way to Rebuild the Democratic Party (Politico, February 2017) by Leah Hunt-Hendrix; Even in Power, Democrats Are Proving To Be Their Own Worst Enemy (In These Times, January 2019) by Miles Kampf-Lassin. 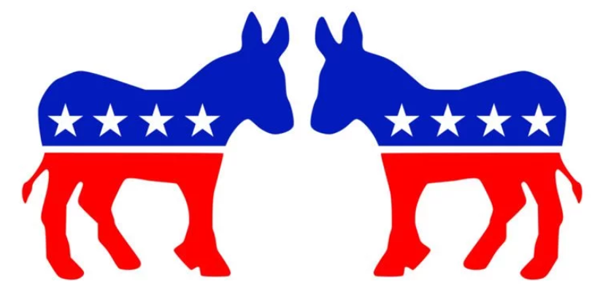 11 thoughts on “Democrats, Purity Tests, and a Certain Kind of Rigidity”