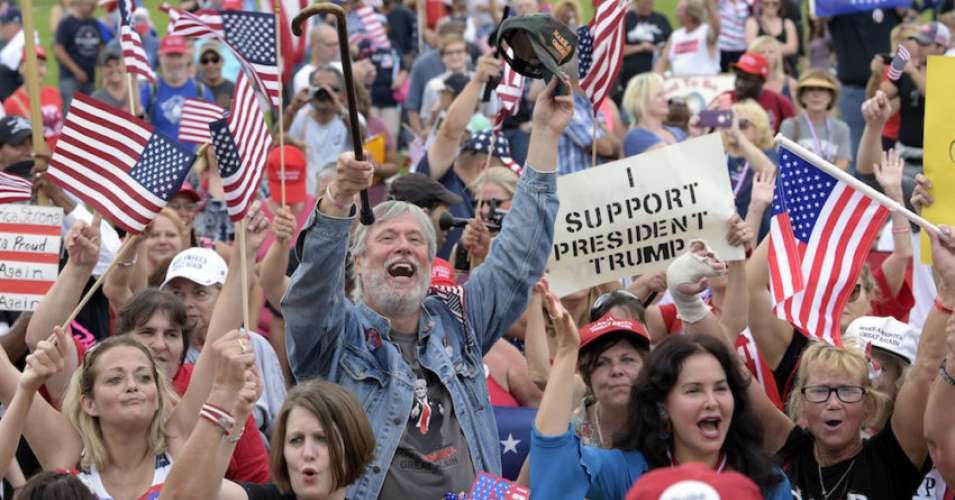 This week the Trump campaign was forced to withdraw a campaign video because Warner Brothers had objected to the unauthorized use of music from the 2012 film The Dark Knight Rises. This is far from the first time the Trumpettes were caught using intellectual property without permission; you’d think they’d learn.

I didn’t see the video before it was taken down. But the descriptions of it are fascinating.

Trump tweeted out a two-minute video at about 4 p.m. that used Hans Zimmer’s “Why Do We Fall?” from 2012’s The Dark Knight Rises and showed the following text in the font from the film’s title card:

“First they ignore you. Then they laugh at you. Then they call you a racist. Donald J. Trump. Your vote. Proved them all wrong. Trump: The Great Victory. 2020.”

There’s a much longer description here that is worth reading. But the primary question I want to explore here — after what the bleep? —  is, what does this tell us about Trump and his followers?

The first thing that struck me was the incomplete use of the famous quote, “First they ignore you. Then they laugh at you. Then they attack you. Then you win.” This quote is often attributed to Mahatma Gandhi, but there is no evidence whatsoever that Gandhi ever said it. What is it saying that the video added “Then they call you a racist” but left off the attack and the winning? Somebody is resentful about being called a racist, apparently. And how does winning an election “prove” that one is not a racist? Racists vote, alas.

More significant, to me, is the ambiguous use of “you.” Who is “you”? When I first read this, I read “you” as referring to Trump’s fans. But it can also be read as Trump referring to himself in the second person. And that’s what really fascinated me about this video. The blurring of identity between Trump and his fanatical base of voters says a lot, IMO.

Because he is a narcissist, Trump sees his fanatical fans as extensions of himself. His glory is theirs also; his “greatness,” which Trump sees reflected in their adoration of him, also reflects back on them. In his mind, they are a unit.

At the same time, many of our great social observers and philosophers — Erich Fromm, Eric Hoffer, Hannah Arendt — have long noted that alienated and insecure people easily surrender their own ego-identities and autonomy to mass movements and authoritarian strongmen. People march blindly into mass movements because the group provides something the individual feels is lacking in himself. Trump, to his fans, is a larger-than-life being of great power and certitude. By surrendering their autonomy to him, they feel that they absorb that power. Through Trump, they find connection, strength and a sense of belonging. The baffling, ambiguous world becomes a place of absolute clarity, with bright lines between good and bad, right and wrong, truth and lies, all as defined for them by Trump.

So the “you” is both Trump and his fans. But now let’s move on to the question of what Trump’s campaign promises other than The Great Victory.

Clearly, the withdrawn video offered validation. Your feelings and opinons are vindicated, it says. They call you racist, but you are right to feel as you feel, and they are wrong, and when we win we will be lords of the universe. Those who disrespect you will be shut up, at least, if not cast out.

Health care? Better wages? Access to higher education? Nah. Lords of the universe don’t need to worry about such things. Maybe the good stuff will come with the territory, once we overcome everyone we fear and hate. But in truth, Trumpism is not about government. It has no real ideology and no cause other than itself.

Greg Sargent writes that Trump’s appeal is built on cruelty, lies and hate.

At a fundraiser in Texas late Wednesday, Trump seethed that our military is constrained from getting “a little rough” at the border, because “everybody would go crazy,” preventing it from acting the way it would “normally act,” or how “another military from another country would act.”

He dimly realizes that most people would disapprove of U.S. troops firing on desperate families with small children, but he doesn’t really understand why. Empathy and compassion are alien to him.

Greg Sargent goes on to say that Trump genuinely believes that the border crisis — which is largely his own fault — will be a winning issue in 2020. He’s going to stoke up the fear and demagoguery to the eenth power. “Trump obviously believes that the worse this gets, the more easily he’ll persuade swing voters that the migrants are a criminal ‘infestation’ that must be repelled through cruelty or even force,” Sargent writes.

Indeed, Greg Sargent wrote elsewhere, cruelty is the point. It is not a means to an end; it is the end. Trump and his followers want the power to be cruel, to punish anyone they don’t like for, well, existing. The earth must be remade in Trump’s image, so that the faithful will have power and authority to hurt those they fear and resent. True power is the right to be cruel. True freedom is the power to deny freedom to others.

For the most rabid of Trump’s followers it hardly matters that he has betrayed them at every turn. He promised better jobs, lower taxes, better access to health care, and an end to the opioid crisis. He has utterly failed to deliver any of that; for the most part, he hasn’t even tried to deliver any of that. He doesn’t know how, frankly, and he’s not interested in learning. Other people were supposed to work out the details; that’s what flunkies are for.

Fortunately, there aren’t enough of them to re-elect him. But, Democrats: Don’t screw it up this time.

Related, from the Mahablog archives: