As I understand it, no one is taking responsibility for the church bombings in Sri Lanka that killed more than 200 people. Suspicions are pointing to a radical Islamic group called National Thowheeth Jama’ath, but I don’t know what evidence there is. Here I just want to toss out some general background.

Religious identity in Sri Lanka often is more about ethnicity than devotion. The majority ethnic group, the Sinhalese, is primarily Buddhist. Buddhism is believed to have reached Sri Lanka in the 3rd century BCE, and the island has played a large role in Buddhist history.

The most recent data says Sinhalese Buddhists are about 70 percent of the population, which is down a bit from older data. However, this identity as Buddhist does not necessarily translate into practice of Buddhism, except very superficially. It’s just that if you are a proper Sinhalese, you are supposed to be Buddhist.

The Tamils (about 11 percent of the population) are mostly Hindu. There are small populations of Moors and Malays who are Muslim.

About 7 percent of Sri Lankans, primarily Sinhalese and Tamils, are Christian, mostly Catholic. Christianity reached Sri Lanka beginning in 1508, when the first Portuguese merchants reached the island. The Sinhalese still tell stories about Portugues mercentaries slaughtering Buddhist monks and tossing babies to crocodiles if their parents didn’t agree to be baptised. Of course I don’t know if any of that is true, but it does speak to lingering hard feelings.

Eventually the Portuguese were expelled by the Dutch, and then after the Napoleonic wars the British took over and established the British Crown Colony of Ceylon. The British government encouraged Christian missionaries to open schools in Sri Lanka as a means of “civilizing” the simple brown natives, who of course had a rich culture already before the Europeans showed up and started smashing it. So throughout the 19th century Sri Lanka was permeated with Christian academies and missions.

Beginning in the late 19th century a Buddhist revival movement gained momentum, and that movement morphed into a national independence movement. In the course of this bit of history Buddhism became wired into national identity much more strongly than it had been previously. This is not unlike the way right-wingers in the U.S. identify as “Christian” even when appear to lack an iota of devotion and possibly haven’t said a prayer in years. Of course, there are devout Buddhists in Sri Lanka also.

You might remember that there was a long and terrible civil war between Tamils and Sinhalese beginning in 1983. Atrocities were perpetrated by both sides and more or less came to a bloody end in 2009.

It’s been relatively peaceful in Sri Lanka since then, although a few years ago there were some tense incidents between Buddhist monks and Christians and some incidents in which Sinhalese Buddhist mobs vandalized Christian churches.

I confess that when I heard of Christian church bombings in Sri Lanka, the first thing I thought was that it could be Buddhist extremists. But suicide bombings aren’t their style, so I’m inclined to think it could be Muslim extremists this time. But I have no idea why they would have targeted Christians and not Buddhists. 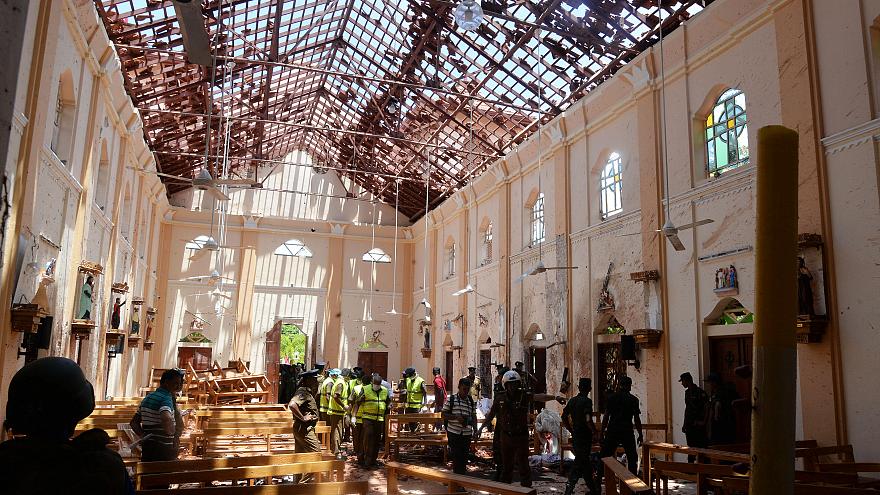 A church in Negombo, Sri Lanka, hit by a bomb blast on April 21

5 thoughts on “The Violence in Sri Lanka”