The pro-impeachment argument: The jerk deserves it. Hell, the Democrats’ have a duty to impeach Trump.

The constitutional scholar Philip Bobbitt of Columbia University is considered one of the leading academic experts on the question of impeachment, including what the authors of the Constitution thought on the subject. Bobbitt says that when considering impeachment the primary question isn’t whether the president committed a crime. “The initial inquiry is whether the acts of the president have struck at the processes underlying government itself,” Bobbitt says. Greg Sargent continues,

Bobbitt’s book engages deeply on what constitutes “high crimes and misdemeanors.” It concludes that “careful, patient inquiry” must denote a pattern of “wanton constitutional dereliction” and establish acts of misconduct that badly undermine the very “legitimacy” of the government and “seriously threaten the order of political society.”

Trump did not merely seek to derail an investigation into his campaign’s conspiracy with that Russian sabotage — that is, into his own conduct.

Rather, Trump also sought to derail a full accounting of the Russian attack on our political system, separate and apart from whether his own campaign conspired with it. He did this because acknowledging the sabotage would detract from the greatness of his victory, which also led him to fail to marshal a serious response to the next round of interference.

“The exposure of the country to very damaging political intelligence techniques, for the venal reason of not diminishing the status of your victory — would that be a high crime and misdemeanor?” Bobbitt asked. “It certainly would.”

Here is, as William Barr might call it, “the bottom line”: The Mueller report describes, in excruciating detail and with relatively few redactions, a candidate and a campaign aware of the existence of a plot by a hostile foreign government to criminally interfere in the U.S. election for the purpose of supporting that candidate’s side. It describes a candidate and a campaign who welcomed the efforts and delighted in the assistance. It describes a candidate and a campaign who brazenly and serially lied to the American people about the existence of the foreign conspiracy and their contacts with it. And yet, it does not find evidence to support a charge of criminal conspiracy, which requires not just a shared purpose but a meeting of the minds.

Here is the other bottom line: The Mueller report describes a president who, on numerous occasions, engaged in conduct calculated to hinder a federal investigation. It finds ample evidence that at least a portion of that conduct met all of the statutory elements of criminal obstruction of justice. In some of the instances in which all of the statutory elements of obstruction are met, the report finds no persuasive constitutional or factual defenses. And yet, it declines to render a judgment on whether the president has committed a crime.

Now, the House must decide what to do with these facts.

The House must act. Allowing Trump to slide on this offense is not acceptable.  And, certainly, a large part of the Democratic voter base is clamoring for impeachment. And there is the damned if they don’t part; failing to act on what Trump has done could seriously damage the party’s credibility, not to mention the nation.

But then there’s the damned if they do part. We all know that, at the present time, if the House votes to impeach the Senate will not vote to remove Trump from office. If it were even a remote possibility I’d say go ahead, but right now, it isn’t. Republicans in the Senate will protect Trump no matter what. They are in too deep to back away.

There are no more statements about how “troubled” they are by his behavior, no more attempts to distance themselves from his repugnant character, no more effort to prove that they retain something resembling integrity. They will defend anything, because that is what Trump demands.

And when the Senate leaves Trump in office, it might seem that Trump has been exonerated. I’m not sure everyone screaming for impeachment understands that. An impeachment also is likely to fire up his base and get them to the polls in 2020, no matter how much his incompetence has screwed up their lives.

For months Nancy Pelosi has been pushing back against use of the I word. She has more or less re-stated this position since the release of the Meuller report. But she wrote in a letter to House colleagues, “While our views range from proceeding to investigate the findings of the Mueller report or proceeding directly to impeachment, we all firmly agree that we should proceed down a path of finding the truth.”

Pelosi’s position might be re-stated, Hold the hearings; send the subpoenas. Just don’t use the ‘I” word. Not until something is discovered that will force Senate Republicans to throw Trump under the bus will we use the “I” word.

There’s a real question whether anything the House might discover would move Republicans to do the right thing, of course.

But  here’s another wrinkle. Trump’s own lawyers have taken a step that might backfire big time. Today Trump filed suit in federal court against his own accounting firm, Mazars USA, and Rep. Elijah Cummings, chairman of the House Oversight Committee.

The lawsuit, filed in federal court in the District of Columbia, seeks a court order to squash a subpoena issued last week by the committee to Mazars USA. Trump’s lawyers also are asking a federal judge to temporarily block the subpoena until the court has had a chance to review their request.

The move amounts to Trump — the leader of the executive branch of government — asking the judicial branch to stop the legislative branch from investigating his past.

Elie Mystal writes at Above the Law that it’s possible this suit will force Democrats’ hands.

This lawsuit (you can read it here on Axios) is meant to block subpoenas from House Oversight of Mazars USA, Trump’s longtime accountant. Trump org’s argument is that the subpoenas exceed Congressional power because they’re being issued without concrete legislation in mind.

The theory that Congress can only issue subpoenas to investigate issues they are directly intending to legislate on is untested. The convention is that Congress has broad subpoena power and reading it narrowly would obviate much of the work of committees like the House Oversight Committee. Moreover, in the instant case, House Oversight has a good argument that it is indeed intending to offer legislation that would prohibit Trump’s particular attempts to hide his business dealings from the American public while serving as President. 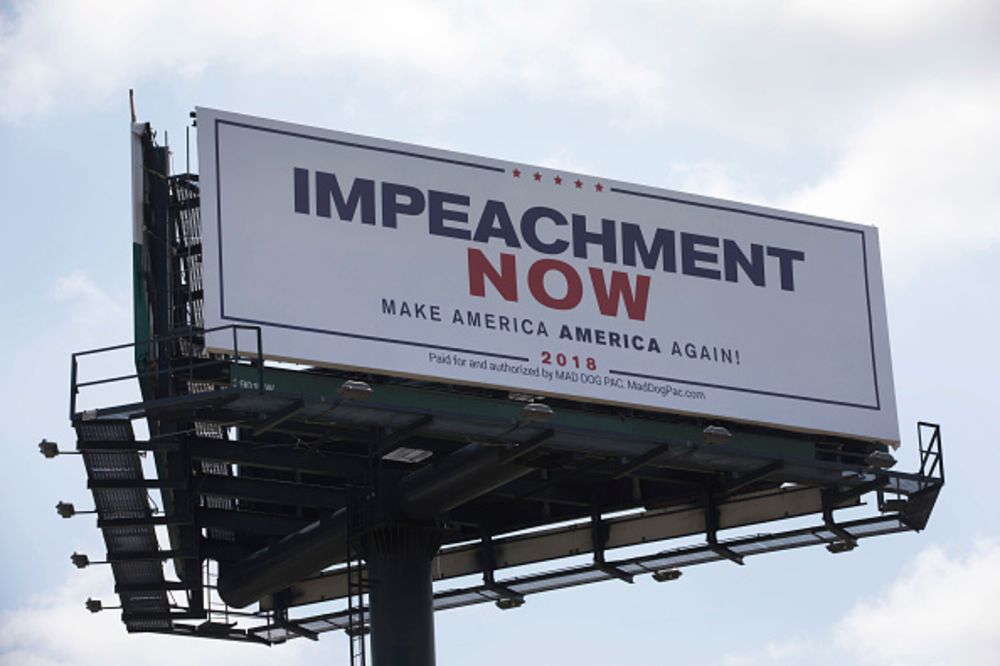