What the report revealed, page after page, was President Donald Trump and his campaign’s efforts to profit from the most “sweeping and systematic” — to use the words of the report — information warfare attack ever waged against the United States of America.

Trump and his team were uniquely positioned to sound the alarm and halt the Russian attack, but instead they welcomed it. And then they tried to obstruct efforts to investigate it. As such, Trump bears distinct responsibility for our failure to defend against Russia’s hostility and take the steps necessary to deter future threats.

More damning, IMO, is that Trump has done precisely nothing to prevent similar interference in the 2020 election, which is bound to happen. There have been noises coming from people in his administration that there are things that need to be done, but Trump takes no interest in the issue and provides no leadership.

Cybersecurity experts praised Thursday’s briefing as an important step to bringing high-level focus to the fight against interference. But they said that to deter Russia, Moscow needs to believe that the United States will impose costs beyond the sanctions and other punishments it has doled out, and that requires Mr. Trump to make clear he will act against interference.

“If you are going to stop what is going on, that could require a presidential-level decision,” Mr. Sussmann said.

And what has Trump done? After dragging his feet on implementing sanctions on Russia ordered by Congress, earlier this year he prematurely lifted sanctions he had grudgingly put into place. So the U.S. remains vulnerable.

And, of course, there’s the obstruction of justice; the campaign finance violations, including violations in the inaguration funds; violations of the emoluments clause; and the possibility that Trump is compromised by foreign business ties, including to the Russian mob. Mueller didn’t even try to chase that down, it seems. It’s true that none of these allegations have been proven in court, but Trump is resisting any attempt to get to the truth.

I agree with Josh Marshall that we’ve gone beyond corruption as usual.

The White House isn’t doing the standard tussling with Congress about oversight: some stonewalling, some negotiation, taking some questions of privilege to court. It’s more accurately characterized as massive resistance. The Congress has a constitutionally mandated responsibility to oversee the executive branch. They are flatly refusing to comply with ordinary document production and testimonial requests across the board. It’s not a difference of degree but of kind.

And as far as I can tell, it’s unprecedented. Has any other president sued a House committee chair to block a subpoena? I don’t know. Nixon withheld White House tapes; Haldeman withheld grand jury testimony. That’s as close as I can get. Today the White House ordered a former official to ignore a subpoena. House Democrats are engaged in hearings and investigations, but will that be enough?

The big error I see so far is that these joustings are being treated as legitimate legal processes which must be allowed to work their way through conventional processes and the courts. That’s not right and it gives the President free rein to try to run out the clock on any sort of oversight. Democrats need to find a language for the political debate that makes clear these are not tedious legal processes which will run their course. They are active cover-ups and law breaking, ones that confirm the President’s bad acting status and add to his and his top advisors legal vulnerability.

That’s getting there. Trump is still obstructing justice, still covering up what appear to be crimes. This has to be plainly said, even if Nancy Pelosi has put a gag on the I word. And maybe the best way to do that is to take the gag off the I word. 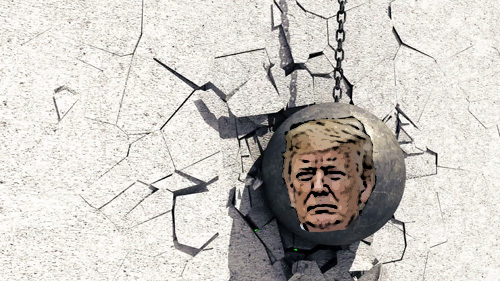