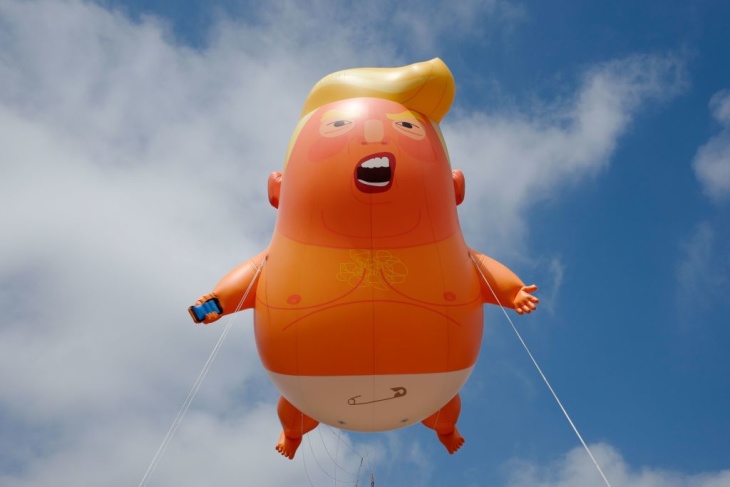 So this just happened:

President Trump abruptly ended a meeting with Democratic leaders on Wednesday, saying he was unable to work with them on legislation following comments by House Speaker Nancy Pelosi (D-Calif.) that he was “engaged in a coverup.”

Trump made an unscheduled appearance in the Rose Garden shortly afterward and in a meandering 10-minute address said he had left the meeting with Pelosi and Senate Minority Leader Charles E. Schumer (D-N.Y.) at which they were supposed to talk about working together on a $2 billion infrastructure plan.

“Instead of walking in happily to a meeting, I walk in to look at people who said I was doing a coverup,” Trump said, adding that he can’t work on infrastructure “under these circumstances.”

Here was the scene for the completely unscheduled and spontaneoous appearance that he hadn’t at all planned on making this morning: 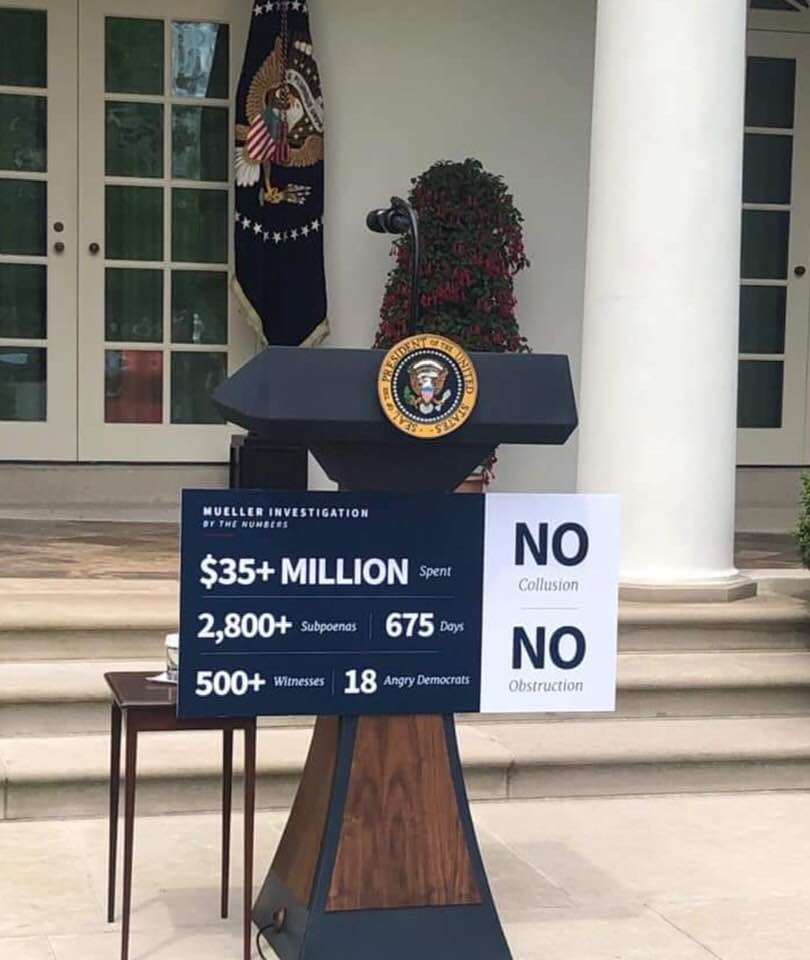 Very early this morning Trump was tweeting about witch hunts already. BTW, it’s not clear what the Mueller investigation cost, but there are estimates it could have paid for itself through collected settlesments, mostly from Paul Manafort.

Anyway — I’m sure nobody on the Democratic side had any illusions there was a real chance Trump would keep any commitment to a $2 billion infrastructure plan. So nothing was lost here.

Also, before the infrastructure meeting had broken up, Greg Sargent wrote,

Trump is set to meet with House Speaker Nancy Pelosi and Senate Minority Leader Chuck Schumer to discuss their previous agreement-in-principle to a $2 trillion infrastructure package.

But Trump has now blown up these negotiations with a new broadside — a letter demanding that Democrats pass his renegotiated North American Free Trade Agreement, and insisting he will not consider infrastructure until that’s done.

“Before we get to infrastructure, it is my strong view that Congress should first pass the important and popular USMCA trade deal,” Trump wrote in the letter to Pelosi and Schumer, in a reference to the United States-Mexico-Canada Agreement, which is NAFTA 2.0. After this is passed, Trump continued, “we should turn our attention to a bipartisan infrastructure package.”

Sargent points out that on both NAFTA 2.0 and infrastructure, Trump needs the House Democrats a lot more than they need him. Democrats want an infrastructure package, but only if it is paid for through progressive taxation and not through some cockamamie tax incentive plan to corporations. But anything paid for by taxes is not going to get through the current Senate. Of NAFTA 2.0, Waldman says, “Many congressional Democrats won’t support it without changes strengthening its labor protections, and view its intellectual property protections as a giveaway to Big Pharma.”

Trump, on the other hand, needs to be able to brag about accomplishing a better trade deal and an infrastructure plan as he runs for re-election.  But now Trump says he can’t work on those things because those mean, nasty Democrats are investigating him.

“I walked into the room and I told Sen. Schumer and Speaker Pelosi, ‘I want to do infrastructure’ … but we can’t do it under these circumstances,” Trump said at a last-minute Rose Garden event.

Trump’s anger appears to have been sparked by comments Pelosi made earlier in the day when she said, “We believe the president of the United States is engaged in a cover-up” by blocking White House aides from giving testimony and responding to document requests from ongoing congressional investigations.

Dude — you’re blocking testimony and ignoring subpoenas. That’s covering up on its face. And then he turned it around and claimed the Democrats can’t be serious about working on legislation while they are also investigating him, not realizing that most  people really can walk and chew gum at the same time. If he thinks he somehow has leverage over the Dems and can scare them into not investigating him, or something … what leverage? I’m not seeing any leverage. He’s the one who needs to be able to say he did something about infrastructure. He’s the one who needs NAFTA 2.0 to not go down in flames.

Martin Longman advises Dems to just go ahead and write their own bill and then campaign on it next  year.

I think the House should hold extensive hearings on the country’s infrastructure needs and how they can use a major bill to address climate change. They should pass the bill at the end of the year and then campaign on the issue when the Republican-controlled Senate inevitably lets the infrastructure issue die in Congress.

There are a lot of voters out there who will take the Democrats side in that debate.