Didn’t see this coming — last week Sheldon Whitehouse and four other Democratic senators  filed an amicus brief in a Second Amendment case the SCOTUS is considering. And it’s some brief.

“The Supreme Court is not well. And the people know it,” writes Whitehouse, who is listed as the attorney of record on the friend-of-the-court brief. “Perhaps the Court can heal itself before the public demands it be ‘restructured in order to reduce the influence of politics.’ ” The phrase is from a poll question with which a majority of Americans agreed.

Democratic Sens. Mazie Hirono (Hawaii), Richard Blumenthal (Conn.) Richard J. Durbin (Ill.) and Kirsten Gillibrand (N.Y.) joined the incendiary brief, which questions whether the court’s conservative majority — nominated by three Republican presidents — is motivated by partisan intent and is in the pocket of the National Rifle Association and the Federalist Society, a conservative legal group.

“Out in the real world, Americans are murdered each day with firearms in classrooms or movie theaters or churches or city streets, and a generation of preschoolers is being trained in active-shooter survival drills,” Whitehouse writes. “In the cloistered confines of this Court, and notwithstanding the public imperatives of these massacres, the NRA and its allies brashly presume, in word and deed, that they have a friendly audience for their ‘project.’ ”

The senators are challenging the legitimacy of this court to rule on cases touching on partisan issues, which is a damn ballsy thing to do. I’m impressed. And this could be read as a warning to Chief Justice Roberts to avoid letting his court turn into a rubber stamp for right-wing interests. Or else.

The brief itself is less a legal document than a declaration of war. Though parts of it argue that the high court lacks jurisdiction over this case, New York State Rifle & Pistol Association v. City of New York, the thrust of the brief is that the Supreme Court is dominated by political hacks selected by the Federalist Society, and promoted by the National Rifle Association — and that if those hacks don’t watch out, the American people are going to rebel against them.

New York State Rifle, Whitehouse writes, “did not emerge from a vacuum.” Rather, “the lead petitioner’s parent organization, the National Rifle Association (NRA), promoted the confirmation (and perhaps selection) of nominees to this Court who, it believed, would ‘break the tie’ in Second Amendment cases.” That promotional effort includes $1.2 million Whitehouse says the NRA spent on television advertisements supporting the confirmation of Brett Kavanaugh.

The City of New York actually rescinded the law that is being challenged by the gun-rights people to stop the case from going to the Supreme Court, so I don’t see how the case is not moot. The law put restrictions on transporting firearms that the Rifle & Pistol Association thought were unreasonable.

In another interesting development of a couple of weeks ago —

In a letter from Nadler and Rep. Hank Johnson (D-Ga.), another senior Judiciary Committee member, the lawmakers said accessing the records are essential to “the public’s faith in the integrity of the judiciary.”

It may be too much to hope for that they might move to impeach Kavanaugh, but at the very least the SCOTUS is on notice that they need to act carefully or face consequences. 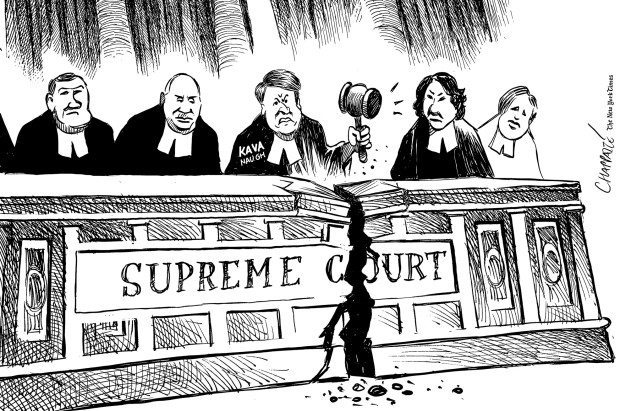