I didn’t expect that Mike Bloomberg would win America’s love with his charm, since he doesn’t have any, but I didn’t expect him to go down in flames quite as badly as he did last night. Perhaps I should have. The Bloomberg on the stage last night was pretty much the Bloomberg I remember as el alcalde de Nueva York. (If you didn’t watch the debate, Laura Quint provides a blow-by-blow account that’s worth reading.)

I think it’s stretching the truth a bit to say that Bloomberg was ever “popular” in New York. His approval ratings most of the time were better than his two predecessors, Rudy Giuliani and David Dinkins. But that’s setting a low bar. Giuliani in particular had just plain exhausted the city with his issues and his antics until the September 11 attacks allowed him to exit in a state of grace. But Bloomberg became mayor and stayed mayor for three terms mostly because he bought himself a whole lot of influence, and there were no strong election challengers to topple him. White voters, at least, liked him okay, stop and frisk notwithstanding. Police brutality toward racial minorities was hardly a new thing in New York City. But I never sensed a deep pool of affection for Mayor Bloomberg even in New Yorkers who thought he was a good enough mayor.

Still, one would have thought he would have known to smile or try to fake a personality. The small man people saw in Las Vegas was a cold, humorless mashup of Lex Luthor and early Scrooge McDuck. Even worse for Bloomberg, last night’s debate drew record viewership. He would have been better off avoiding the debates entirely. I wonder if he’ll show up for the next one.

Mother Mary, the man looked like he’d rather be anywhere else than on that debate stage in Las Vegas, being eviscerated by these members of the peasant class. It began when Senator Professor Warren—who far and away had the best night up there, no matter how painful that is to certain members of the pundit class whose names rhyme with Fryin’ Billiams and Stare McLaskell—pounded him on the very first question of the debate by throwing back at Bloomberg some of his own intemperate remarks about women, at which point he looked, as Abraham Lincoln said of William Rosecrans after Chickamauga, like a duck that had been hit on the head.

Was he always that bad a candidate? I have to say, yes. It was kind of a fluke that he got elected the first time, but after that he owned enough of the town and its influencers that he didn’t have to work that hard to keep the job. But yesterday he had to step outside his influence bubble and expose himself to normal people, and he wasn’t prepared for it. It was stunning how much he wasn’t prepared for it.

What a catastrophe Wednesday night was for Mike Bloomberg. The New York plutocrat was kicked in the teeth by Elizabeth Warren in the first minutes — she denounced him as a Trump-like “arrogant billionaire” who called women “horse-faced lesbians” — and never made it back to his feet.

Bloomberg stood in mute fury as his $400 million campaign investment went up in smoke. His contempt for democracy and sense of entitlement surpass even Donald Trump, who at least likes crowds — Bloomberg’s joyless imperiousness makes Trump seem like Robin Williams.

Taibbi goes on to document the many political and media elites who had touted his candidacy and how much money they or their organizations had received from Bloomberg. Do read it the entire column.

The night belonged to Liz Warren more than anyone else. And it breaks my heart she isn’t the front runner right now. Over the past few months I have been told, many times, that Warren can’t win or that Warren couldn’t stand up to Trump in a one on one debate.  I never bought into that belief, but it was hard to argue against it. I had nothing but my own gut feeling saying it was wrong.

But after last night, we know for a fact that Warren would be brilliant one on one against Trump. In fact, I believe she’d be the sharpest adversary against Trump we could nominate. As much as I like Bernie, I don’t see him eviscerating Trump as expertly as Warren gutted Bloomberg last night.

Sen. Elizabeth Warren’s breakout debate performance in Las Vegas on Wednesday night is drawing wide acclaim for her brutal dismantling of Mike Bloomberg, who appeared shaky and unprepared. By repeatedly savaging one “arrogant billionaire,” as Warren put it, she induced many to envision her woman-handling the other “arrogant billionaire,” the one tweeting maniacally from the White House.

Most people ranking winners and losers are giving strong marks to both Sanders and Warren. Most of the rest of the night was taken up by squabbling between Amy Klobuchar and Pete Buttigieg, who clearly can’t stand each other, with the occasional forgettable interjection from Joe Biden. It may be that the flirtation with Buttigieg and Klobuchar as the possible “moderate” saviors who might unify the party and take the nomination away from front-runner Sanders will cool off a bit now. I don’t see that happening. But a lot will depend on the results in Nevada and South Carolina. 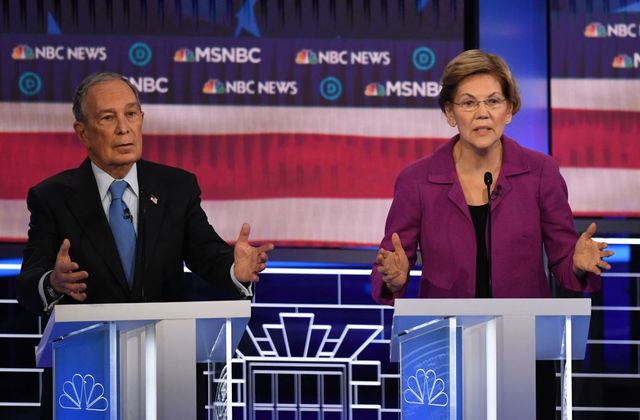 15 thoughts on “The Bloomberg Implosion”