I’m reading that the Senate has nearly come to blows over the third stimulus bill. Democrats need to hold their ground; it’s a terrible bill. This Vox article explains the main ponts of contention pretty clearly. See also Greg Sargent, The GOP just smuggled another awful provision into the stimulus and Paul Waldman, Why we can’t trust Trump on the big bailout ‘slush fund.’

The primary issue is the “slush fund” which would give Steve Mnuchin a half trillion dollars to hand out to corporations enitrely at Mnuchin’s discretion, with no transparency whatsoever. Mnuchin is thoroughly corrupt; I wouldn’t trust him to watch my coffee for ten seconds. See Charles Pierce, No Thinking Person Would Vote to Give Steven Mnuchin a Blank Check.

Five GOP senators are in quarantine — Rand Paul is infected — and Mitch McConnell is resisting holding a remote vote. The Republican 53-47 majority has shrunk to 48-47, and Republicans need 60 votes to move forward. And so far, the Democrats have been united. Even Joe Manchin is refusing to switch sides and got into a shouting match with Mitch McConnell today —

“And it looks like we’re worried more about the economy than we are the health care and the wellbeing of the people of America,” the West Virginia senator complained.

Good for you, Senator. But as it is, the Senate can’t do anything without some Democratic votes, and so far the Dems are standing together. We’ll see if McConnell budges. No doubt the plan all along was to slam the Dems on obstructionism, anyway. But they need to pass a bill. Somebody must budge.

The NY Times editorial board:

Senator Mitch McConnell of Kentucky failed to do his job this weekend. As the economy spiraled downward, Mr. McConnell, the Senate majority leader, said he would produce a bipartisan bailout bill authorizing an infusion of desperately needed aid.

Instead, Mr. McConnell emerged on Sunday evening with a bill that would provide a lot of help for corporate executives and shareholders, and not nearly enough for American workers. It would let the Treasury Department hand out hundreds of billions of dollars to corporations — potentially including businesses owned by President Trump — without requiring a binding commitment to preserve jobs and wages. And the bailouts could remain secret for six months.

Senate Democrats, refusing to play along, blocked the bill in a procedural vote on Sunday night and again on Monday afternoon. But responsibility for the deadlock rests squarely on Mr. McConnell’s shoulders.

The markets fell further today, which no doubt has the Creature in the White House enraged. It’s up to you, Mitch. As I write this Trump is on the teevee saying the Senate should pass the bill as written. This should not be a time for political agendas, he says. Like that GOP isn’t a political agenda? 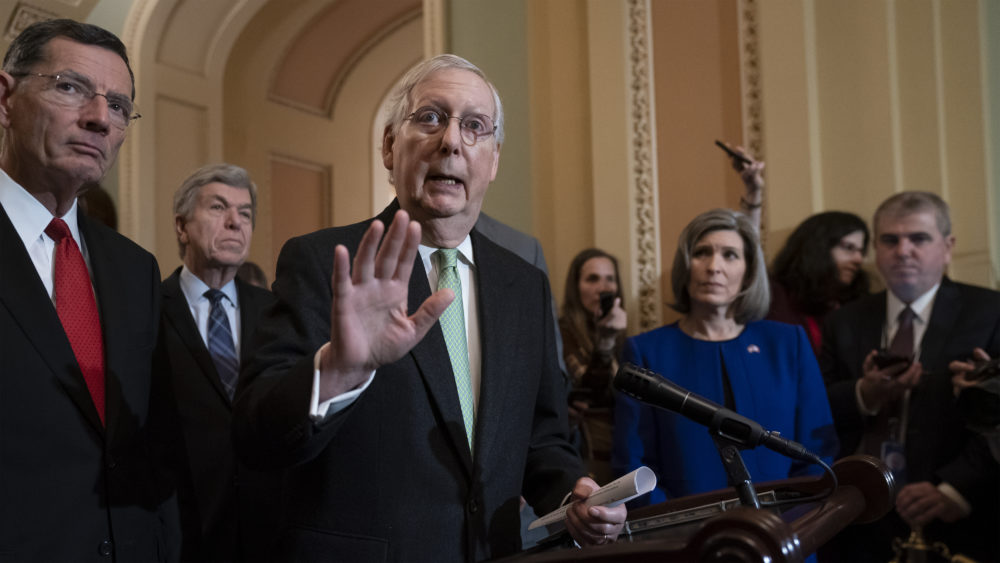 6 thoughts on “Mitch Gets Obstructed”