When he signed the phase three relief bill yesterday, Trump added a signing statement saying that the oversight part of the bill wouldn’t be enforced, and he’s not too keen on some other parts, either.  Here is the signing statement, obviously written for Trump by some lawyers, if you want to read it.

In a signing statement released hours after Mr. Trump signed the bill in a televised ceremony in the Oval Office, the president suggested he had the power to decide what information a newly created inspector general intended to monitor the fund could share with Congress.

Under the law, the inspector general, when auditing loans and investments made through the fund, has the power to demand information from the Treasury Department and other executive branch agencies. The law requires reporting to Congress “without delay” if any agency balks and its refusal is unreasonable “in the judgment of the special inspector general.” …

… But in his statement, which the White House made public about two hours after the president signed the bill, Mr. Trump suggested that under his own understanding of his constitutional powers as president, he can gag the special inspector general for pandemic recovery, known by the acronym S.I.G.P.R., and keep information from Congress.

Of course, the only reason he would want to keep such information from Congress is that he’s funneling the money to his deep pocket political supporters and his own businesses. An honest president wouldn’t have any problem with the oversight.

In other news, now Trump is pushing to get his signature on the $1200 checks going out to individuals. Usually, a disbursing officer’s signature would be on such checks. Those of us who get tax refunds through direct deposit will avoid the dreaded signature, of course. But considering that the paper checks will be considerably slower than the direct deposits, possibly by months, this may not do Trump any good, politically. (Does anyone remember if George Dubya Bush’s “tax rebate” checks of 2001 had his signature on them?)

Among the weirder bits of news today — Trump announced he was “thinking about” putting a quarantine on New York, and maybe New Jersey and parts of Connecticut as well. It’s not clear to me whether “New York” refers to the city or the state. It’s also not clear to me what good that would do now. Andrew Cuomo was not consulted.

The Lost Month: How a Failure to Test Blinded the U.S. to Covid-19, the New York Times.

Executive summary: Everyone in an administrative capacity in the Trump Administration is grossly incompetent, with the exception of Dr. Fauci.

The missing six weeks: how Trump failed the biggest test of his life, the Guardian.

“The US response will be studied for generations as a textbook example of a disastrous, failed effort,” Ron Klain, who spearheaded the fight against Ebola in 2014, told a Georgetown university panel recently. “What’s happened in Washington has been a fiasco of incredible proportions.” 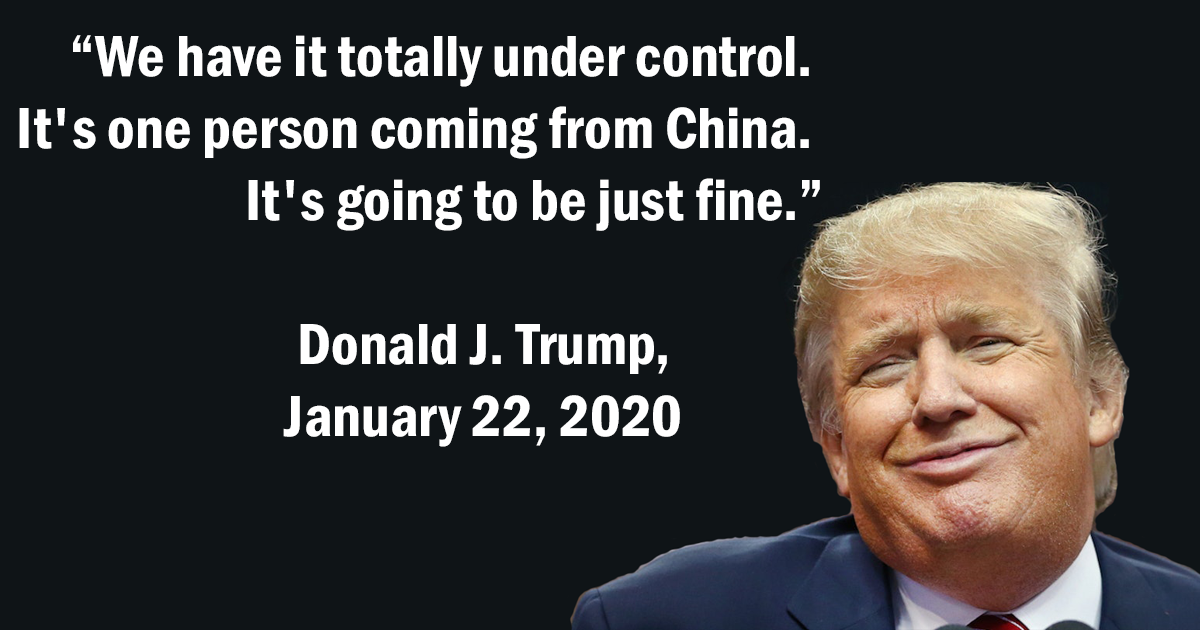 9 thoughts on “So Much for Oversight”