So far, the pandemic has hit big cities/blue states a lot harder than rural areas/red states. But that’s likely to change. Nate Silver wrote a couple of days ago,

Overall, although the number of detected cases is higher in blue states, the number is increasing at a more rapid rate in red states.1 Moreover, blue states have conducted more tests per capita than red states, so — given that the large majority of coronavirus cases remain undetected — the lower rate of cases in red states may partially be an artifact of less testing.

It already has changed, actually. New York City is being slammed, but if you remove New York, the distribution between red and blue states looks a lot more even.

About three-quarters of the confirmed cases in the United States are in states that voted for Hillary Clinton in 2016, according to data compiled by Johns Hopkins University. About half are in New York alone. …

… If we take New York out of the mix, the distribution of confirmed cases still indicates that blue states, which often are more heavily urban and populous, have the most cases. But this also reveals there are a number of states that preferred Trump in 2016 and now have a significant number of cases. …

… What’s important is that the number of cases has increased significantly across the board. In states that voted for Clinton in 2016, which make up three-quarters of known cases, the number of new confirmed cases from March 17 to March 24 increased by an average of 530 percent.

In red states, the average increase was 860 percent.

It’s now widely believed the rapid spread of the virus in Louisiana began with the big crowds in New Orleans for Mardi Gras, February 25.

And then there’s Florida, whose utterly worthless governor refused to close beaches for spring break and who still hasn’t issued shelter-in-place orders for his state. Instead, Gov. DeSantis has become obsessed with keeping New Yorkers and other “foreigners” out of Florida. It appears DeSantis was the one who put the idea of putting all of New York under quarantine into Trump’s head. Trump was talked out of it last night some time. See also Florida begins coronavirus checkpoints, threatens jail time for out-of-state travelers who don’t self-quarantine.

In truth, there’s no question that the virus is spreading freely within Florida and is past the point of containment. “The number of confirmed coronavirus cases in Florida is doubling every three days,” it says here. It’s way too late to keep the virus out. In a couple of months, Floridians may be trying to escape to New York.

As the pandemic spreads into rural areas, another big weakness in our sorry-ass health care system will soon come into view — the shortage of rural hospitals. More than half the counties in America have no intensive care beds, it says here.

Even in heavily impacted blue states, though, there is a significant partisan difference in how people understand the crisis, with Democrats taking it more seriously than Republicans. “Republicans consistently report less concern about the virus and that they’re taking fewer actions meant to slow the virus’s spread,” writes Philip Bump at WaPo. We’ll see if that attitude persists when the pandemic gets personal. Right now, it’s still an abstraction.

At Rolling Stone, Sean Woods says that the coronavirus pandemic can be compared to a fast-motion climate crisis.

Warnings about the crisis went unheeded. Scientists were ignored and called doomsayers. The press accounts were labeled fake news and brushed aside. “The cure would be worse than the illness” went the argument. Government watchdogs saw their budgets gutted. Lawmakers misled the country and did more harm then good. We were told by leaders that “everything was under control” or that the worry was nothing more than “a hoax.” …

…The mishandling of the coronavirus has terrifying parallels to the climate crisis. It’s difficult to think about the other civilizational calamity on our doorstep. It’s much easier to be consumed by what’s happening right now, or better yet to hunker down and binge watch your favorite shows and hope the plague passes over. But we cannot. Both tests call for innovation and a collective response. During the pandemic, we have witnessed failures of leadership but also incredible bravery, resolve, sacrifice, and innovation. That is the blueprint for our future. …

… In the face of the coronavirus and the climate crisis, any ideology that worships profit above all else, that trumpets individualism above the common good every single time, is simply a roadmap to self-immolation. As Congresswoman Alexandria Ocasio-Cortez told Rolling Stone’s Tessa Stuart, “It’s not just about the science — it’s about the systems that protect all of the power that goes into defying the science.”

I’m reading that in places like New York, the peak probably will hit about mid-April. In rural areas, it will be later. And it is possible — no one really knows — that the spread of the virus will slow as the weather warms up. But even if that’s so, it will be back in the fall. There won’t be any escaping it. 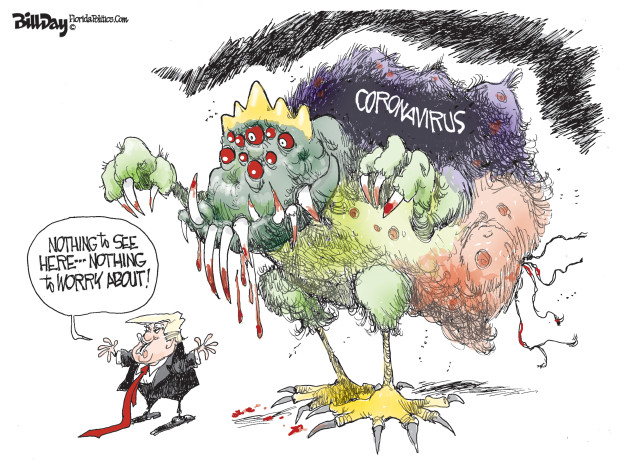