The truth is, there’s little about the pandemic restrictions that are new; they are just new to most of us, because they haven’t been used for a long time. During the 1918-1920 flu pandemic, for example, many U.S. cities closed schools, churches, theaters and other entertainment venues, and banned public gatherings in general. Just exactly what is happening now.

Enforced quarantine orders were common in the late 19th and early 20th centuries. A lot of those old-time epidemics were deadly — typhoid, diptheria, cholera. Cholera was especially feared; two pandemics in the early 19th century killed approximately 150,000 Americans, a big chunk of the population at the time. We don’t remember this stuff because vaccines and better public sanitation made the need for quarantines rare, until now. If you are old enough to remember the 1950s, you might remember local closings, especially of theaters and swimming pools, during polio outbreaks. But that’s about it.

The issue of how these restrictions square with constitutional rights has been debated and written about since the 19th century also. Very generally, the authority of the federal government to restrict commerce and gatherings during an epidemic is is said to be found in the commerce clause — Article I, Section 8, making this a power of Congress. But note that our current federal government hasn’t officially closed anything; it has only made recommendations.

It has been left to states, counties, and cities to enact restrictions officially. These levels of government have broader authorities to use police powers to protect the public during emergencies. “The public health authority of the states derive from the police powers granted by their constitutions and reserved to them by the 10th Amendment to the U.S. Constitution,” it says here. Again, there is a ton of legal precedence and case law going way back to support states and cities using police powers during a public health emergency. It’s not new.

These powers do have some limits, it says here:

Under the 5th and 14th Amendment’s rights of Due Process and Equal Protection, public health regulations used to impose such conditions can’t be “arbitrary, oppressive and unreasonable.”

There are precedents where courts have ruled that states or local governments didn’t meet a burden of proof to justify a quarantine. For example, in 1900 courts ruled against the city of San Francisco when it tried to inoculate and then quarantine Chinese residents against the bubonic plague when the courts had doubts that plague conditions existed.

But when plague conditions clearly do exist, state and local governments can close businesses and break up your block party until those conditions no longer exist. This is not unconstitutional.

….It is the decision of the President, and for many good reasons. With that being said, the Administration and I are working closely with the Governors, and this will continue. A decision by me, in conjunction with the Governors and input from others, will be made shortly!

To this tweet, Elura Nanos at Law & Crime responded,

A more meaningless serving of word salad has hardly existed. Here we have a word salad with too much mayo which has been left out overnight from a Fourth of July picnic. This is a Fifth of July salad. It’s not even palatable.

Whatever Trump thinks “opening up the states” actually means, the legal reality is that any such authority does not rest in his itty-bitty hands. Not even a jar opener can help him here. …

… If we’re talking in broad strokes, one arena that always falls clearly within the ambit of state authority are matters of public health and safety. That’s why local cops patrol your local streets and why you report crimes to local law enforcement. It’s why it’s the state board of health inspects restaurants. What’s considered “safe” varies from state to state, and the laws reflect local differences. Individuals can bring challenges to those laws if they appear to violate the guarantees of the United States Constitution – and those challenges are decided by courts. What does not happen is the president stepping in to nullify state safety laws with which he disagrees. In matters of health and safety, the president cannot pull rank – because he simply does not outrank state officials on those matters.

Trump can make all the noises he wants about “opening” the economy. If the governors of enough states say no — especially California and New York — the economy will mostly be closed.

Steve Vladeck, a law professor at the University of Texas in Austin, said on Twitter that “the president has no formal legal authority to categorically override local or state shelter-in-place orders or to reopen schools and small businesses.”

“No statute delegates to him such power; no constitutional provision invests him with such authority,” Vladeck said.

Representative Justin Amash, a former Republican who is now an independent and voted for Trump’s impeachment, said in a tweet that the president is “flat-out wrong.”

“Put down the authoritarianism and read the Constitution,” he said.

A spokesman for Washington Governor Jay Inslee, Mike Faulk, said that “respectfully, the president’s claims are false. The states have the authority when it comes to stay-home orders.”

New York Governor Andrew Cuomo said Trump could probably decide when schools and businesses should re-open but noted that the president has effectively delegated those decisions to governors.

“You want to shift the responsibilities in the relationship?” Cuomo said in a news conference on Monday. “Fine, I’m open to that. Explain to me what they do, what I do. Open what, open it when, open it how?”

Later Monday, six states in the U.S. Northeast, including New York, New Jersey and Pennsylvania, said they would jointly develop a plan to reopen schools and businesses after the outbreak subsides, while California, Washington and Oregon said they would join together on their own framework.

Here’s more about the northeast effort:

Gov. Cuomo joined the governors of the Northeast Corridor: namely, New Jersey, Connecticut, Pennsylvania, Rhode Island and Delaware on Monday to announce a regional effort to reopen the economy in a “coordinated way” amid the coronavirus crisis. …

… Each state will name a public health official, an economic development official and the chief of staff for each governor to a working group that will share information, resources and “intelligence” about an economic path forward.

Since the U.S. has — in effect — no national leadership, it’s going to be up to states to coordinate a safe return to “normal.” What will probably happen is that as soon as Trump announces a re-opening, a bunch of red states will end restrictions and promptly suffer a resurgence of the pandemic — which is beginning to happen in China right now.

At Washington Monthly, Martin Longman points out that people rebelling against the pandemic restrictions as gubmint tramplin’ on thur rahts tend to support dear leader Donald Trump, which suggests submission to authority. So which is it? Are we rebels, or are we sycophants?

In Donald Trump And His Fake Rebels, Longman points to the famous Bundy family, who had an Easter gathering on the ranch in defiance of stay-at-home orders. “Our goal is to get enough people together and secure our rights,” one Bundy said.

It seems like there are a lot of people, all of a sudden, who want to do the “Live Free or Die” thing. But most of them appear to be doing it as part of an effort to reopen the economy or to defend Trump’s initial assurances that COVID-19 is no worse than the seasonal flu. Some are even getting retweeted by the president. …

…The right seems particularly apoplectic about restrictions put in place by Michigan Governor Gretchen Whitmer, perhaps because they want to dirty her up in case she joins Biden’s ticket.

On Twitter, there’s no shortage of incredibly “brave” people who are suddenly born rebels fancying themselves as defenders of liberty. When Hunter S. Thompson wrote his book about the Hells Angels back in the mid-1960s, he said, “The Angels don’t like to be called losers, but they have learned to live with it. ‘Yeah, I guess I am,’ said one. ‘But you’re looking at one loser who’s going to make a hell of a scene on the way out.’”

Right now, that’s a better description of the president and his supporters than the Angels.

You can be opposed to authority and devoted to freedom, or you can be an idiot. 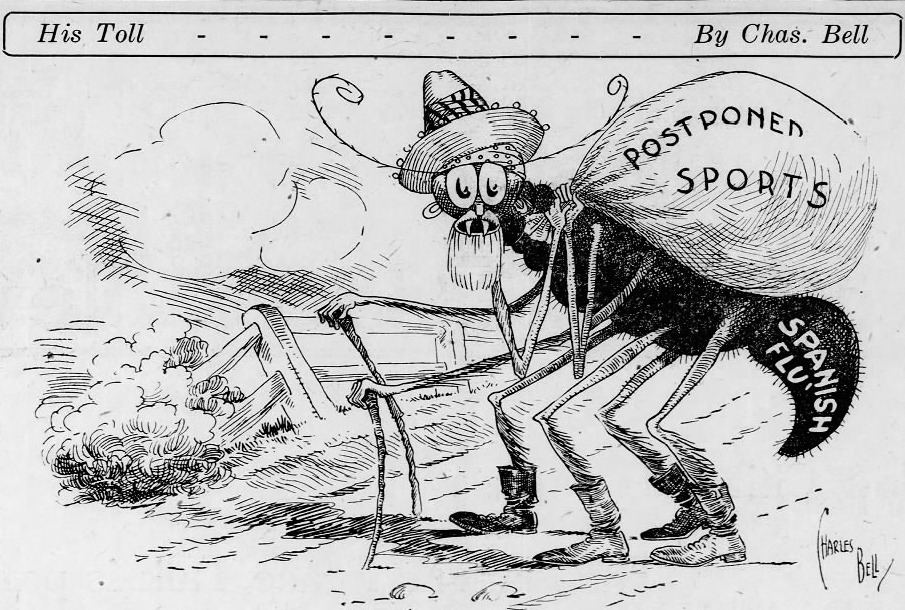 From the Philadelphia Inquirer, October 7, 1918. Philadelphia canceled indoor sports but not outdoor sports, resulting in the deaths of a lot of outdoor-sport athletes. https://phillysoccerpage.net/2020/03/19/philadelphia-soccer-and-the-1918-spanish-flu-epidemic/

10 thoughts on “The Pandemic, the Constitution, and Civil Liberties”