Trump has been talking about a new task force to design a plan to “re-open” America. Fox News announced — yesterday, I believe, that this would be the task force: 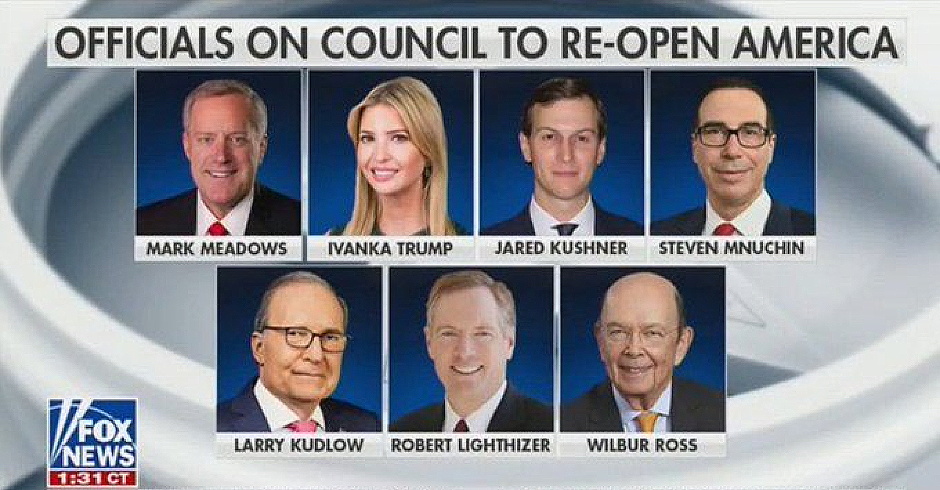 And the Internet ran over with snark and derision. But it turns out that the members of the task force — which Trump had said he would announce today, or maybe this week, or sometime — haven’t been chosen yet. The White House is also still struggling to define precisely what the task force will be called and what exactly it will do.

The details of the committee have already changed several times in recent days, one official told CNN. Who will participate and what they will look to do remains fluid even though Trump said he will formally announce the council Tuesday.

“It’s a mess right now,” someone in close contact with the White House said.

And then there’s this:

Trump did not offer much clarity during Monday’s briefing.

“We’re actually calling it a number of committees with the most prominent people in the country, the most successful people in the various fields, and we’ll be announcing them tomorrow,” Trump said.

“I will call them committees,” he added, “ultimately we’re going to make decisions.”

Yes, just what we need to bring clarity to a chaotic situation — a whole mess of committees. I don’t expect any of these committees to be formed, but talking about them gave Trump, well, something to talk about, so that he can sound like someone in charge.

It’s clear that Trump understands very little about anything, except maybe the basics of grift and fraud. He was born with a ton of money and has gone through life throwing it around and pretending to be in charge. His one great accomplishment is that he made himself into a marketable brand. When the ventures carried out with his money and in his name were successful, he took credit. When they failed, he blamed others. And that’s basically how he’s pretending to run the country.

President Trump’s wild gyrations and reversals on coronavirus become a lot more intelligible when you realize he is motivated at bottom by a simple, unchanging imperative: Trump wants to be perceived as taking charge of the situation, without being held accountable for the horrible consequences of the bad decisions he has made along the way.

If you are the head of a private business with no board of directors to answer to, you can get away with that, I guess. As Sargent points out, though, while Trump claims to “call the shots” he expects the states to fend for themselves without his involvement, which seems contradictory. “As former U.S. Attorney Preet Bharara put it, Trump is basically arguing that ‘my authority is total but my responsibility is zero.'” Nice work if you can get it. Sargent continues,

But in a sense, this isn’t really a contradiction at all, when you view the situation from Trump’s perspective: Both arguments serve precisely the same overarching goal.

When everything is all about maintaining appearances, with no concern whatsoever for underlying substance, this seeming contradiction disappears in a puff of Trumpian chaos pixie dust. Trump asserts “total” authority to be seen as taking charge in some general sense, while refusing to accept responsibility for specific bad outcomes to avoid being seen as at fault for them.

Trump’s entire sorry-ass life, in a nutshell. And he probably has no clue what the difference between appearance and accomplishment even is.

From the very beginning of the coronavirus story, Trump has dragged his feet about doing anything. The one thing he did do that was reasonable — his partial closing of the border to travelers from China on January 31 — he’s been touting as if it were the boldest thing a president has ever done, beating even the Emancipation Proclamation. In his mind it was a heroic decision made in the face of overwhelming opposition from the experts and his political opponents, but his decision has been vindicated, and we should be erecting statues to glorify him already.

The facts of the situation are much more prosaic — career public health officials had recommended restricting travel from China, and only a couple of Democrats criticized it at the time. Eleven freaking days had already passed since the first case of Covid-19 had been diagnosed in the U.S. before travel from China was restricted. And it wasn’t a complete ban; a few thousand people were still able to enter the country from China. It may have made little difference. Greg Sargent, in another post:

As an initial matter, the hyping of this decision is ridiculous. At least 40,000 people traveled from China to the United States in the two months after Trump imposed it. As the New York Times pointed out, it may have “come too late” to meaningfully limit the threat coronavirus from China posed.

But, you know, it’s the one thing he’s done that wasn’t a complete screwup, I suppose. That makes it brilliant.

At the Atlantic, Quinta Jurecic and Benjamin Wittes of Lawfare also look at Trump’s weird aversion to doing his job.

The current crisis brings out Trump’s stark ambivalence toward his own political power. On the one hand, he loves the trappings of dictatorship. He famously envied the way Kim Jong Un’s people ritually revere the North Korean leader, at one point commenting that Kim “speaks, and his people sit up at attention. I want my people to do the same.” Likewise, Trump loves declaring that he has the “absolute right” to do things. Shows of authority clearly float his boat.

But wielding actual authority is hard work for a lazy man. And while crisis response can sometimes have an element of glamour—think of Cuomo’s success in winning over critics with his combination of decisive pandemic response and bomber jackets—the federal government’s role in addressing a plague spread out across 50 states is largely managerial, the life-or-death equivalent of fixing potholes. It involves tasks such as keeping track of supply chains and distributing ventilators and protective equipment.

This is not the kind of work that Trump enjoys. At a March press conference on the coronavirus, he complained, “Governors are supposed to be doing a lot of this work … The federal government is not supposed to be out there buying vast amounts of items and then shipping. You know, we’re not a shipping clerk.”

Even worse, if you wield actual authority, you become accountable for outcomes. The nature of executive power—embedded in the word “executive”—is that it is the power to do things: not to vote or to appropriate money or to deliberate, but to actually do. And if a leader does things, it follows perforce, particularly in an electoral system, that he can be held accountable for the things he did, or didn’t do, or did badly. Trump hates accountability beyond all things. This is the man, after all, who said only a few weeks ago of the federal government’s catastrophic response to the coronavirus, “I don’t take responsibility at all.”

I believe that in Trump’s mind, his daily briefing/reality show is his response to the pandemic. It’s him going through the motions of being in charge, or being what he thinks a leader is supposed to be. He either doesn’t understand there is any more to do, or else he simply can’t bring himself to do it because he might be criticized for it. But neither does he let underlings take initiative; they seem to be frozen in fear of pissing him off. So instead of leadership we have a black hole of emotional neediness sucking all effectiveness out of the executive branch.

It’s telling also that oversight enrages him, either because he’s never in his life had any or because his father, the only boss he’s ever had, was a hardass. And, of course, it’s hard to get away with grift when people are watching. It’s all about the show; nobody is to look behind the curtain.

So Trump will continue to flop around and put on The President Show, and he will do nothing useful, and the states must somehow get through the crisis without federal coordination. His new task force may or may not ever get off the ground. Either way, it won’t make any difference.

6 thoughts on “The Vacuum at the Top”