President Donald Trump and his aides aren’t just weighing coronavirus infection rates as they push for a quick economic restart. They think it’s good politics, too.

Trump aides and allies say they are growing confident that an earlier restart amid the coronavirus pandemic could help the president in his reelection campaign, according to six people close to the White House or Trump campaign.

They point to emerging signs around the country. Trump-supported activists are protesting strict stay-at-home orders. Conservative groups’ internal polling in red-leaning and swing states show a significant uptick in Americans who favor reopening the country. A growing chorus of Republican lawmakers across the nation are on board.

“If you don’t see something start to happen … you’re going to see a conservative revolt by our base,” said Adam Brandon, president of FreedomWorks, a conservative group which recently polled on reopening the economy. “The worst strategy for him is to keep things shut until August. Trump is basically going to win or lose his election right now, in the next month.”

Okay. What could go wrong?

If the consequences weren’t so high, this might be amusing. It’s a bit like watching someone deliberately step on a rake to see what happens. But of course they’re playing fast and loose with people’s lives, so it isn’t funny.

The right-wing media has been playing along, promoting the idea that the isolation measures are a gross overreaction and that the covid-19 pandemic is no more dangerous than past flu vaccines. And, always, the pandemic framework is framed as an “us versus them” issue — Donald Trump versus everybody else.

And as Trump’s incompetence and negligence has hamstrung the U.S. from sensibly returning to economic activity, the message has become let’s just do it, anyway. Trump briefly flirted with the conceit of being a “war leader” against an “unseen enemy,” but now he’s moved on to washing his hands of the whole mess. Being a national leader during a crisis is hard. Let’s just pretend the pandemic isn’t happening, or if it is happening, it’s not that big a deal.

It’s something he’s very experienced at. You have a big, splashy event in front of the cameras announcing that you’ve built the most luxurious hotel or golf course or casino the world has ever seen, and then if it goes bankrupt, you skedaddle out of town, leaving other people holding the bag. So now Trump is preparing to put that experience to work with the coronavirus pandemic and the economic crash it created.

A few days ago Trump was putting on a big “I’m in charge” act; now he’s telling the governors they’re on their own. Yesterday he was lashing out at governors because they were screwing up getting people tested. Apparently the next plan is to force the reopening of the country so that things can go back to the way they were, and if a few geezers in nursing homes don’t make it, blame Democrats.

So now social distancing is quickly becoming unpatriotic in some circles. For example: Rep. Jim Jordan, a guy we all came to know and not love during the impeachment hearings, is calling on the House Judiciary Committee to investigate governors who instituted strict social distancing orders.

Jim Jordan says the House should get back to work and conduct hearings on stay at home orders pic.twitter.com/ukABCU0C65

The events — some, like in Michigan, featuring thousands of attendees — are organized largely by conservative groups calling state-based measures too draconian. Some of the groups have posted links and images on Facebook that downplay the seriousness of the virus. And other leaders have advocated against following CDC guidelines, like a ban on big gatherings and wearing face masks (because wearing them would be “counterproductive.”) Some of the protests have taken on the feel of 2016 Trump campaign rallies, with participants wearing Make America Great Again hats and waving flags emblazoned with the president’s face. …

… The displays are tapping into Trump’s main message on the coronavirus pandemic: governors are to blame for the crisis, not him. As the president ratchets up his reelection efforts, his argument is an effort to simultaneously put the brunt of responsibility for the coronavirus catastrophe on the shoulders of his political opponents while also maintaining that he holds “total authority” over the pandemic and the states facing it.

These people have been assured that the danger of the virus has been overblown; they have no clue what kind of risks they are taking. Will Bunch:

The everyday folks who were out there in Lansing or Columbus this week were largely there to serve the interests of the (mostly) rich and powerful people who used their influence to shoo them out there. Their agendas weren’t always the same. Most notably, President Trump — who promoted the rallies and even the right to carry weapons in an even-stunning-by-Trump-standards series of tweets — desperately wants to shift blame away from his multiple failures on the coronavirus and instead onto public-health-minded governors. Right-wing special interests, like the billionaire family of Education Secretary Betsy DeVos, are terrified that the 22 million unemployed will demand a social welfare state. Fox News is eager to make folks forget its dangerous ignore-the-virus punditry.

But the endgame and the shared interests are very much the same. Distraction, and a diversion of anger in the Heartland — an anger with legitimate and understandable roots — away from them, and hopefully onto the political enemies who threaten their power. If it all sounds painfully familiar, it should. This is the Tea Party Redux, except this time with the added thrill of a seeming death wish among the participants. Maybe we should call this one the Ventilator Party, or maybe the Branch COVID-ians.

Nobody who has any real understanding of either epidemiology or the economy thinks that restarting now is a good idea. Paul Krugman:

The thing is, as far as I can tell epidemiologists are united in the belief that it’s far too soon to be considering any relaxation of social distancing. The lockdowns across America do seem to have flattened the curve, allowing us to — just — avoid completely overwhelming the health care system. New cases may have peaked. But you don’t want to let up until you’re in a position to do so without giving the pandemic a second wave. And we’re nowhere close to that point.

So where is this coming from? I’ve seen some people portray it as a conflict between epidemiologists and economists, but that’s all wrong. Serious economists know what they don’t know — they recognize and respect experts from other disciplines. A survey of economists found almost unanimous support for “tolerating a very large contraction in economic activity until the spread of infections has dropped significantly.”

No, this push to reopen is coming not from economists but from cranks and cronies. That is, it’s coming on one side from people who may describe themselves as economists but whom the professionals consider cranks — people like Navarro or Stephen Moore, who Trump tried unsuccessfully to appoint to the Federal Reserve Board. And on the other, it’s coming from business types with close ties to Trump who suffer from billionaire’s disease — the tendency to assume that just because you’re rich you’re also smarter than anyone else, even in areas like epidemiology (or, dare I say it, macroeconomics) that require a great deal of technical expertise.

I could go on about the non-meritocracy we’re living in that allows cranks and idiots to be in charge, but I’ll save that for another time.

We’ve already seen that some nations that have been doing much better than us experienced a “second wave” of virus as they relaxed restrictions. We may have peaked in some places, but we’re possibly weeks away from peaking in other places, especially as the Trumpie protesters take their newly virus-loaded selves back to their neighborhoods.

This is not going to end well. 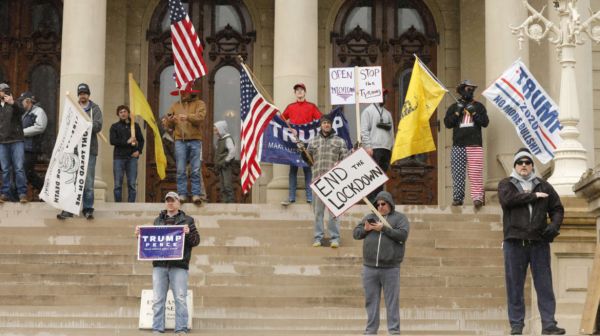