As expected, some time in the early morning today someone became the 70,000th American to die of covid 19, officially. The real number of deaths is considerably higher, experts tell us, possibly by tens of thousands.

And, of course, those aren’t just numbers. Those are people. They are mourned. They mattered.

The virus is spreading rapidly into less populated areas. From Axios, yesterday:

The big picture: The hardest-hit areas so far have mostly been in states with Democratic governors. But the number of coronavirus cases is now increasing more quickly in states with Republican governors.

By the numbers: Coronavirus cases and deaths are both higher in Democratic states than in Republican ones, even after adjusting for population.

However, over the last two weeks, reported infections have increased 91% in red states versus 63% in blue states. 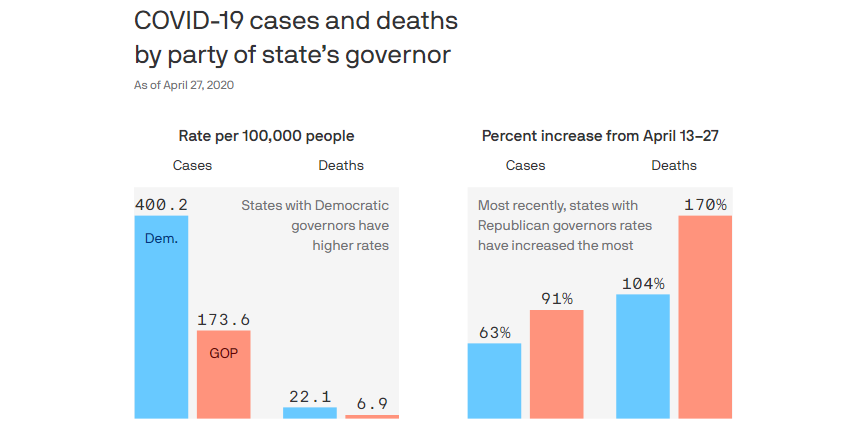 President Donald Trump says it would be unfair to Republicans if Congress passes coronavirus “bailouts” for states because he said the states that would benefit from that funding are run by Democrats.

It’s not like there are Americans living in those states or anything.

“I think Congress is inclined to do a lot of things but I don’t think they’re inclined to do bailouts. A bailout is different than, you know, reimbursing for the plague,” Trump told the New York Post in a sit-down interview in the Oval Office on Monday.

States in general are not exactly rolling in money, and nearly all of them have some kind of balanced budget requirement. That means that as state and local funds are diverted to pandemic response there will be less money for things like police, firefighters, teachers, sanitation workers. Any state — red, blue, or purple — that gets slammed by the pandemic is going to need help from the federal government. And since the red states tend to be poorer, in effect many of them have been getting federal “bailout” money for years. Courtesy of blue state taxpayers.

Trump is going all-out to persuade us all to give up on the social distancing and go back to work. He is clearly willing to trade lives for the economy. My sense of things is that a lot of Americans have been lulled into believing the worst is over. But it’s possible we haven’t seen the worst yet. Trump is betting all of our futures on what a virus might do.

The plan is to have no plan, to let daily deaths between one and three thousand become a normal thing, and then to create massive confusion about who is responsible— by telling the governors they’re in charge without doing what only the federal government can do, by fighting with the press when it shows up to be briefed, by fixing blame for the virus on China or some other foreign element, and by “flooding the zone with shit,” Steve Bannon’s phrase for overwhelming the system with disinformation, distraction, and denial, which boosts what economists call “search costs” for reliable intelligence.

Stated another way, the plan is to default on public problem solving, and then prevent the public from understanding the consequences of that default. To succeed this will require one of the biggest propaganda and freedom of information fights in U.S. history, the execution of which will, I think, consume the president’s re-election campaign. So much has already been made public that the standard script for a White House cover up (worse than the crime…) won’t apply. Instead, everything will ride on the manufacture of confusion. The press won’t be able to “expose” the plot because it will all happen in stark daylight. The facts will be known, and simultaneously they will be inconceivable.

Will Trump get away with this? Among some Americans, certainly. But what percentage? I’d like to think it won’t be a high enough percentage to save him, especially as the virus spreads and touches more and more families.

“I think they’re starting to feel good now. The country’s opening again. We saved millions of lives, I think.”

That’s what President Trump told the New York Post in an interview Monday. And while he may be partially wrong on the second point and spectacularly wrong on the third, I’d suggest that he really does believe Americans are feeling good, if you define “good” as “ready to stop worrying about the coronavirus pandemic and get back to normal activity.”

But he’s wrong about that, too. Trump has a fundamental misunderstanding about what Americans are thinking and feeling right now, a misunderstanding that has not only guided his decision-making throughout this crisis but helped cost the lives of untold thousands of Americans.

Waldman goes on to cite polls showing that large majorities of Americans are still worried they and loved ones will be infected. Large majorities say they would feel uncomfortable shopping in most retail stores and eating in sit-down restaurants right now.

When Texas partially lifted its lockdown order, people went to parks and beaches but stayed away from malls and stores. “There’s absolutely no one coming around here,” said an employee of a clothing store at a mall in Austin.

And that’s what economists have been saying all along; you really can’t “open” the economy while people are still — very justifiably — afraid of catching a sometimes fatal disease. It never was an either-or — death or GDP? — until Trump made it one with his own incompetence.

Some are saying Trump is unraveling; I question whether he is any more “unraveled” than he ever was. He is a seriously warped individual who assumes most people are as warped, as selfish, as narcissistic, as he is. For example, George W. Bush’s “Call to Unite” video, which is about as inoffensive as anything Dubya ever did, made Trump go ballistic.

I mean, this is the kind of thing people usually say at times like these. A psychologically normal person would, at the very least, say something about it like isn’t that nice? But not our Trump.

.@PeteHegseth “Oh bye the way, I appreciate the message from former President Bush, but where was he during Impeachment calling for putting partisanship aside.” @foxandfriends He was nowhere to be found in speaking up against the greatest Hoax in American history!

Everything is about him, and nothing about him is normal. Were it not for the fact that the Republican party has been taken over by zombies Trump would have been bounced out of office months ago.

It’s also the case that “uniting” isn’t something that Trump grasps, in spite of his claims to be a “uniter.” For that matter, George W. Bush wasn’t very good at it, either, in spite of the gushing sentiments in the video. But at least Dubya appreciated that “uniting” is something the American people are supposed to do in times of crisis, and so we must pay lip service to it. Trump’s idea of “uniting” is that everyone is supposed to to adore him.

Vice President Pence just announced that the coronavirus task force itself will soon be disbanded. I guess if the Trump Show is cancelled, there’s no point keeping the cast around. This may be a signal that we’re about to declare the pandemic over. Maybe Trump will sign an executive order to end it.

And one of Trump’s discarded officials, an FDA commissioner named Scott Gottlieb, said on Face the Nation Sunday that we could have 100,000 deaths by the end of June. No, dude, at the rate we’re going, we’ll have 100,000 dead before the end of May. Easily. I wish these people would keep up with the numbers.

6 thoughts on “Keeping Up With the Numbers”