I haven’t written here about Mark and Patricia McCloskey, the gun-totin’ St. Louis couple of wackadoos who became living memes a few days ago. You must have heard about them. 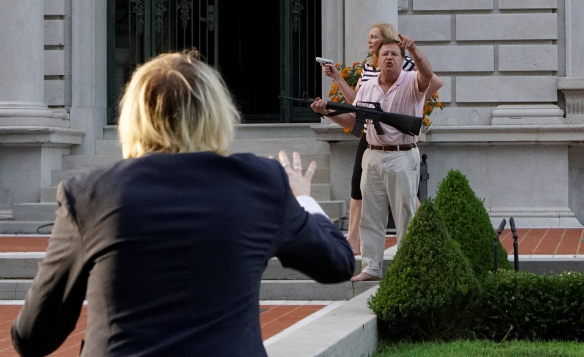 No, I don’t know who the person is in the foreground. And why are the McCloskeys both barefoot? Oh, never mind. There are some new developments to discuss, in particular about whether the McCloskeys might face charges.

The basic facts of what happened on June 28 are much disputed, of course, but what can be verified is that a number of Black Lives Matter protesters entered the gated neighborhood in which the McCloskeys live in ostentatious splendor and walked through the streets of that neighborhood on their way to the home of Mayor Lyda Krewson — a Democrat — for reasons explained here.

About the gate: There have been claims that the protesters tore down a gate to get into the community, but that’s been disputed in St. Louis media. Here is a report from KSDK News, the NBC television affiliate in St. Louis, broadcast on June 29, the day after the incident. It goes into details over the disputed stories about the gate. As you can see in the report, the gate was still there. It was damaged, but it’s disputed whether the damage already existed before the protesters went through the gate. It is an old gate, and the protesters said someone had opened the gate for them.

On the other hand, Mark McCloskey produced a photo showing much more serious damage to the gate than is seen in the television news video shot the next day, and don’t ask me how he managed that. Even now people are arguing on social media about the gate, and some people are claiming the gate was replaced, but there’s been nothing about that in St. Louis media. It’s an antique gate, and I doubt you could just run down to Home Depot for an identical replacement.

About the “private” neighorhood: The McCloskeys are not the sole owners of the property behind the gate. The street and sidewalks belong to a homeowners association, so while the streets are not “public,” they aren’t the McCloskeys’s property. And as we’ll see, this could be a critical distinction if the McCloskeys find themselves facing criminal charges.

Indeed, the McCloskeys and the homeowners association have been engaged in a drawn-out legal dispute about who owns what:

A judge on Monday ruled against motions from both sides to end the case without a trial. Details about the legal case were first reported Thursday by the St. Louis Post-Dispatch.

Mark McCloskey said in the affidavit that he and his wife purchased the home in 1988 and have taken several measures to improve the disputed piece of land.

The affidavit states they have “regularly prohibited all persons, including Portland Place residents, from crossing the Parcel including at least at one point, challenging a resident at gunpoint who refused to heed the McCloskeys’ warnings to stay off such property.”

Watkins said in an interview that the McCloskeys have “touched their weapons” just twice in their 32 years on Portland Place — during the incident in 1988 or 1989 cited in the affidavit, and on Sunday.

In other words, they pulled a gun on one of their own neighbors for being on a piece of land that they don’t clearly have title to, but claim anyway.

In the earlier incident, Watkins said, Patricia McCloskey heard a noise at night and saw someone.

“She looked down, had a gun and screamed for the person to stay off her property,” Watkins said. It turned out to be a neighbor cutting through on the way home from a nearby business district. Watkins said the neighbor was then, and is now, a friend of the couple.

One suspects the McCloskeys have boundary issues, and I’m not talking about real estate. But there are other people living in that community who didn’t see the protesters as a threat, and they produced an open letter criticizing the McCloskeys a few days ago:

A group of more than three dozen people who live in the private neighborhood where a couple brandished guns at protesters Sunday night released an open letter Wednesday condemning the couple. …

… One of the neighbors who signed the letter confirmed Thursday that the letter was authentic.

“Some of us choose to speak up following the horrific event that transpired on Sunday evening near our homes. As the undersigned, we condemn the behavior of anyone who uses threats of violence, especially through the brandishing of firearms, to disrupt peaceful protest, whether it be in this neighborhood or anywhere in the United States,” the letter reads.

Shortly after the incident, the St. Louis prosecutor announced she is looking into bringing charges against the McCloskeys. St. Louis news programs have interviewed one local legal expert after another saying that under Missouri’s nutjob gun laws it’s unlikely the McCloskeys broke the law. But today Erika Wurst, a deputy district defender at the St. Louis city Public Defender’s Office, wrote an op ed in the St. Louis Post-Dispatch disputing that opinion.

Undoubtedly, the law here is complicated. But Anders Walker, a St. Louis University professor quoted in the article, got it dangerously wrong. Homeowners cannot “pull the trigger” to get someone “off their lawn.” The Castle Doctrine modifies Missouri’s self-defense statute, Section 563.031. In order for someone to use deadly force on their property, the trespasser must be threatening a person with unlawful force. Mere trespass never justifies the use of deadly force. Such a blatantly incorrect misstatement of the law will certainly not lead to justice.

Without question, the state could make a case against at least Patricia McCloskey for unlawful use of a weapon. State law makes it illegal to knowingly exhibit or aim “any weapon readily capable of lethal use in an angry or threatening manner” at someone. Maybe she has a defense, but I’m tempted to say what prosecutors always tell me when my clients have a good defense: Let a jury decide.

There’s an article at Business Insider by Patrick Blanchfield, an Associate Faculty Member at the Brooklyn Institute for Social Research, providing some more background on the issue.

Parsing what happened in terms of the law gets murky fast. As US states go, Missouri is quite liberal in terms of gun rights. The open carry of firearms is legal. Missouri is also a Castle Doctrine state, allowing home owners to make armed self-defense of their residences against invaders. The state does not impose a “Duty to Retreat,” meaning gun owners can shoot and aren’t required to flee from their home or elsewhere if they feel their lives are under imminent threat (sometimes known as Stand Your Ground).

But brandishing a weapon at someone in a threatening manner can be a felony, and the Castle Doctrine does not straightforwardly extend to “private streets.” Indeed, St. Louis city laws regarding brandishing at people in shared public spaces (in the more common language sense) may well trump the prerogatives of private citizens in private or semi-public ones. And it is certainly the case that someone’s performing an act of civil disobedience — including trespassing — does not itself grant bystanders the right to threaten lethal force against them.  …

… Likewise, it is striking how, in the many defenses of the McCloskeys, the question of what, exactly, “private property” means is slippery. Is it their private property? Is it the private property of Portland Place Homeowner’s Association, of which they are members? Or is it the idea of a particular order of private property, which first and foremost depended on the prerogative of armed white people, civilians and otherwise, to claim territory and dominate people, above all unruly nonwhite people, within it?

As far as I know, the Portland Place Homeowner’s Association has not officially taken a position on this matter, although given the number of signatures on the open letter, if it went to a vote of the members about whether the protesters were a threat, the McCloskeys might lose.

Anyway, it’s not impossible that the McCloskeys will face charges eventually. Whether they would be convicted by a St. Louis jury is another matter entirely.

While we’re on the subject of the McCloskeys — I’ve seen claims in social media that they are registered Democrats. There is no registration by party in Missouri. I verified that by looking at my own voter registration card. There are also claims that the McCloskeys donate money to Democrats. Snopes says that records going back a few years show that they’ve donated money to politicians of both parties, but in recent years most of their donations have gone to Republicans.

There are also some stories in the news that protesters either returned to the McCloskey property or were very near there Friday evening, July 3. Nothing happened, fortunately. If the St. Louis prosecutor is going to bring charges — and I believe she will if there’s any case at all — it would probably be better for protesters to stay away from the McCloskeys rather than potentially muddy the water if somebody did something stupid. And the McCloskeys are dangerous. They haven’t shot anybody yet, but give ’em time.

5 thoughts on “The McCloskey Saga, Updated”