There’s a lot of good commentary on the Trump campaign today, much of it with a similar theme — Trump is running on empty.

Quinta Jurecic and Benjamin Wittes, The Atlantic, Trump Is Campaigning on a Platform of Abject Failure

In a series of speeches over the past several days, the president has spelled out, or at least gestured toward, the major themes of his coming campaign. There will be other themes, to be sure—mostly, one presumes, attacks on Joe Biden—but the president’s recent speeches in Tulsa, in Phoenix, and at Mount Rushmore all outline what appear to be the main components of his affirmative case for a second term.

Trump’s arguments for himself are threefold, Jurecic and Wittes write. First, he claims to have built a great economy (as opposed to coasting on the economy left him by Barack Obama, which is closer to the truth) before the pandemic hit. He is the guy you want to make the economy great again, as opposed to Biden, who is going to raise your taxes. How persuasive this argument will be if the economy doesn’t get significantly better before November is anybody’s guess, but I’m doubtful it’s going to work.

Second, he’s boasting he did a great job keeping the pandemic under control, while at the same time claiming it isn’t that bad and will just go away. “As The Washington Post reports, he has suggested 19 times since February that the virus might just “go away”—most recently on July 1,” Jurecic and Wittes write. Trump is at the mercy of the virus.

And third — culture war. Confederate monuments, law and order, scary immigrants, more racist dog-whislting than we’ve seen since the 1960s. At the same time, there will be much demonizing of the “left-wing mob” trying to destroy everything good and pure and white in America.

Let’s take these three items in reverse order, starting with culture wars. Jamelle Bouie writes at the New York Times that if the election were held today, Trump would almost certainly lose in a landslide. He’s got four months to turn his fortunes around. Can he do it?

With enough racist demagogy, Trump seems to think, he’ll close the gap with Biden and eke out another win in the Electoral College. But it is one thing to run a backlash campaign, as Trump did four years ago, in a growing economy in which most people aren’t acutely worried about their lives and futures. In that environment, where material needs are mostly met, voters can afford to either look past racial animus or embrace it as a kind of luxury political good. When conditions are on the decline, however, they want actual solutions, and the politics of resentment are, by themselves, a much harder sell.

Bouie goes on to provide some examples from history to argue that racist campaigns work better in good times than bad, concluding —

… if it takes a decent economy to make voters conducive to the campaign Trump wants to run — then he is, at this moment, speeding down an electoral dead-end. As long as Covid-19 is out of control, as long as there is mass suffering, sickness and economic distress, then nothing short of actually doing his job will help him get ahead. There simply is no substitute for good governance.

And good governance isn’t something Trump can do. He couldn’t do it if he tried. He has no clue what “governance” even is. See also Shane Savitsky at Axios, Trump’s failing culture wars, and Zeeshan Aleem at Vox, Trump is going all in on divisive culture wars. That might not work this time.

I’m seeing some Trump ads on St. Louis television stations that are about what’s going to happen when you call the police and have to deal with an automated telephone tree with a five-day response time. But whatever you think of defunding the police, that’s a state and local matter. I’ve also seen internet ads playing up the alleged corruption of the Obama-Biden administration, although exactly what that corruption was supposed to be is not explained.

The Trump campaign is painting Joe Biden as too weak and feeble to deal with all the chaos the “left-wing mob” is bringing. However, at the same time, the Trumpies are trying to hang the anarchists and Antifa! and all the dark boogeymen in their dark minds around the neck of Biden, as if he were in cahoots with them, and I don’t think they can have it both ways.

Anyway, I agree with the view that most voters whose lives have been upended by the pandemic and the economic disruptions caused by the pandemic don’t want to hear about Confederate statues. They want to know what you’re going to do to put their lives back together.

About the pandemic — Greg Sargent writes that it is just now dawning on Republicans that maybe they’ve made some bad decisions.

For many weeks, the basic story that President Trump told the country — and himself — went like this: The only thing restraining us from roaring back to greatness is the oppressive restrictiveness of overzealous officials, mostly Democratic governors and pointy-headed health experts.

In this narrative, by tweeting things such as “LIBERATE MICHIGAN,” Trump aligned himself with the proposition that once lockdowns were lifted, Americans chafing to resume normal activity would instantly do so by the millions, unleashing a miraculous “V-shaped recovery.”

Yet privately, Trump’s own allies are suddenly making a major admission that completely overturns this narrative. Instead, they are acknowledging a core truth about this whole crisis — one that has already landed his reelection effort in deep trouble. …

… Trump’s allies are admitting what numerous experts have said for months: That in order to seriously get back on track to economic recovery, we have to tame the virus first. And they’re admitting that this is a key reason he’s in trouble.

So Republican politicians are swallowing hard and saying, um, yeah, maybe we ought to be wearing masks. Maybe we should have maintained isolation longer, instead of pushing to open the economy back up so fast.

Just as an example of how the ground has shifted, today Texas governor Greg “what pandemic?” Abbott blasted local leaders for not taking the pandemic seriously enough and enforcing restrictions, including mask orders.

There is also serious talk about whether down-ballot Republicans should cut their ties with Trump to salvage their own elections. They aren’t going to do it next week, but if we get to the first of September or so without visible progress on either the economy or the pandemic, some may feel forced to make that choice.

Trump’s failing campaign is threatening Republican control of the Senate. Nevertheless, when asked whether the president has exhibited failed leadership in response to the coronavirus, Senator Joni Ernst defended him saying, “I think that the president is stepping forward.”

Apparently that response helped her opponent, Theresa Greenfield, raise over $100,000. It’s worth noting that the most recent Des Moines Register poll showed Greenfield leading Ernst by three points. In a state Trump won by nine points in 2016, that same poll had Biden ahead by one point.

The Senate race in Iowa demonstrates the dilemma facing Republicans all over the country—even in traditionally red states: Do they stick with the president and go down with him, or do they hold him accountable and risk losing the support of the GOP base, which remains loyal to Trump. At this point, they’re obviously picking the former. But according to Gabriel Sherman, they’ve adopted a deadline on that.

A Republican strategist told Gabriel Sherman that “Republicans have Labor Day penciled in as the deadline for Trump to have turned things around. After that, he’s on his own.” LeTourneau expresses the opinion that Republicans are deluded if they think Trump is going to start doing anything differently from what he’s doing now, which isn’t working.

Regarding the economy, bringing that back will depend a lot on the virus and a lot on Congress. The headlines today are full of the names of all the companies and organizations that got PPP loans instead of your cousin whose restaurant business is going under. Even so, Congress needs to get another stimulus package out, soon. Mitch McConnell opened the door a crack yesterday that maybe something would be considered, which suggests what’s left of his hair isn’t in fire yet. It ought to be.

The only thing I can say for sure is that Trump is not going to pivot away from his campaign decisions. It’s going to be GLOOM DOOM CULTURE WAR, what pandemic?, and trust me on the economy from now until the election. 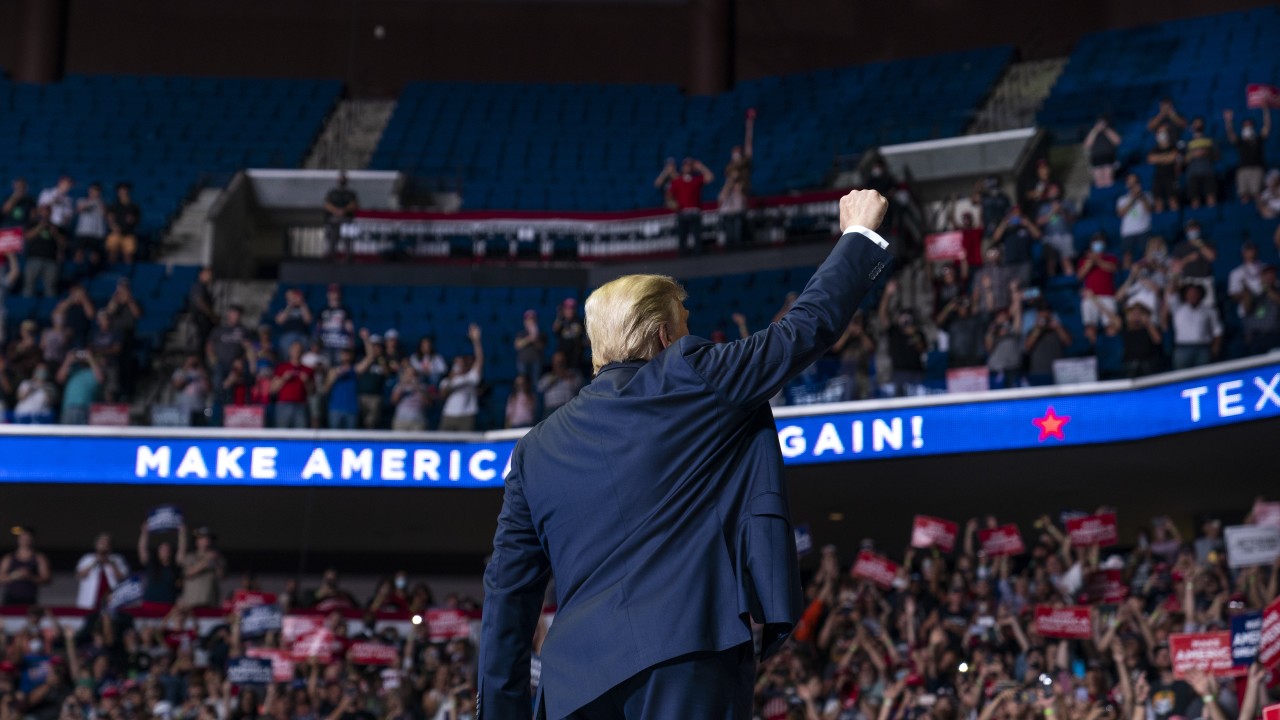 10 thoughts on “Trump: Running on Empty”