The pandemic is raging out of control, especially in the Midwest and western Mountain states. Will this impact in-person voting on election day?

I’m not the only one wondering. Ed Kilgore writes about the surge in early voting by Democrats and wonders if Republican voting suppression efforts are backfiring.

Yes, the surge could mean massive overall turnout — or it could simply reflect fears of health risks for in-person voting on Election Day, or unusually early mail-in or in-person voting based on concerns about postal delivery or long lines. And the Democratic skew could mean a big sweep, or simply the partisanship in voting methods resulting from the president’s endless and false attacks on voting by mail….

…My colleague Eric Levitz recently speculated that Trump’s devious tactics might backfire if ongoing spikes in COVID-19 cases keep Republicans the president has convinced to vote in person instead of voting by mail to stay home on November 3. So it’s possible the GOP effort to shape an electorate in its own image could backfire twice, by scaring away Republicans and turbocharging angry Democrats. What goes around comes around, for sure.

Suppression tactics such as Texas Gov. Greg Abbott’s limiting drop-off boxes to one per county and shenanigans with the mail have inspired Democrats to get their votes in as early as possible, by mail and by early in-person voting. See ‘Warning flare’: New swing-state data shows massive Democratic early-vote lead at Politico. Trump voters appear to be planning to vote on election day — just in time for peak covid.

There has also been a pattern of covid spikes following in the wake of Trump rallies. Way to go, Trumpers.

The report, published Thursday by the Center for Strategic and International Studies, found that white supremacist groups were responsible for 41 of 61 “terrorist plots and attacks” in the first eight months of this year, or 67 percent.

The finding comes about two weeks after an annual assessment by the Department of Homeland Security warned that violent white supremacy was the “most persistent and lethal threat in the homeland” and that white supremacists were the most deadly among domestic terrorists in recent years.

The report also warned that violence could rise after the election.

Also elsewhere, Jared and Ivanka are upset about these billboards in Times Square. 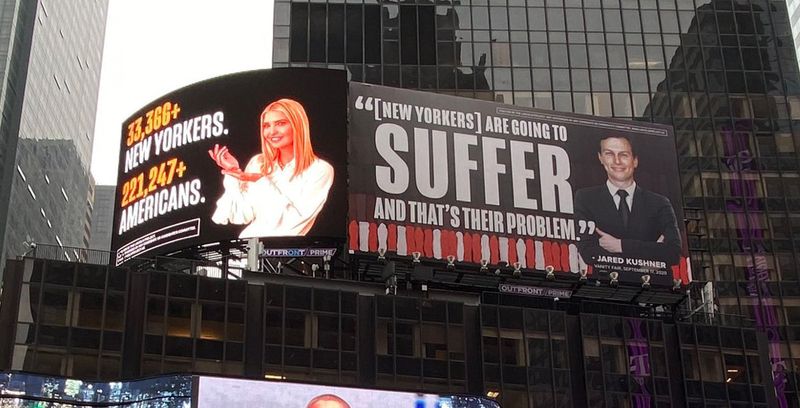 Jared and Ivanka are suing the Lincoln Project, who paid for the billboards. The quote attributed to Jared is from this Vanity Fair article that said Kushner, in charge of acquiring PPE and other supplies and getting them to where supplies were needed, made the political decision to let the states manage on their own. Blue states, and especially New York City, were being hit hard at the time.

“Free markets will solve this,” Kushner said dismissively. “That is not the role of government.”

The same attendee explained that although he believed in open markets, he feared that the system was breaking. As evidence, he pointed to a CNN report about New York governor Andrew Cuomo and his desperate call for supplies.

According to another attendee, Kushner then began to rail against the governor: “Cuomo didn’t pound the phones hard enough to get PPE for his state…. His people are going to suffer and that’s their problem.”

7 thoughts on “Early Voting News and Other Stuff”