A few weeks ago I wrote about the county mask mandate where I live now and the many people who turned out to protest it. The police had declared they would not enforce the mandate. Even so, I started seeing a lot more people wearing masks, so I thought we’d made some progress. But maybe not.

Amber Elliott took over as director of the St. Francois County public health department in January, excited to take the position after serving five years as assistant director and a communicable disease nurse for the department.

Elliott was looking forward to tackling issues such as opioid addiction, lead poisoning and childhood trauma with her staff of nearly two dozen employees.

She did not expect that within a few months her small health department about an hour south of St. Louis would be overwhelmed with fighting a pandemic. But what has been even more surprising are the threats and harassment she and her family have faced as she works to protect her community.

“There’s been many over the course of eight months, to personal attacks on Facebook calling me every name in the book, to calling me and cussing me and saying I’m stupid and I’m incompetent and I don’t know what I’m doing, of course the pandemic is fake, and all those type of things,” Elliott said.

People told her they were following her, that they were watching her. They took pictures of her, her husband and her two elementary school-age children in public and posted them online with remarks she doesn’t want to repeat.

Citing the need to protect her children and after receiving another promising job offer as a nurse, Elliott resigned last week as director. Her last day will be Nov. 20.

It turns out that Elliott is the 12th local health director to resign in Missouri since the pandemic hit, according to Kelley Vollmar, chair of the Missouri Association of Local Public Health Agencies. Vollmar also has been threatened.

Vollmar said she has experienced harassment being a director as well. As a domestic violence survivor, she had worked to keep the location of her home private, but people searched her tax records, divorce records, committees she’s served on and posted information online to determine where she lived, she said. …

… A gun shop owner in the county uses his Facebook page to attack her credibility, warning that gun owners will “decide they’ve had enough of the lies.” Someone, she said, called her husband saying she was out with another man. People posted pictures of her on social media, altered to make her look like Adolf Hitler or comparing the health department to Nazis.

I’m assuming most of these thugs are Trump supporters. So our real-world brownshirts who support the fascist dictator wannabe Trump ridicule a health director by comparing her to a Nazi. Work that one out. Not exactly geniuses, these folks.

The Post-Dispatch article goes on to discuss health directors and other officials around the country who have been threatened and harassed for doing their jobs and trying to keep people safe. These thugs live among us, and they aren’t going to evaporate if Donald Trump loses the election.

Yesterday the U.S. reported a world record of more than 100,000 COVID-19 cases in single day. We’re Number One!

St. Francois County is currently averaging 65 new cases of covid per 100,000 residents per day. Most of the people I know here are over 65, and a lot of them have been pretty much housebound since last spring to stay safe from the pandemic. And the county mask mandate has expired and will not be renewed.

If we can get through the next few days without widespread violence related to the election, we’re going to be extremely lucky.

“Militia groups and other armed nonstate actors pose a serious threat to the safety and security of American voters,” said the Armed Conflict Location & Event Data Project, a nonprofit organization that researches political violence and has tracked more than 80 extremist groups in recent months. The project’s report said Georgia, Michigan, Pennsylvania, Wisconsin and Oregon “are at highest risk of increased militia activity in the election and post-election period.”

Unfounded rumors spreading in right-wing circles on Facebook and throughout conservative media have fixated for weeks on the notion that civil war is nigh. The longtime radio and TV commentator Glenn Beck has plied his millions of followers with the idea that the left has an Election Day “playbook” for civil strife.

“The Left” has no such “playbook.” This is not to say that no U.S. leftie ever committed an act of violence, but the Left right now just wants people to vote and for the votes to be counted. It’s the Right that is much more likely to disrupt the election. See, for example, Self-Proclaimed ‘Proud Boy’ Arrested for Threatening to Blow Up North Dakota Polling Place: Police.

In Michigan, two right-wing operatives were charged with voter intimidation after robocalls that falsely warned that the names of mail-in voters would be placed in a public database used for arrest warrants and debt collection.

I’m not sure what’s to be done with this situation. It’s going to be with us for a long, long time.

… But when the Biden campaign bus drove to Austin, it was greeted by a blockade of pro-Trump demonstrators, leading to what one Texas House representative described as an escalation “well beyond safe limits.”…

… Historian Dr. Eric Cervini was driving to help with the Biden campaign stop when he filmed a line of pickup trucks along the highway, many of them flying Trump flags. The drivers were “waiting to ambush the Biden/Harris campaign bus as it traveled from San Antonio to Austin,” Cervini tweeted.

“These Trump supporters, many of whom were armed, surrounded the bus on the interstate and attempted to drive it off the road,” he alleged. “They outnumbered police 50-1, and they ended up hitting a staffer’s car.” …

… Footage from a CBS affiliate in Austin shows Trump supporters with signs and bullhorns surrounding the bus when it parked, with one person screaming that Biden was a communist.

This is a traffic violation and attempted homicide. Why hasn’t anyone been arrested? pic.twitter.com/QnfF4vXMQn 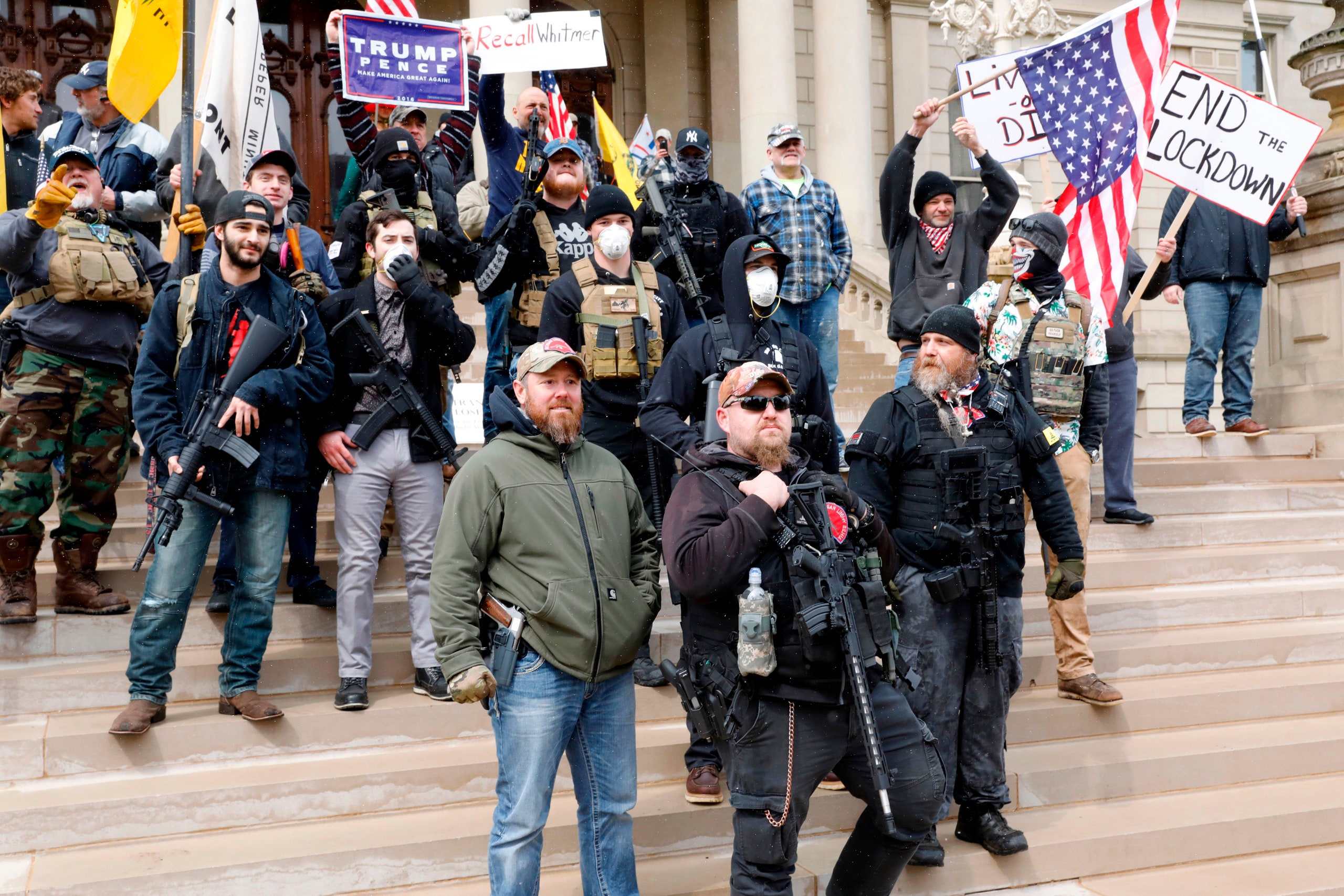 Armed protesters against pandemic safety measures rally at the state capitol in Lansing, Michigan on April 15, 2020.

6 thoughts on “The Enemy Among Us”