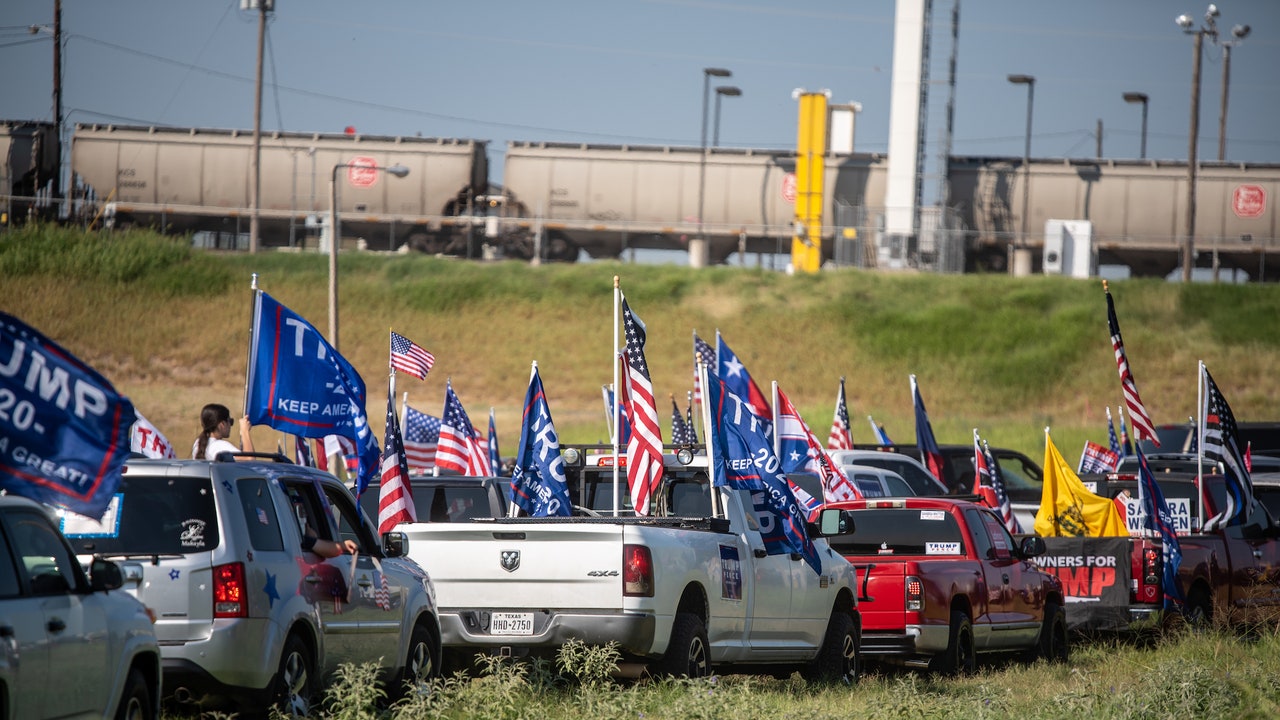 The recent phenomenon of swarms of cars and trucks flying Trump banners deserves comment, especially after hearing more stories about how these meatheads are threatening mayhem and blocking roads. It also makes me wonder how such bullying demonstrations of force are supposed to persuade anyone to vote for Trump. I like words; I like to hear about policy and values and such from my candidates. Force alone doesn’t appeal to me.

But then, I’m not a Trump supporter, am I?

Something I wrote last year about Trump supporters:

[M]any of our great social observers and philosophers — Erich Fromm, Eric Hoffer, Hannah Arendt — have long noted that alienated and insecure people easily surrender their own ego-identities and autonomy to mass movements and authoritarian strongmen. People march blindly into mass movements because the group provides something the individual feels is lacking in himself. Trump, to his fans, is a larger-than-life being of great power and certitude. By surrendering their autonomy to him, they feel that they absorb that power. Through Trump, they find connection, strength and a sense of belonging. The baffling, ambiguous world becomes a place of absolute clarity, with bright lines between good and bad, right and wrong, truth and lies, all as defined for them by Trump.

Something I wrote nearly four years ago, shortly after the 2016 election:

But the other thing we need to keep in mind is that people are drawn into authoritarianism by feelings of alienation and helplessness. The psychologist/philosopher Erich Fromm, who escaped Nazi Germany, saw this first hand:

“We have seen, then, that certain socioeconomic changes, notably the decline of the middle class and the rising power of monopolistic capital, had a deep psychological effect… Nazism resurrected the lower middle class psychologically while participating in the destruction of its old socioeconomic position. It mobilized its emotional energies to become an important force in the struggle for the economic and political aims of German imperialism.”

…“It was the irrational doubt which springs from the isolation and powerlessness of an individual whose attitude toward the world is one of anxiety and hatred. This irrational doubt can never be cured by rational answers; it can only disappear if the individual becomes an integral part of a meaningful world.”

We all have a deep need for a sense of connection to others and belonging to whatever society we are planted in, Fromm said. People who are jerked around and treated as disposable cogs for too long are likely to lose that sense of connection or belonging. And then they are likely to give themselves to an authoritarian dictator, because through him they think they will find power. That’s really what Trump was promising — stick with me, and you’ll share in my power. The system won’t kick you around any more.

The system kicks nearly all of us around these days; even most white people. Possibly the biggest difference between whites who flock to Trump and those who don’t is that those who don’t have the education and intellectual capacity to see the bigger picture and have some idea how the system is turning us all into serfs. All but that tiny minority at the very top, of course.

At The Atlantic, law professor Gregory Hill writes about how vehicular mayhem is becoming the preferred form of violence by the U.S. Right.

In a 102-day period following George Floyd’s death in the custody of Minneapolis police, the terrorism researcher Ari Weil identified 104 vehicle-ramming attacks that had been committed against protesters. In the overwhelming majority of cases, the perpetrators were extremists on the far right whose acts of violence were cheered online. Police officers have also driven their vehicles—in some cases SUVs or cruisers fitted with bull bars—into protesters around the country. A few attacks have allegedly been perpetrated by left-wing extremists, too. The preeminent site of violent political conflict this year has been the street, and cars have joined firearms as weapons of choice.

Unlike people who commit gun violence, drivers who hit people benefit from a certain ambiguity: Did the driver mean to run over those protesters—or just not see them? Was the driver acting out of fear? Why were the protesters in the street in the first place?  In the United States, drivers may face little accountability even for fatal crashes. Even in deep-blue New York City, one study found that more than 93 percent of hit-and-run drivers who killed their victims were not charged with any type of homicide; far more often, the incident isn’t fully investigated, the driver simply can’t be identified, or authorities treat the crash as a traffic infraction and issue a traffic ticket or file no charges at all.

Being in a truck or car also provides an illusion of anonymity. One is surrounded by metal, and behind windows, and how often do we notice normally nice people becoming complete assholes when behind a wheel?

Why does driving turn so many of us into asshats? It’s not merely the rage aspect. We’re constantly doing socially inappropriate things when we’re inside our mobile bubbles. We cut in line, steal parking spots, fail to use our turn signals, and move ahead at a stop sign when it’s not our turn. We engage in aggressive and risky maneuvers that put our lives—and those around us—at risk.

This happens in part because cars exist in a social netherworld somewhere between public and private space. “When we’re in the car we often feel anonymous,” said Erica Slotter, a social psychologist at Villanova University. “That feeling of anonymity can sometimes mean that we behave in ways that we wouldn’t otherwise because we’re less likely to be held accountable.”

So, the “Trump trains” of trucks and cars make logical sense. These are people surrendering their individuality to Lord-God Trump, and being in vehicles make that surrender even more tangible.

I will probably come back and post something later tonight when we’ve got a few results. Don’t forget that it’s likely the early results will favor Trump; the blue shift is likely to come later. Stay safe, and keep breathing.

12 thoughts on “Why There Are Trump Trains”