“Democrats are going to have to choose really soon: do they roll over for phony calls for unity that absolve the Republican Party for its trespasses against American democracy? Or, do they wield the rare power they have won through democratic means to repair democracy and people’s lives?” Well, you know where I come down on that.

At the center of the issue is one Mitch McConnell, who is refusing to negotiate in good faith on an organizing resolution that will determine how the 50-50 Senate will function. There’s a good background story explaining this issue at The Week. I’m not going to try to explain it here. See also Now In The Minority, McConnell Fights For Tools To Block Biden’s Bills by Andrew Solender at Forbes.

Mitch is in the middle of many issues these days. The new article of impeachment will go to the Senate on Monday morning. This means the trial must start on Tuesday barring some agreement to delay it. I assume the timing of this was agreed upon between Nancy Pelosi and Chuck Schumer. McConnell wanted to delay the trial to give Trump more time to prepare. Maybe the trial is to be used as a bargaining chip, somehow.

CNN reports that Republican insiders are lobbying Republican senators to impeach and convict Trump this time.

As the House prepares to send articles of impeachment to the Senate on Monday, CNN has learned that dozens of influential Republicans around Washington — including former top Trump administration officials — have been quietly lobbying GOP members of Congress to impeach and convict Donald Trump. The effort is not coordinated but reflects a wider battle inside the GOP between those loyal to Trump and those who want to sever ties and ensure he can never run for President again.

The lobbying started in the House after the January 6 attack on the Capitol and in the days leading up to impeachment. But it’s now more focused on Sen. Mitch McConnell, the powerful minority leader who has signaled he may support convicting Trump.

… While the bar is high, some GOP sources think there is more of an appetite to punish the former President than is publicly apparent.

The Republican establishment wants Trump gone, I tell you. Not just gone; they want him ruined and neutered and exiled to Siberia, or maybe even Nebraska. They don’t want him continuing to influence elections. They don’t want him to run again in 2024. They especially don’t want him to start a third party, as he’s threatened to do. If he rots in jail the rest of his life, they’d be okay with that. As long as he’s gone. And if he’s convicted by the Senate, that solves their problem. They can stipulate that he never again hold public office in the U.S. So, it could happen. All Senate Democrats plus seventeen Senate Republicans, and he’s convicted.

There are plenty of Republican dimwits in Congress who aren’t getting the memos, but most of them are in the House.

Trump had yet to assemble a legal team, CNN says.

Democrats, including the Biden Administration, actually are more interested in moving ahead with the Biden agenda. I understand President Biden wants to get the trial over with asap. Deocratic senators want to be able to split the Senate’s time between the trial and other concerns. Republicans will fight them on that.

So there are bumps ahead. But Paul Waldman thinks the Republican Opposition Machine may not work as well any more.

That outrage machine works not only by getting conservatives worked up so that, for instance, they’ll turn out to vote in the midterm elections, but also by creating fear in Democrats, fear that alters those Democrats’ behavior. But I don’t know that I’ve ever seen a time when Democrats were less afraid of Republicans.

Yes, there are plenty of moderate Democrats who advocate centrist solutions and worry about ticking off their constituents if they go too far to the left. But as a whole, Democrats now have a deeper understanding of the dynamics of Republican opposition than they used to. That includes Biden himself and those around him.

They’ve learned from the mistakes of the Obama years, including the way his administration and congressional Democrats negotiated with themselves and assumed that substantive concessions and good-faith bargaining could get Republicans to support legislation that would be of political benefit to a Democratic president.

The Biden team is not in the grip of that delusion. All indications are that they start from the assumption that Republican opposition will be total; they’re willing to take a shot at getting some Republican support for, say, a covid-19 relief package, but they won’t waste too much time chasing it.

See also Waldman’s Want to understand the GOP’s problem? Look at its newly elected extremists. “What sells in today’s GOP is performative lib-owning,” Waldman writes. “The most ambitious Republicans, even those who are themselves quite smart and well-educated, see their path to success as pandering to the dumbest and most deluded people in their party.” This means Republicans aren’t likely to become sane or serious anytime soon. But I wonder how a party of grandstanding narcissists, each one dedicated to calling attention to himself by “owning the libs,” can actually function as any kind of party? Especially against a mostly unified Democratic party with a clear agenda? 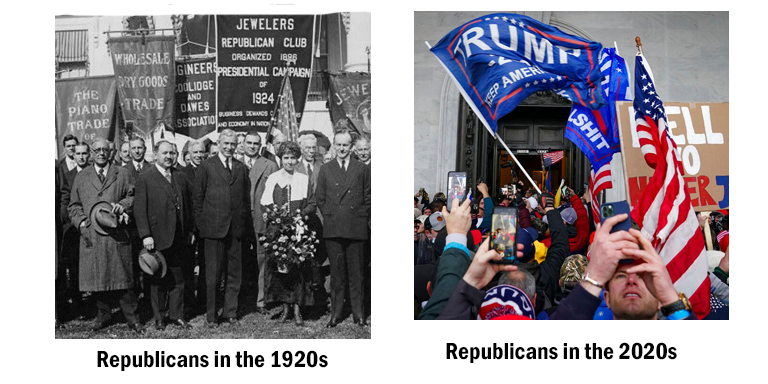