Sen. Josh Hawley on Monday filed a counter-complaint with the Senate Ethics Committee against the seven Senate Democrats who had previously filed a complaint against him and Sen. Ted Cruz over the two Republicans’ objections to the results of the 2020 presidential election.

“The idea that one Senator who disagrees with another Senator can therefore have that Senator punished, sanctioned, censured, or removed is utterly antithetical to our democracy and the very idea of open, lawful debate,” Hawley (R-Mo.) wrote in a letter to the seven Democrats.

It may be that Hawley assumed his challenge of the Electoral College votes was a harmless stunt that wouldn’t succeed. It may be that he didn’t realize how violent the attack on the Capitol would get. But stunts like that must not be allowed to become a standard part of our elections. Because eventually they will overturn an election. And the mob already got people killed.

Sen. Josh Hawley (R-MO) invoked the ironclad “I know you are, but what am I?” defense on Monday with a formal demand for an ethics investigation into the Democratic senators who requested an investigation into his attempt to overturn the 2020 election.

“The Senate cannot function if its neutral administrative processes are hijacked for bad-faith ends, but that is precisely what is occurring here,” wrote Hawley, who had voted to throw out electors from swing states that went to Joe Biden during what was supposed to be Congress’ procedural ratification of the election results.

Hawley also penned an irony-free letter to the Democrats complaining that their request was “utterly antithetical to our democracy.”

In his complaint, Hawley actually accused the Democratic senators of “Fabricating conspiracy theories to attack me for political purposes.”

Determined to make a fool of himself in public, Hawley also is complaining that free speech is being muzzled in America. Jonathan Chait:

Josh Hawley’s lifelong quest to the presidency was initially supposed to run through elite channels of conventional Republican advancement. During the last four years, the plan suddenly changed, and Hawley fashioned himself a Trumpian populist railing against his own class. Now the blueprint has changed once again. Hawley is casting himself as a dissident, a modern Mandela or Solzhenitsyn.

His manifesto has somehow been smuggled past the censors and published on the front page of the New York Post. Its headline decries “the muzzling of America,” presenting Hawley himself as the most prominent victim of a scourge threatening every American man, woman, and child.

Only in America could someone so oppressed by Big Brother get his complaints published on the front page of one of the top ten (by circulation) newspapers in the country.

Boiled down into plain English, Hawley’s “muzzling” consists of calls for resignation from some of his political opponents (and me; as a constituent I email him regularly explaining what I think of him); several of his donors have pledged to stop giving him money; and Simon & Schuster canceled his book deal, forcing him to take his manuscript to a another publisher. Solzhenitsyn should have had it so good.

Exactly which rights are being violated is a tad murky, but one of them is the infamous Right to Not Be Disagreed With that righties fervently believe is in the Constitution, somewhere. I’ve written about this before, such as here and here. See also Adam Serwer, Tribalism And Constitutional Rights, on this phenomenon.

There is also the deeply held belief in the right to a medium or venue of your choice. But, seriously, I have seen the First Amendment. That ain’t in there. There is no constitutional right to have your manuscript published by Simon & Schuster. There is no constitutional right to a Twitter account. There just isn’t. You can express your opinion freely, but if no one else wants to post or publish it, you may have to do it yourself. The First Amendment only restricts government from censoring you, not private publishing or social media companies.

But Hawley knows this good and well. He is not stupid. He has a fancy-shmancy law degree; he clerked for Chief Justice Roberts. He just thinks he is entitled to not suffer the consequences of his own bad actions. 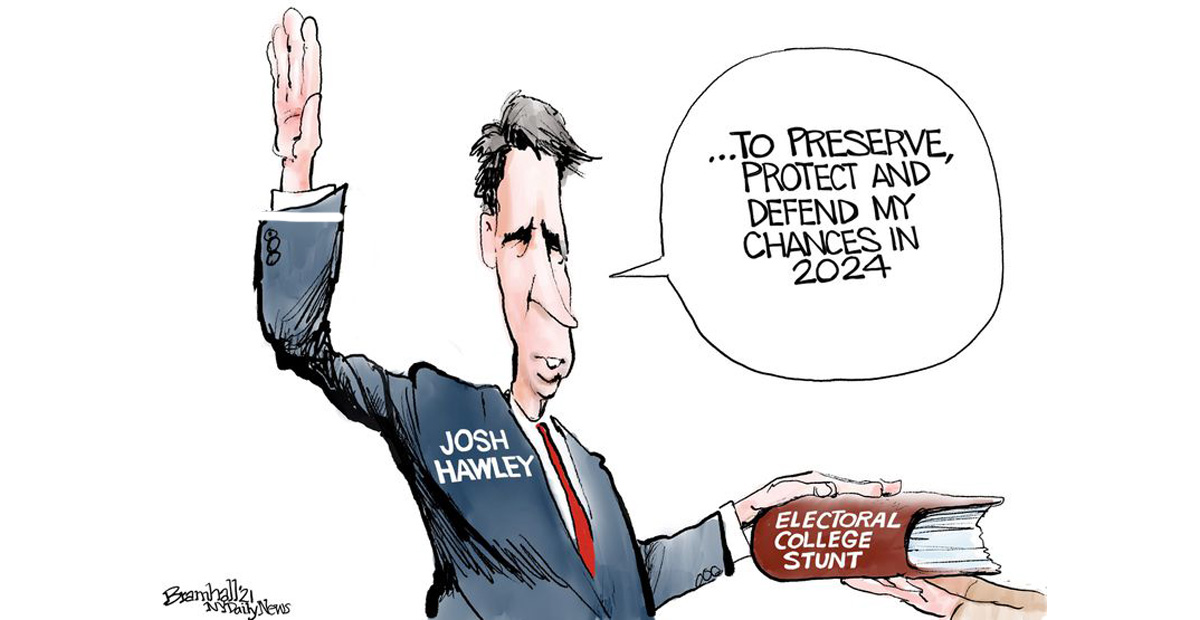