The big news today is that it appears Mitch McConnell has backed down on blocking Democrats from assuming the majority in the Senate and will allow the power-sharing agreement to proceed. I say appears because it is now afternoon in Washington DC, and from what I can tell from news reports the deal isn’t done yet.

The most recent news, from Mike DeBonis and Erica Werner at WaPo:

Senate Minority Leader Mitch McConnell warned Democrats Tuesday that Republicans would counter any attempt to eliminate the filibuster, the 60-vote supermajority requirement to move most legislation, with “immediate chaos” that would grind the chamber — and the Democratic governing agenda — to a halt.

McConnell delivered his admonition less than a day after he signaled he would move forward with a power-sharing agreement governing operations of the 50-50 Senate — only after two Democratic senators made public assurances that they would not support eliminating the filibuster.

“I’m glad we’re finally able to get the Senate up and running,” Schumer said. “My only regret is that it took so long.”

But McConnell, speaking after Schumer, said it was Republicans who had secured a victory, by ensuring that the filibuster is not in immediate peril. He went to on to describe in detail how the GOP would respond if Democrats changed their position and moved to eliminate the filibuster in order to pass their agenda.

Yeah, we can’t let the party that won the bleeping election pass their agenda, can we?

If Dems mess with filibuster rules, McConnell plans to raise objections to routine business and issue frequent quorum calls to gum up the works and stop Democrats from getting anything done. That’s what he said he would do, and I don’t doubt he will do it.

McConnell said Tuesday a further escalation would mean Senate business would move at “a snail’s pace” and “drain comity and consent from this body to a degree that would be unparalleled in living memory.”

Nah, I think McConnell has already done that. I don’t see how it could get any worse than it already is.

The question is, can the Democrats get around McConnell’s big red wall of no? I don’t understand Senate procedures well enough to answer that question. Greg Sargent:

But the bad news is that en route to this point, two moderate Senate Democrats — Joe Manchin III of West Virginia and Kyrsten Sinema of Arizona — further dug themselves in against ending the filibuster at any point. Though that could change, for now it risks weakening Democratic leverage against McConnell’s use of it to frustrate Biden’s agenda.

It’s always possible Manchin and Sinema could change their minds again, I suppose.

Waldman goes on to say that what’s at stake here isn’t just President Biden’s agenda. And it isn’t just getting a relief package to Americans asap. “No, what McConnell is threatening is even worse than all that. By Schumer’s analysis, successful McConnell obstruction would also continue undermining faith in democracy itself, making voters susceptible to another Trumpist demagogue,” Waldman writes.

In short, if Biden’s agenda passes and succeeds, it destroys the anti-government mythology that Republicans have used these past forty years to undermine democracy and turn the U.S. into a plutocracy.  Republican governance is about exploiting America’s people and resources for the benefit of the rich, and that’s that.

Assuming a power sharing agreement goes into effect in the next few hours, that’s just the beginning of the war. If legislation will still require 60 votes to move forward, the big red wall is still in place. They can use reconciliation to get past the 60 vote threshold on some bills, but not all the bills, I don’t believe.

On the plus side, Chuck Schumer insists he has learned the lesson of the obstructed Obama agenda and will not take McConnell’s “no” for an answer. “Schumer pledged that this time, Democrats will not get lured in by GOP bad faith, and vowed that Democrats will respond with procedural aggressiveness against McConnell’s all-but-certain duplication of that performance,” Paul Waldman says. So we’ll see. 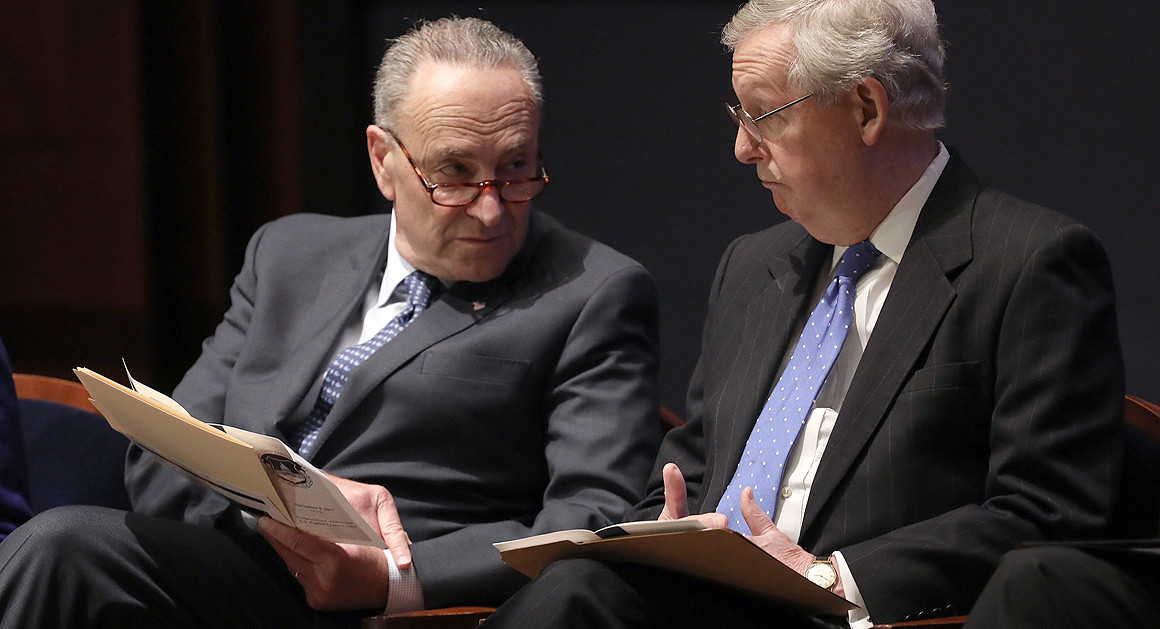 10 thoughts on “Mitch McConnell’s Big Red Wall of No”