Most of the major news outlets are tip-toeing around an obvious fact expressed in this Buzzfeed headline: Trump’s Pentagon Blocked Troops From Getting to the Capitol Riots For Hours, DC National Guard Commander Said.

Something really funky was going on in the Pentagon on January 6. That something involved Trump’s civilian Pentagon appointees, plus Michael Flynn’s brother, Lt. Gen. Charles Flynn. I believe most of the professional military would have deployed troops to the Capitol immediately, if they had anything to say about it. Obviously, some exceptions were at hand. But for some reason troops were held up for more than three hours, waiting for an order.

If you missed the testimony yesterday from DC National Guard commanding general William Walker, here it is.

Somewhere, before January 6, a decision was made that whatever happened at the Capitol would be allowed to happen without interference from National Guard. A fix was in. We don’t yet know all the names of everyone in on the fix, or where it originated, but it sure as hell was in.

Here’s a review of what we know, from Max Boot:

Maj. Gen. William J. Walker, the commander of the D.C. National Guard, told a Senate committee Wednesday that he had been prevented by then-Army Secretary Ryan McCarthy from deploying a quick-reaction force or distributing weapons and riot gear before Jan. 6. McCarthy, in turn, was acting on the orders of then-acting defense secretary Christopher C. Miller. Walker said such restrictions were “unusual” and were not imposed during Black Lives Matter demonstrations in Washington.

When the attack on the Capitol began, Walker continued, he received a frantic call for assistance at 1:49 p.m. from the then-head of the Capitol Police and immediately relayed the request to the Pentagon. But it was not until 5:08 p.m.— three hours and 19 minutes later — that Walker finally received permission to deploy his troops. That was long after the Capitol had been overrun.

Dana Milbank pointed out yesterday that the order to send the Guard was held up until after Trump tweeted that the rioters should go home:  “Curiously, the Pentagon claims Miller’s authorization came at 4:32 — 15 minutes after Trump told his ‘very special’ insurrectionists to ‘go home in peace.’ Was Miller waiting for Trump’s blessing before defending the Capitol?”

And, of course, we all remember that Christopher Miller was appointed acting secretary of defense in November, after Joe Biden had been declared the winner of the election. And we all said, what the bleep? What is Trump up to?

The fix was in. Most of news media seems to be avoiding stating this obvious fact. They are saying that the delays need to be investigated. Well, yes. And I appreciate the need to avoid making accusations before all the facts are known. But, seriously, people, the fix was in. All we need now are names. Who was in on it? Who wasn’t?

And CNN is reporting that Federal investigators are examining communications between US lawmakers and Capitol rioters. This could get juicy.

Today was the day that Trump was supposed to return to Washington in glory and be sworn in as the real president, according to QAnon mythology. I see that QAnon mythology has mingled with some of the old “sovereign citizen” claptrap that’s been banging around in the fever swamps for years:

Back home on the QAnon ranch though, there is an even more extreme idea picking up steam: that Trump will still be inaugurated after all!

As the 19th President.

The idea borrows heavily from the sovereign citizens movement, which revolves around the theory that followers get to decide which laws to abide by because the true, original U.S. government has been secretly replaced by a new, illegitimate system. Sovereign citizens clog courts with convoluted legal filings, declaring they are not required to pay taxes and immune to punishment for breaking the law. There are various beliefs among the sovereign citizens about when the switch to the illegitimate government happened, but for the purposes of its overlap with the QAnon community, that date has been pinned down to 1871.

Then, per the various believers, an obscure 1871 law made the United States a corporation, not a government — meaning that any law passed since then doesn’t apply, and that the line of presidents stopped with Ulysses S. Grant. Trump, they contend, will be inaugurated as the 19th President on March 4, the day presidents were inaugurated prior to the passage of the 20th Amendment in 1933. Trump will reign over a newly restored republic.

Exactly how this was supposed to happen is a bit hazy. I take it the clouds would part and Trump would come floating out of the sky over Washington, to be greeted by Brett Kavanaugh to swear him in..But Capitol security is beefed up today, so storming the Capitol will be a bit trickier than it was on January 6. Trump is still in Florida, as far as I know.

From the “Where Are They Now?” files:

Richard Barnett, the rioter who put his feet on Nancy Pelosi’s desk and stole her mail, is still in prison. And he’s pissed about it. He threw a temper during a virtual court hearing about how it isn’t fair he’s been behind bars for a whole month, yelling at the federal judge and his own attorneys. Yeah, yelling at the judge always helps, dude. Keep doing that.

Jacob Chansley, the QAnon Shaman, told an interviewer that no he did not attack the country on January 6. He was only there to bring God back into the Senate. Chansley is also still in jail and refusing to take a covid vaccine. Good luck with that, champ.

Here’s someone who hasn’t done jail time yet, but ought to — read about Genevieve Peters.

Javanka have burned out, CNN says. Jared is not taking part in any of Trump’s current schemes, and Ivanka has told friends not to ever mention Washington in her presence. Works for me. 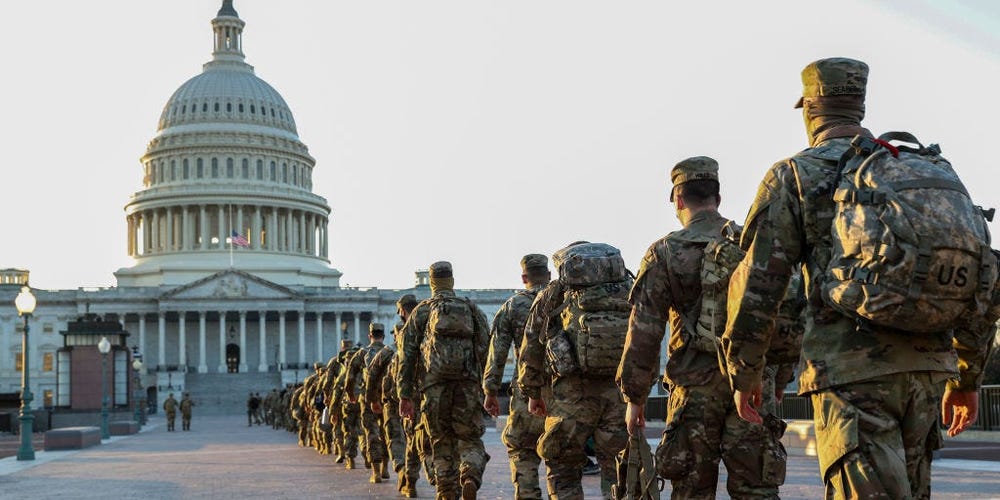