The Senate passed the covid bill, and now it goes back to the House. I hope the House just approves the Senate version without further delay, because I sincerely do not believe further negotiating in the Senate will improve it any. Also it really does need to be signed into law by this time next week so that unemployment benefits don’t lapse.

Josh Marshall puts the best spin on it:

The passage of Biden’s $1.9 trillion COVID relief bill is a massive political triumph. In the nature of online conversations there’s focus on the negatives. But it is difficult to convey how surprising and remarkable it is they managed to get this bill through all but untouched. This was a very aggressive proposal and almost certainly part of that was an effort to make a high opening bid because the need to get literal unanimity in the 50 senator Democratic caucus would get it whittled down. But they got it through all but untouched.

I don’t disagree. I’m frustrated the $15 minimum wage was cut, and that enhanced unemployment benefits will be $300 instead of $400 (but will last until September). But, otherwise the House version is intact, I understand.

But it is still, as the president might say, a big F-ing deal. $1.9 trillion is a whole lot of money. Sen. Bernie Sanders of Vermont called it “the most significant piece of legislation to benefit working people in the modern history of this country.” It’s more than double what President Barack Obama and Congress secured amid the Great Recession in 2009. The specter of that effort, the American Recovery and Reinvestment Act, loomed over this plan from the beginning, fueling the push to go big and act fast rather than pursue Republican votes they were never really going to get. They asked for a lot and they got a lot.

On the other hand, I also agree with Josh Marshall on this:

But I’ll say this again. A big, consistent and concerted messaging plan is critical to explain to the public just what is in the bill, how those things which are in it will connect to events over the next year and where everyone stood. There’s time. But I see little evidence of that happening so far. And it is critical because – as I keep saying – everything that happens from January 20th on needs to be part of an argument to voters (an explicit and voluble argument) about why they should keep Democrats in power in the 2022 midterm election.

Yes, yes, and yes. The “conventional wisdom” that has emerged in social media is that the bill is so expensive because it is loaded with pork. I’ve seen that even from people I know to be Democrats. I have skimmed the final House version of the bill, and while it’s entirely possible I missed something, I don’t see any pork.  It all looks pretty tight to me.

I say pass the thing and go on to other bills.

In freak show news, Trump has sent a legal notice to the GOP warning them to not use his name in their donation solicitations. I’m serious. Politico reports:

Lawyers for former President DONALD TRUMP sent out cease-and-desist letters Friday to the three largest fundraising entities for the Republican Party — the RNC, NRCC and NRSC — for using his name and likeness on fundraising emails and merchandise, a Trump adviser tells Playbook.

Last week the RNC sent out emails asking people to donate as a way of saying thank you to Trump. This apparently infurated Trump. I’m guessing that he doesn’t want his name used in donation solicitation unless the money is going to him. If the RNC has it, it’s going to be hard for him to get his tiny little hands on it. 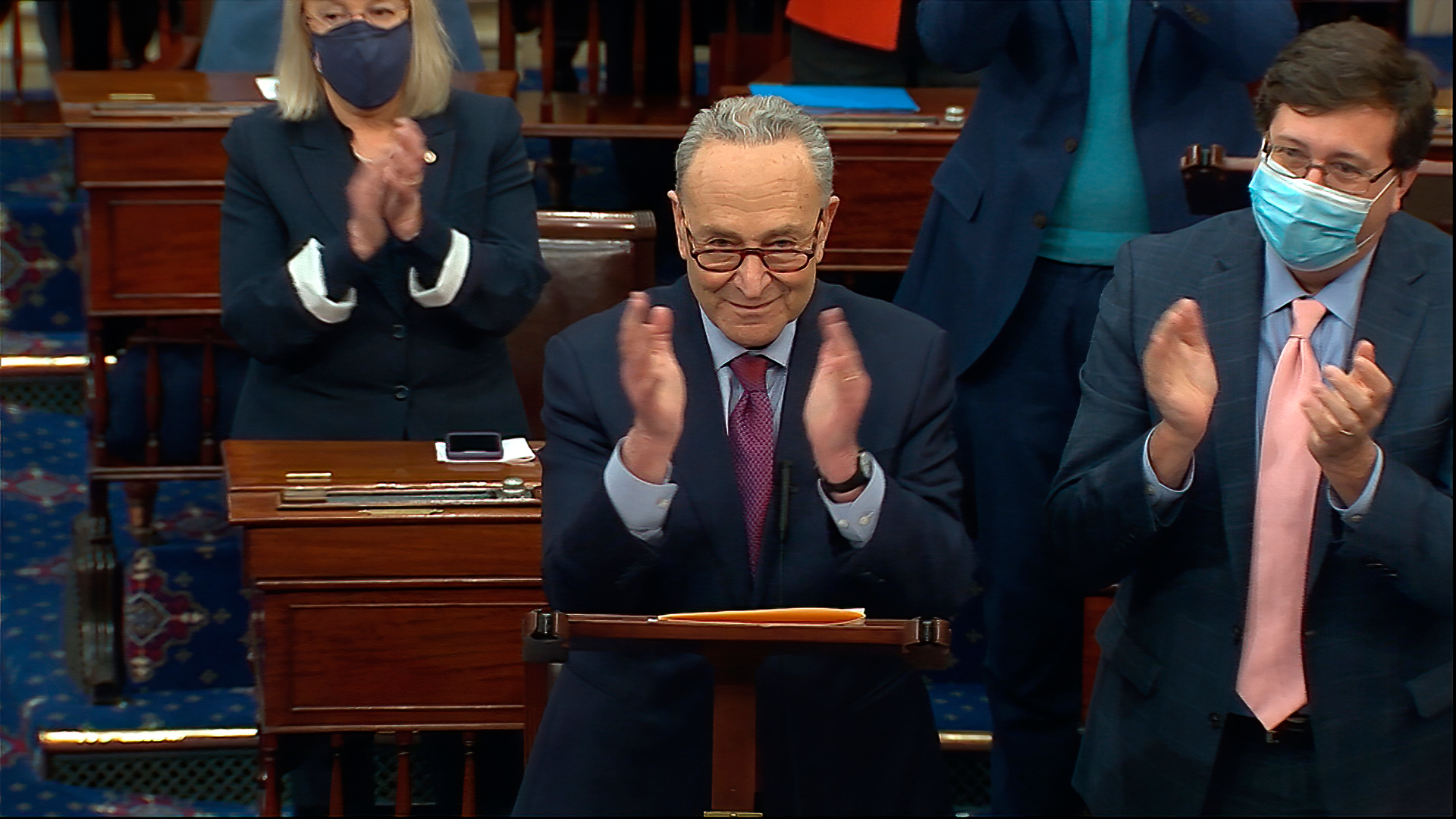 In this image from video, Senate Majority Leader Chuck Schumer of N.Y., leads a round of applause for support staff as he speaks before the final vote on the Senate version of the COVID-19 relief bill in the Senate at the U.S. Capitol in Washington, Saturday, March 6, 2021. (Senate Television via AP)

9 thoughts on “The Covid Bill Will Get Done”