Hard-right House Republicans on Friday were discussing forming an America First Caucus, which one document described as championing “Anglo-Saxon political traditions” and warning that mass immigration was putting the “unique identity” of the U.S. at risk.

I’m at a loss to know what “Anglo-Saxon political traditions” are, considering that the Angles and Saxons lost control of their territory in Britain a thousand years ago with the Norman Conquest of 1066. Most of the developments in British law and government that got exported here to the colonies were developed by the Normans, who came from France. This includes the Magna Carta (1215) and English Common Law, upon which early U.S. law was based. English Common Law was very much a Norman thing, according to Britannica. 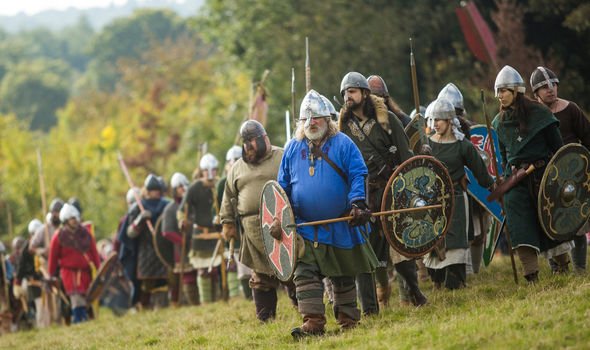 This got me wondering how “Anglo-Saxon” came to be a synonym for “white people,” since most white people are not Anglo-Saxon. Indeed, it’s estimated that only about a third of the DNA of modern-day English people is Anglo-Saxon. 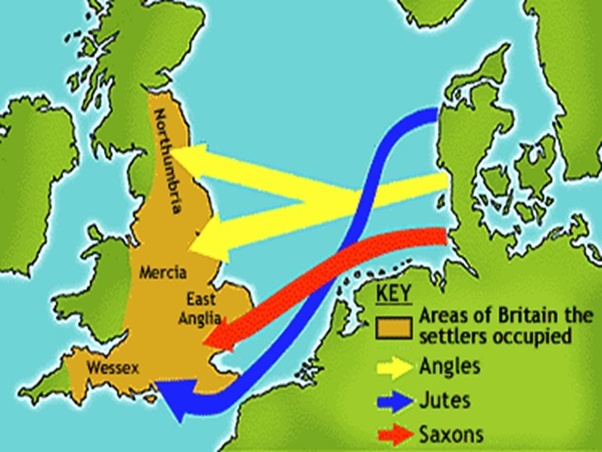 This is a simplified map. The invadors didn’t all come from Denmark.

Greatly over-simplifying a lot of history: After the Roman occupation of Britain ended in about the year 410, German-speaking tribes crossed the channel and began taking over. The three major tribal groups were the Angles, the Saxons, and the Jutes. Everybody forgets about the Jutes, who may have been lovely people for all we know, but let’s continue. The diverse tribes spoke similar Germanic languages (the original Old English was a Germanic language), and once in Britain they appear to have forged a common cultural identity, although according to one scholar the term “Anglo-Saxon” didn’t come into widespread use until the 18th century or so. The Germans in 1st millennia Britain more often called themselves either “Angle” or “Saxon” than Anglo-Saxon.

What little we know of that period of British history shows us that the German invaders fought the indigenous Celts and eventually occupied a territory that was roughly where England, Angle-land, is now. The Celts appear to have been pushed into the “fringe” — Scotland, Wales, Cornwall — by the Germans. That’s a bit disputed, but it’s a common view. There is a popular but unproven theory that the original “King Arthur” was a Celtic chieftan who fought the Saxons. And then in the 11th century the dominance of the Germanic tribes in Britain came to an end with the Norman Conquest. In the years that followed there was resistance and rebellion, but in the end the Normans prevailed. Much of the old Angle and Saxon nobility fled their confiscated lands and headed for Celtic territory or Scandanavia.

Knowing this, how did it come to pass that “Anglo-Saxon” came to designate “white people,” at least among English speakers, and “White Anglo-Saxon Protestant,” or WASP, came to be shorthand for “snotty upper-class white people”?

The scholar cited above, Mary Rambaran-Olm, and some of her colleagues say the whole notion of Anglo-Saxons as the epitome of whiteness began in the late 1700s. At the time, the British were keen to justify their growing colonial empire around the globe, and a myth of the very white Anglo-Saxons as the creators of English civilization, even though they weren’t, seized the public’s imagination at the time and “informed” the English that they were a naturally superior people who were doing all these simple brown natives a favor by exploiting them. I assume the Normans, being French, just weren’t white enough to serve the same purpose.

This makes me think of Sir Walter Scott (1771-1832), and his novel Ivanhoe. If you have read it or seen one of the film versions, you’ll remember that the title character is a fair and noble Saxon being oppressed by the sleezy Normans, and in the novel much attention is paid to the blondness of the Saxons in comparison to the darker Normans and the even darker Jewish characters, Isaac of York and his daughter Rebecca, who at least were treated sympathetically. In the 1952 film version Rebecca was played by Elizabeth Taylor.

As a sidebar, do read ‘It’s all white people’: Allegations of white supremacy are tearing apart a prestigious medieval studies group about how Mary Rambaran-Olm resigned from being a vice president of the prestigious International Society of Anglo-Saxonists because, she said, the term “Anglo-Saxon” has too many racist implications and the society had refused to change its name. Another scholar who resigned, Eileen Fradenburg Joy, said,

“The entire field of medieval studies is undergoing massive upheaval because they have not dealt with long-standing issues of racism and sexism,” Joy said. “This name change controversy is sowing the fault lines that still exist between white scholars — because it’s all white people, a bunch of white people arguing over whether they’re racist.” 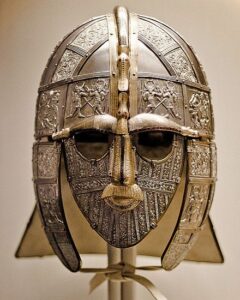 So there’s that. I honestly don’t know much about the Anglo-Saxons except that they wrote Beowulf (probably) and made fancy helmets.

The Anglo-Saxon myth is similar to the even dumber Aryan myth. In the late 19th century the notion took hold in Europe that an ancient people who migrated around from Eurasia to the Ganges and called themselves “Aryans,” or “noble ones,” were somehow the original white people who created civilization itself. From this came Aryanism, or the theory that since white people created civilization, whites were naturally a superior race entitled to rule other races.

In reality, “Aryan” and its many derivatives in several early Indo-Persian languages was probably less a racial than a cultural or tribal designation, and if we could go back in time 3,000 years or so and take a look at the people calling themselves Aryan most of them probably wouldn’t be all that white. It’s also the case that long after the great pyramids had been built in Egypt, the Aryans were still nomads who would have been challenged to erect so much as a storage shed. And archeologists say they made really bad pots.

Now let’s go back to the America First Caucus and their Anglo-Saxon political traditions.

Far-right Republicans in Congress are forming an “America First Caucus” that would promote nativist policies, according to materials outlining the group’s goals first obtained by Punchbowl News.

Reps. Marjorie Taylor Greene (R-Ga.) and Paul A. Gosar (R-Ariz.) are reportedly behind it, with Reps. Barry Moore (R-Ala.) and Louie Gohmert (R-Tex.) signed on as early members. Rep. Matt Gaetz (R-Fla.), who faces federal and House Ethics Committee investigations over allegations of sexual misconduct and illicit drug use, tweeted that he was joining Greene in the caucus.

Even some of the other hard-right specimens in Washington recognized that this was going beyond dog whistles and into white sheet/burning cross territory. See Andrew Solender, Forbes, America First Caucus Rejected By Right-Wing Freedom Caucus.

Members of the right-wing Freedom Caucus are among a wide array of House Republicans rejecting a nascent group being organized by Reps. Marjorie Taylor Greene (R-Ga.) and Paul Gosar (R-Ariz.) whose platform reportedly aims to preserve “anglo-saxon political traditions.”

The publication Friday by congressional newsletter Punchbowl News of a seven-page document appearing to be the America First Caucus’ platform was met with “fury” by top members of the Freedom Caucus, a source with knowledge of the group’s internal discussions told Forbes. …

…Freedom Caucus members that Punchbowl reported to have “agreed to join” the America First Caucus, Reps. Louie Gohmert (R-Texas) and Barry Moore (R-Ala.), told Forbes they have not yet decided whether to do so.

That’s on top of criticism from other House Republicans, including Minority Leader Kevin McCarthy and Conference Chair Liz Cheney, with Rep. Adam Kinzinger (R-Ill.) calling for the GOP to expel any conference member who joins and strip their committee assignments.

Marjorie Taylor Greene had already been relieved of her committee assignments, of course, so I doubt she cares. However, by today she was saying that she hadn’t even read the document published in Punchbowl. So she must have been slammed pretty damn hard by other House Republicans. Can’t say the quiet part out loud, Marjorie. You need to learn that.

15 thoughts on “The Truth About Anglo-Saxons”