It is alleged there are ten “moderate” (a relative term) Republican senators who call themselves the “G-10” (nobody will say what the G stands for) and who feel very put out that they can’t get President Biden to negotiate with them. He didn’t negotiate on the covid bill, they say, and he isn’t negotiating on the infrastructure package.

It’s not clear to me which ten are THE ten. The ten who met with President Biden on the covid bill were Bill Cassidy, Louisiana;  Susan Collins, Maine; Shelley More-Capito, West Virginia; Jerry Moran, Kansas; Lisa Murkowski, Alaska; Rob Portman, Ohio; Mitt Romney, Utah; Mike Rounds, South Dakota; Thom Tillis, North Carolina; and Todd Young, Indiana. But some new reports make Roy Blunt, Missouri, one of the “moderate” Republican senators put out because the administration didn’t negotiate with him. That would make eleven.

The truth is that this crew are terrible negotiators. Matt Bai writes at WaPo:

After Biden proposed a $1.9 trillion relief bill, on which he was probably expecting a reasonable counteroffer, the 10 Republican senators answered with a proposal for … $600 billion. That wasn’t even in the Zip code of reasonable.

Even then, they couldn’t guarantee the vote of every Republican in the room for their smaller package, much less anyone else in the caucus.

And yet these senators were apparently shocked when Biden refused to stop Democratic leaders from advancing his bill along party lines. I guess he was supposed to bargain against himself instead.

Of course, in the past the Democratics did bargain against themselves, so being unreasonable has worked for Republicans. Oh, and Bai thinks the “G” stands for “grumpy” or “geriatric.”

All this might have made sense if it were really just the kind of strategic feint Republican leaders used during the Obama years: Offer something obviously untenable and then gleefully blame the president for refusing to compromise. But this group actually seemed to think they were going to drive away in the car.

They seem to have forgotten that when a president wins an election by almost five percentage points, gets control of both chambers of Congress and proposes legislation that clear majorities of the country support, he really doesn’t need to meet you halfway.

They just spent four years watching a president of their own party rack up ungodly debt for no reason other than to reward rich people with tax cuts, and they barely registered a complaint.

Even when Donald Trump sought to overturn an election and dismantle the democracy, the self-aggrandizing G-10 did nothing but issue a few disparate statements.

But when Biden passes an economic bill by reconciliation, and then threatens to drive through an infrastructure bill rather than meet Republican demands to cut it by more than half, these same moderates suddenly care deeply about fiscal sanity and fair process.

Moderate Republicans are accusing Joe Biden of secretly plotting to enact the policies he campaigned on.

In interviews with Politico Wednesday, staffers for the “G-10” — a group of ten Senate Republicans with an ostensible appetite for compromise — claimed that the president’s avowed interest in bipartisanship is insincere. In their account, Biden’s negotiations with the G-10 over infrastructure are a mere formality; his true intention is to make Republicans an offer they can’t accept, then use their refusal as a pretense for passing his $2.25 trillion plan through budget reconciliation.

Levitz writes that the “moderate” Republicans seem to not realize how weak their position is. And it’s weak for several reasons. First, the infrastructure bill is polling very well.

It’s hard to make voters afraid of better-paved highways, new manufacturing jobs, at-home care for the elderly, or any of the American Jobs Plan’s other components. Recent polls from Morning Consult and YouGov suggest that virtually every item in Biden’s proposal commands supermajority support, while 65 percent of voters endorse paying for the measures through a corporate tax hike.

Second, Democrats just learned they can pass a big bill on a party-line vote and not suffer a backlash. Hmm. It’s also the case that a “majority of Republican House members voted to nullify the 2020 election because Democrats won it,” which kind of makes their declarations of love for bipartisanship ring a tad hollow.

He notes that Republicans engaged in talks with the White House are feeling used. “But what is it that these Republicans actually want?” He asks. After they had made a stupidly low offer on the covid bill, the Administration actually gave them something — “making the bill’s stimulus payments phase out more quickly for those with higher incomes, an issue they raised specifically.” But of course they all voted against the bill anyway.

So they’re scared that this bill will turn out the same way the American Rescue Plan did: The moderate Republicans have some meetings with Biden; he listens to their ideas and perhaps adopts a bit of what they want; in the end they say, “Not good enough,” and all vote against the bill; the bill passes through reconciliation with only Democratic votes; it gives the public a bunch of things they like; and Biden gets all the credit.

Yes. And why would the Democrats not do that? This is what the allegedly “moderate” Republicans can’t seem to grasp.

Waldman makes a bold proposal: These ten (or eleven) Republicans could easily put themselves back in the game by really negotiating and pledging to vote as a block for the bill if they get certain changes, and then make a reasonable offer. As Matt Bai wrote, you don’t offer $3,000 on a $10,000 car. Maybe if they’d offer $8,000 they’d get the car. And then they’d have their names on a popular bill, and ten Republican votes means the filibuster isn’t an issue.

That’s the only thing they have to offer. The onus is on them to convince Biden and Democrats that if the right deal can be worked out, all of them, without exception, will defy Senate Minority Leader Mitch McConnell (R-Ky.) and vote with Democrats on an infrastructure bill — even knowing Biden will get most of the credit for the results of the bill and for being bipartisan, too.

Yes, that’s the only thing they have to offer. A pledge of ten Republican votes would be valuable to the Democrats. And it probably won’t happen.

Since all 10 of them voting for any bill that would help a Democratic president is so unlikely, and since Democrats have reconciliation as the trump card they can use if they have to, the Republicans are in an extremely weak position. That means that when it comes time to negotiate the details, they have to meet the Democrats not just halfway, but more than halfway. Maybe two-thirds of the way, or even five-sixths of the way (which would seem appropriate if they’re going to be 10 votes out of 60).

That’s the reality of negotiating from a position of weakness: You’re just not going to get everything you want. If you want to get anything at all, you’re going to have to give up a lot.

So to repeat: What exactly do these Republicans want?

But that’s the problem — all they want is to not pass most of the bill. They’re only against stuff, not so much for stuff.  It’s hard to imagine what bill they would vote for.

So now the Republican moderates are faced with two choices: They can make real substantive and political sacrifices to have a genuine role in shaping the bill, or they can just whine about not getting everything they want. I know which outcome I’d put my money on.

This afternoon President Biden met with a small “bipartisan” group of senators, some from both parties, to discuss the infrastructure package, and we’ll see if anything comes out of it. The Administration has already agreed to not raise the corporate tax rate above 25 percent, a concession to Joe Manchin. Other adjustments may have to be made to pay for the bill. A disagreement among Democrats has emerged over the SALT tax cap. SALT stands for “state and local tax” deduction on federal taxes, and some Dems in blue states like New York very much want to lift the cap that the Trump Administration put on deducting the taxes. So there’s a long way to go yet on this bill, it appears. Republicans can jump in any time they want to get real. 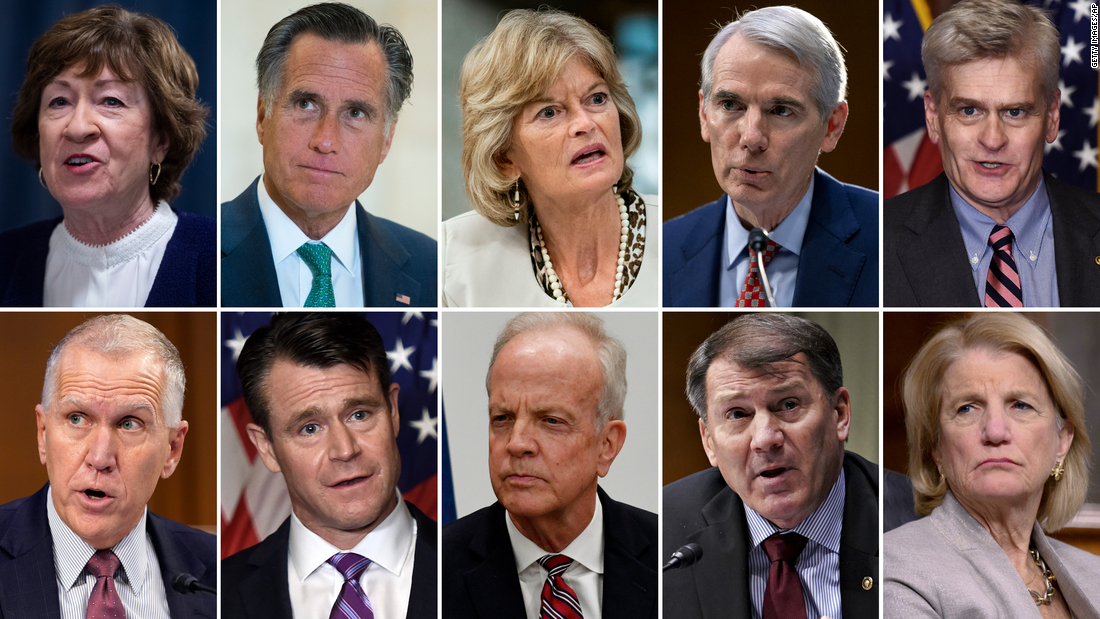 5 thoughts on “Ten GOP Senators, Sitting in a Tree …”