Are Republicans the party of Reagan or the party of Trump? Are they the party of big investors, or free market libertarians, or the working class? They can’t seem to decide.

Last month a flurry of news stories broke out about how the GOP is “rebranding” itself as the party of the working class. See, for example, Susan Davis, NPR, Top Republicans Work To Rebrand GOP As Party Of Working Class; and Paul Waldman, WaPo, Republicans want to be a working class party. But not that much.

This proposed rebranding makes a kind of sense, seeing that working-class white people who believe in Donald Trump appear to be among their most fervent voters, beside maybe white evangelicals. Note that the two groups probably overlap a lot. But what do Republicans have to offer the working class? Waldman, in the article linked above:

Take, for instance, the memo Rep. Jim Banks (R-Ind.) recently wrote for Republicans entitled “Cementing the GOP as the Working-Class Party.” It argued that continuing the success Donald Trump had (never mind that he lost the popular vote twice) will require “enthusiastically rebranding and reorienting as the Party of the Working Class.”

The revealing part, however, is the actual policy suggestions Banks offers. In their entirety: harsh immigration policies; protectionism on trade; “Anti-Wokeness”; opposing “Wall Street” by complaining about covid lockdowns that hurt small businesses; and going after technology companies’ “censorship” of conservatives.

WTF? Waldman cites several other examples, which basically all boil down to culture war issues. They are offering nothing that would make the real lives of working-class Americans any better — not better wages, access to health care, paid leave, nothing. But we’ll get those big tech companies that censored Donald Trump!

Even Henry Olsen, a conservative columnist at WaPo, has figured out that this ain’t gonna work. He points to an alternative budget released Wednesday by the 152-member House Republican Study Committee. It’s basically warmed-over Paul Ryan. Here are some highlights:

The proposal’s most notable features are its changes to the major entitlement programs most Americans rely on in old age. The age at which one receives full Social Security benefits would go up to 69 by 2030, from a planned rise to 67 in 2022. Medicare’s eligibility age would rise from 65 to 69.  …
… Medicare’s structure would also be thoroughly transformed. Instead of a guaranteed government set of policies, the RSC budget would instead provide a subsidy for premiums that could be used for any insurance plan, including a new “Fed Plan” that would replace traditional Medicare. The subsidy would be based on income, wealth and health status, and every senior would then be responsible for buying their own plan and paying for any difference between the federal subsidy and that plan’s premium from their own pocket.Many, if not most, retirees would pay more for their health insurance than they do now.

Yeah, the seniors will love that one.

Millions of Americans who get health insurance through Medicaid, the Children’s Health Insurance Program or the Obamacare exchanges could also see dramatic changes. All of these programs would be block-granted to states, meaning the program’s funding mechanism would be changed so that the federal government pays each state one lump sum each year.

That block grant proposal has been floating around for a long time. The point is to allow states to make their own decisions about who is eligible for the money, which in the case of red states would be pretty much nobody. And all those people who are getting Medicaid under the ACA expansion can kiss that off.

Henry Olsen is fine with all this, mind you, but he has polling that tells him those working-class voters might not be happy about it.

Sixty-three percent of Trump voters, for example, want to keep Social Security benefits the same for future retirees as they are for current recipients, even if payroll taxes must increase. Forty-five percent of Trump voters would rather ensure every senior citizen gets the health care they need regardless of the cost of Medicare to society; that number rises to 58 percent among voters who backed President Barack Obama in 2012 and President Donald Trump in 2020. A 2017 study found that nearly half of “American Preservationists,” a core demographic among 2016 Trump supporters, would be threatened by the budget’s proposed cuts to Medicaid and the Obamacare exchanges. Of this demographic’s members who are younger than 65, 44 percent received their health insurance from government. That’s up to seven times more than similar members in other Trump-backing demographics.

Let’s face it, Henry. Medicare and Social Security are about the only supports a lot of working-class people can count on in their senior years. They paid into those programs, and they expect to get them just as before. And a whole lot of working-class people don’t get health benefits any more; their only hope of getting insurance is through the dreaded Obamacare. Deal with it.

The RSC alternative budget also clings to free-trade orthodoxy. “Free trade is how we put America first,” it says. But a significant majority of working-class folks are suspicious of free trade and believe it has cost them lots of jobs, especially the better-paying manufacturing jobs that once supported a comfortable way of life for their parents and grandparents.

Are you taking notes, Democrats? There need to be ads about this next year. Lots of ads.

Also at WaPo, Michael Scherer and Josh Dawsey write that Republicans struggle to define a new governing coalition as Trump closes grip on party. They describe a standoff at a conservative rally between a giant pink pig (a parade float sponsored by Americans for Prosperity) and a pro-Trump float featuring a very big sound system.

Americans for Prosperity, a free-market group that helped propel the tea party uprising in 2009, drove in the pig to make a point at a conservative rally about federal earmark spending. The Trump rig, equipped with a sound system and pulled by an old ambulance, posed a threat.

“This event is not about Trump,” said Annie Patnaude, the Michigan director for AFP, explaining why the Trump display had to move away from the live band and full buffet tables she had set up. “This is about pork.”

To clarify, the pink pig was painted with the words “End government waste.” “Government waste” to AFP is, of course, any program that doesn’t put money into the pockets of rich people.

Rob Cortis, the [Trump] float’s owner, hails from the now dominant part of the Republican Party, in which the former president is still celebrated by many as the rightful winner of the 2020 election, a debunked claim. A list of Trumpian priorities — from “infrastructure” to “Stop the Steal” — were bolted to his trailer, with no mention of the old conservative traditions of limited government or lower debt.

The AFP and similar long-time factions are finding themselves being elbowed out by the Trumpers, who are all about Trump and his grievances and not much else. The Old Guard is worried that the Trumpers, and performative grievance candidates like Mark McCloskey, are going to continue to drive educated surburbanites away from the GOP. Plus, all kinds of polling show broad support among working people in swing states for raising taxes on rich people to pay for things, like infrastructure. This, of course, is heresy.

Also at WaPo, see Jennifer Rubin, Democrats must make the GOP spell out what it is for and against.

The things they [Republicans] oppose tend to be overwhelmingly popular. So they paint the agenda with the broad brush of “socialism.” Rather than insisting they are not socialists, Democrats should ignore the label and demand that Republicans specifically explain what they oppose and why. What is wrong with making corporations pay some taxes? Why don’t they want to provide two years of free community college? Do they really not want to rebuild Veterans Affairs hospitals, decrepit water systems and power grids?

Exactly right. Go on the offensive. And next year, run negative ads about Republican candidates hanging their real words and real positions around their necks. 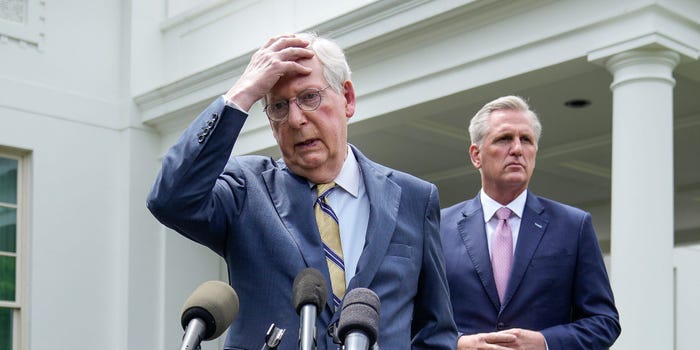