President Biden’s Memorial Day address was quite good, I thought. I just want to make note of this part:

What we do now — what we do now, how we honor the memory of the fallen, will determine whether or not democracy will long endure.  We all take it for granted.  We think we learned in school.  You have to — every generation has to fight for it.

But, look, it’s the biggest question: Whether a system that prizes the individual, that bends towards liberty, that gives everybody a chance at prosperity — whether that system can and will prevail against powerful forces that wish it harm.

More than 100 scholars of political science and related disciplines released an open letter today calling out a serious threat to democracy.

Specifically, we have watched with deep concern as Republican-led state legislatures across the country have in recent months proposed or implemented what we consider radical changes to core electoral procedures in response to unproven and intentionally destructive allegations of a stolen election. Collectively, these initiatives are transforming several states into political systems that no longer meet the minimum conditions for free and fair elections. Hence, our entire democracy is now at risk. …

… Statutory changes in large key electoral battleground states are dangerously politicizing the process of electoral administration, with Republican-controlled legislatures giving themselves the power to override electoral outcomes on unproven allegations should Democrats win more votes. They are seeking to restrict access to the ballot, the most basic principle underlying the right of all adult American citizens to participate in our democracy. They are also putting in place criminal sentences and fines meant to intimidate and scare away poll workers and nonpartisan administrators. State legislatures have advanced initiatives that curtail voting methods now preferred by Democratic-leaning constituencies, such as early voting and mail voting. Republican lawmakers have openly talked about ensuring the “purity” and “quality” of the vote, echoing arguments widely used across the Jim Crow South as reasons for restricting the Black vote.

You may have heard about the Texas Democrats who stopped passage of partricularly heinous voter suppression bill by walking out of the Texas House and denying the Republicans a quorum. Gov. Greg Abbott is threatening to withhold pay from lawmakers who walked out. There are plans for a special session to take up the bill again.

CNN reports that the Texas Democrats are calling for help from Washington.

Texas state Democratic lawmakers are calling for federal action after they derailed a restrictive voting bill, and President Joe Biden is sending a grim warning about Republican-led state efforts to restrict voting access.

With yet another GOP effort to restrict voting underway in Texas, President Biden is now calling on Congress to act in the face of the Republican “assault on democracy.” Importantly, Biden cast that attack as aimed at “Black and Brown Americans,” meriting federal legislation in response.

That is a welcome escalation. But it remains unclear whether 50 Senate Democrats will ever prove willing to reform or end the filibuster, and more to the point, whether Biden will put real muscle behind that cause. If not, such protections will never, ever pass. …

… Sen. Joe Manchin III (D-W.Va.) is the most visible obstacle here. But an unknown number of other moderate Democrats are also reluctant to cross that Rubicon, and it’s unclear how much effort Biden will put into making that happen.

Oh, yeah. Joe Manchin. And Kysten Cinema. And maybe some others. I am not seeing any obvious leverage that could be applied to force these deadbeats out of their complacency.

Much depends on how much President Biden, and key senators, still buy into the myth that the public wants bipartisanship more than they want to see shit get done, and “reaching across the aisle” will be rewarded by voters. I’d like to think they know better, but I can’t say they do.

So, what can we do? Is it time to take to the streets, again? 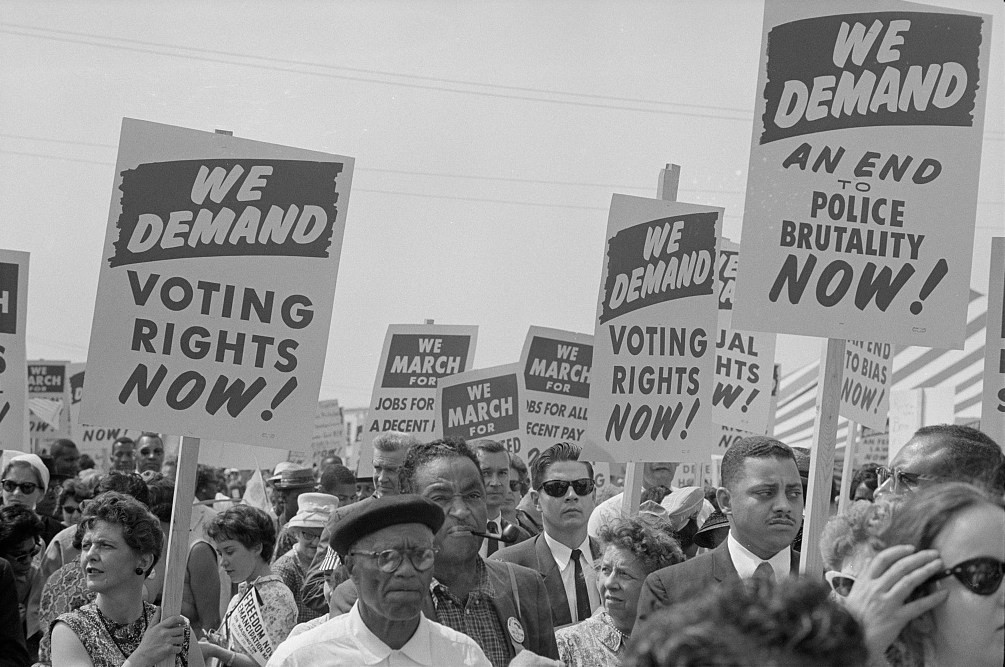 4 thoughts on “We Have to Fight for It”