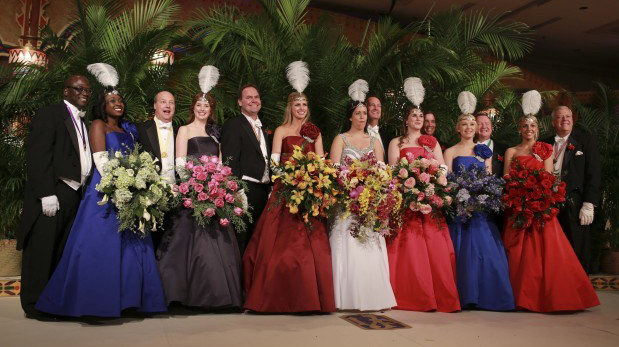 The 2012 Veiled Prophet “maids” and their fathers, Ladue News photo.

I am setting aside our impending implosion into darkness and tyranny to write about a stupid controversy involving an actress I’m not sure I ever heard of who starred in television shows I don’t remember watching. This also involves a bit of St. Louis cultural bric-à-brac that I hadn’t thought about in years. But I take it parts of the Internet are blowing up over this. I feel a need to clarify some stuff.

The actress, Ellie Kemper, was the 1999 Fair St. Louis Queen of Love and Beauty, a fact that shouldn’t be of any real importance to anybody but maybe the Kemper family. Fair St. Louis is an annual event hosted by the Veiled Prophet Organization, which hereafter I will call the VPO.

The VPO, which was once known as the  Mystic Order of the Veiled Prophet of the Enchanted Realm, is a profoundly weird cultural thing run by moneyed St. Louis families. The VPO was established in 1878, which is about the only fact regarding its establishment everyone agrees on. The primary stated purpose of the original VPO was old-fashioned civic boosterism. It was modeled after the New Orleans Mardi Gras; the “Mystic Order” was and is something like a Mardi Gras “krewe,” a social organization that puts on a parade or ball at Mardi Gras time, except in St. Louis there was and is only one krewe and you had to have yacht-fulls of money to buy your way into it. Unlike Mardi Gras, the VPO was never associated with any observance of the church year, I don’t believe. Over the years the dates for the VP festivities — primarily a parade and a fancy debutante ball — have moved all over the calendar.

Preciding over all public VPO festivities is a character called the Veiled Prophet, who wears elaborate robes and a veil that conceals his identity. The Prophet is supposed to be from a mystical kingdom called Khorassan. All that’s known is that the guy behind the veil is one of the VPO members. There are rumors the honor goes to the guy who paid the most money for it that year, but I don’t know if that’s true. 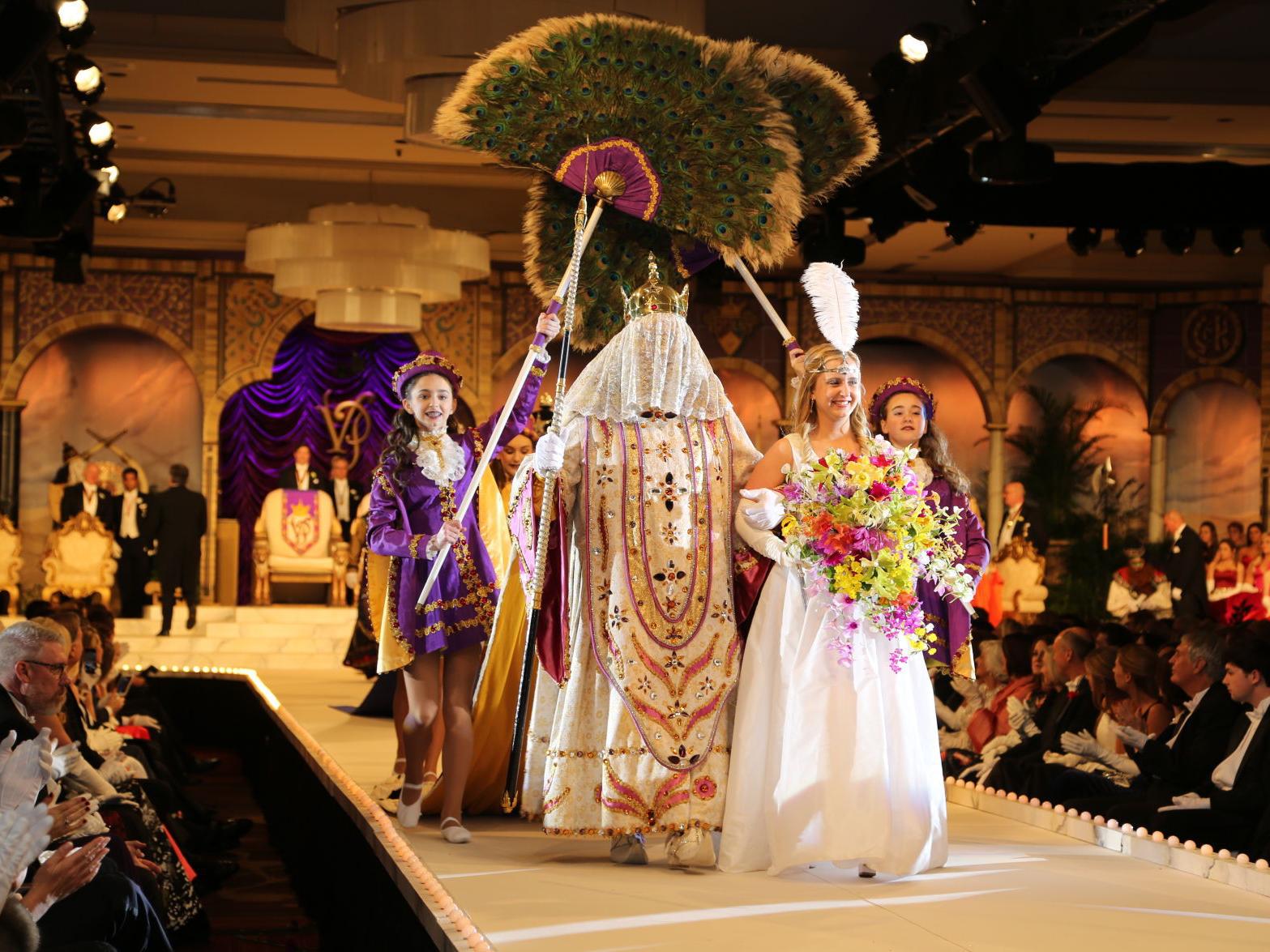 A robed Veiled Prophet and a Queen of Love and Beauty at the debutante ball, undated photo.

Beneath the civic boosterism, there are hints that the original VPO had some less noble purposes. This Atlantic article — which, I warn you, is partly fact and partly bullshit — associates the founding of the VPO with anti-unionism. The organization was also largely about promoting the leadership and privilege of the city’s old, elite moneyed families, which obviously it was. However, the attempt in the article to tie the VPO to the KKK is going too far, and I will explain this in a bit.

The VPO was all white until 1979, when it finally agreed to accept Black members. The Black members still had to have yacht-fulls of money to qualify for membership, so there aren’t a lot of them, but there are a few. Kemper is being slammed for associating with an institution with a “racist past.” As there are few institutions in the U.S. that don’t have a racist past, not to mention a racist present, this seems a bit unfair. I am also seeing claims that the VPO excluded Jews, but I can’t find any corroboration for that. I believe there were Jewish members long before there were Black members, anyway.

Regarding the alleged tie to the KKK — the author of The Atlantic article, Scott Beauchamp, found an old image of one of the early costumes of the Veiled Prophet and noted that it resembled a Klan robe. However, according to several sources the Klan itself didn’t take to wearing their signature robes until some time after 1878. (See, for example, How the Klan Got Its Hood from The New Republic, January 2016.) Also, several sources say both the Veiled Prophet robes and Klan robes are modeled after what were common Mardi Gras costumes of the time, which in turn were modeled after old Catholic penitent robes still worn in Europe here and there. The photo above shows what the Prophet’s robe has looked like for a long time, or at least as long as I can remember, which is not very Klannish.

The VPO isn’t what it used to be, frankly. Back in the 1950s the Veiled Prophet Ball was on local television every year. I remember watching it on our little black and white teevee. In the St. Louis area it was a thing one always watched, like the Miss America pageant and the annual broadcast of Peter Pan with Mary Martin and Cyril Ritchard. Anyway, what I remember about it is that the debutantes, or “maids,” wore these poufy princess ball gowns and tiaras with a single feather sticking up on top. And they carried enormous bouquets of flowers. As they were brought forward to be presented to the Veiled Prophet, they had to execute a deep bow that was almost a full prostration, all the while holding the bouquets with both hands, not letting their feathered headdresses fall off, and without tripping over the countless yards of fabric in those gowns. And I assume they were wearing heels.

I was always impressed. They had to have thighs of steel to pull that off.

And yes, the Veiled Prophet maids were all white in those days, but so were the Miss America contestants. However, the VP was more exclusive. Theoretically any pretty girl could be Miss America. But to be a VP maid, your family had to have yacht fulls of money, preferably old money. A little hillbilly girl from a blue collar family, like me, would never have had to execute that bowing maneuver no matter how white she was. For which I was somewhat grateful. It was terrifying just to watch.

In the late 1960s Black activists began to protest the ball and parade. In 1972 a few were able to crash the ball and un-veil the Prophet, who was a Monsanto executive that year. The VPO responded by, eventually, accepting Black members and establishing the Fair St. Louis, a public fair with lots of food and entertainment that anyone can attend. The Veiled Prophet Parade is now called America’s Birthday Parade, and participation is more democratic than it used to be.

The debutante ball is still a debutante ball. It hasn’t been televised for a long time, I don’t think, unless it’s on some funky cable channel I don’t know about.

So that’s the whole story with the Veiled Prophet of St. Louis. Yes, the organization has something of a hinky past, but it’s made some reforms. The current VPO gives a lot of money to charitable causes and is generally harmless, as far as I know.

According to Allegra Frank at Slate, in What It Means That Ellie Kemper Was Queen of the “Racist” Veiled Prophet Ball, on Monday May 31 someone tweeted something about the Veiled Prophet and how weird it is, and then someone else found that Ellie Kemper was once a Queen of Love and Beauty, and then people found the old Atlantic article with its KKK allegations, and before long Kemper was being roasted as the “KKK princess.” And now right-wing sites are screaming that a “liberal mob” is after Kemper and cancel culture and blah blah, but I don’t know of any connection between the Twitter users calling her the KKK princess and liberalism. Anyway, this is all very stupid, and people should just leave Ms. Kemper alone.