There are multiple reports today that Trump sincerely believes he will be “reinstated” as POTUS in August.

Trump has been telling a number of people he’s in contact with that he expects he will get reinstated by August (no that isn’t how it works but simply sharing the information). https://t.co/kaXSXKnpF0

Charles Cooke of National Review — not one of my usual sources — corroborates what Maggie Haberman says.

I can attest, from speaking to an array of different sources, that Donald Trump does indeed believe quite genuinely that he — along with former senators David Perdue and Martha McSally — will be “reinstated” to office this summer after “audits” of the 2020 elections in Arizona, Georgia, and a handful of other states have been completed. I can attest, too, that Trump is trying hard to recruit journalists, politicians, and other influential figures to promulgate this belief — not as a fundraising tool or an infantile bit of trolling or a trial balloon, but as a fact.

The scale of Trump’s delusion is quite startling. This is not merely an eccentric interpretation of the facts or an interesting foible, nor is it an irrelevant example of anguished post-presidency chatter. It is a rejection of reality, a rejection of law, and, ultimately, a rejection of the entire system of American government.

Chis Cillizza at CNN writes that Trump has gotten worse. I don’t see worse. His head was never screwed on all the way. IMO he’s more stupid than crazy, but of course I’m not a psychologist. It’s true he’s not well connected to reality, but I think that’s because reality doesn’t interest him. He sees no profit or pleasure in reality. Bullshit, on the other hand, is gold.

Trump is reportedly more obsessed than ever with the idea that the election was stolen from him. Asking whether he really believes that is a category mistake: Donald Trump doesn’t have “beliefs” about those sorts of things in anything like the normal sense of the word. He just says whatever he wants to say with literally no regard for truth, evidence, plausibility, or anything else. As many people have pointed out he’s not so much a liar as a bullshitter in Harry Frankfurt’s classic formulation (TL;DR version: a liar has to care about the truth in order to lie about it; a bullshitter is not even interested in the truth to the limited logically necessary sense that a liar must be).

Maggie Haberman’s tweet was in reponse to something about QAnon and Myanmar, or “MIN-a-mar” as one Trump cultie pronounced it. Apparently the Q-culties have had a thing about Myanmar for a while. See How Q And Trump Deadenders Became Obsessed With Myanmar by Josh Kovensky at TPM. The culties sincerely believe that Trump gave orders to the military before he left office to stage a coup, and this will happen sometime this summer.

I believe I’ve mentioned recently that Myanmar is seriously bleeped up. Nobody wants to be like Myanmar, including Myanmar.

Also — If you missed the Chris Hayes segment on Rand Paul’s obsession with quails on cocaine, here it is. It’s a hoot. 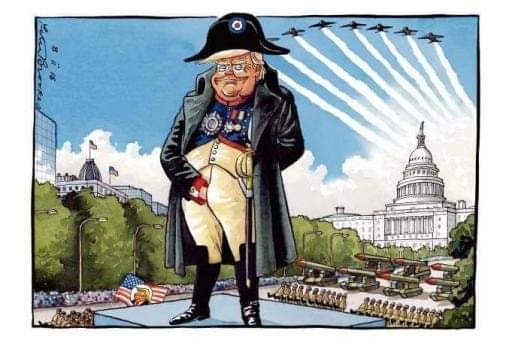 15 thoughts on “Welcome to Crazy World”