This is a moment when an implicit but ugly fact of our economy has been thrown into unusual relief: Our economy relies on poverty — or at least the threat of it — to force people to take bad jobs at low wages. This gets couched in paeans to the virtues of work, but the truth is more instrumental. The country likes cheap goods and plentiful services, and it can’t get them without a lot of people taking jobs that higher-income Americans would never, ever consider. When we begin to see glimmers of worker power in the economy, a lot of powerful people freak out, all at once.

In the United States, whether you earn a comfortable living or struggle to keep a roof over your head depends less on how hard you work but on what work you do. This doesn’t necessarily track with training and education. Even if your job requies specific training or a college degree, it might very well fall into the low-paying end. Social workers, teachers, and journalists come to mind.

All the years I was in publishing I couldn’t help but notice that people in sales and marketing got the big salaries and spacious offices, while most of the editors and editorial production people were paid either less or a lot less and worked out of cubbyholes with never enough space for all the manuscripts and proofs. It was explained to me that sales and marketing people “bring in dollars” while editorial and production do not; we were just cost.

The really low-paying jobs are in the service and food industries. These include health aides and day care workers.  These include the people who grow, process, distribute, and prepare our food. This is work that has to be done. For years whenever people talk about income inequality, somebody starts chirping about how people who want more money should get better training. But that’s not really the answer. Work that needs to be done should pay enough so that someone doing it full time can earn a living. And by “earning a living” I mean that individuals working full time at those jobs should not have to depend on food stamps and Medicaid.

If employers don’t want to provide health benefits for their low-income employees, they should start supporting Medicare for All or some other universal taxpayer-funded program, instead of whining about their costs going up.

I call your attention to an article from the June 2013 Harper’s, Education Is Not the Answer by Jeff Madrick. In spite of the time lapse it still seems pretty current. Among other things, he points out that during the recovery from the 2008 financial sector crash the typical American household saw its income fall every year. Further, “The percentage of American adults with college degrees, meanwhile, is greater than ever, having grown in the past decade from 26 to 30 percent. Every year our country is better educated, while wages remain stagnant or fall.” And with more college graduates in the job market, employers began hiring them to do work a high-school grad used to do. At the same pay.

I liked this part also: “The labor economists David Card and John DiNardo have shown that in the postwar period inequality rose fastest between 1980 and 1986, before rapid advances in computer technology began to affect the job market.” Um, gee, what else happened between 1980 and 1986? Reaganomics, anyone?

Fast forward to July 2020, and A college degree is not the solution to U.S. wage inequality by Kathryn Zickuhr at the Washington Center for Equitable Growth. Zickuhr addresses some of the same themes as Madrick in 2013 and disagrees with the prevailing notion that income inequality is caused by a “skills gap.”

Yet this focus on individual workers misses the structural conditions that constrain workers’ options and ability to share in economic growth. This issue brief examines recent data-driven research that demonstrates the skills gap is only a small and relatively unimportant explanation for the college wage premium because it fails to account for declining worker power and the role of monopsony in the labor market. These more important explanations for the college wage premium—and its recent decline—underscore why policymakers need to improve the underlying labor market conditions for all workers, instead of shifting responsibility to those already struggling in an uneven playing field.

Now, as the economy re-opens, employers are finding it harder to hire people. Republicans naturally fell back on the old strategy of forcing people to take whatever work they can get or face homelessness, and Republican governors yanked enhanced employment benefits prematurely. I understand some Senate Republicans are trying to stop the enhanced benefits for the whole country. There is all kinds of data showing that the extra $300 a week really isn’t the reason people aren’t jumping to take back their old minimum wages jobs — see, for example, The real reason employers can’t hire enough workers by Jill Filipovic at CNN — but you can’t tell a conservative that. The peasants must be punished to make them work, they say. In so many words.

The labor shortage is starting to affect the stock market, which may be the real reason so many Republican politicians are concerned about it.

Some employers find themselves doing the unthinkable and offering higher wages. But if it’s too soon to tell if this is the beginning of a trend or just a temporary blip.

Today in the New York Times we see From Appetizers to Tuition, Incentives to Job Seekers Grow by Nelson D. Schwartz. A lot of companies are adding education benefits like tuition reimbursement to their benefits packages. “As generous as the incentives may seem, they can be cheaper than across-the-board pay raises,” the article says. Of course.

We know the rich have been getting richer at a fantastic pace these past few years. The U.S. tax code is all about taxing income from labor over good ol’ wealth, which hasn’t helped our inequality issues much. See also The Secret IRS Files: Trove of Never-Before-Seen Records Reveal How the Wealthiest Avoid Income Tax at ProPublica.

This may help. Over the weekend the G7 nations agreed to a minimum 15 percent tax rate on the profits of foreign subsidiaries of multinational corporations. Paul Krugman explains why this is a big deal.

But if any good comes out of this terrible time, maybe it will be that the peasants finally learn they can push back. Let’s hope. 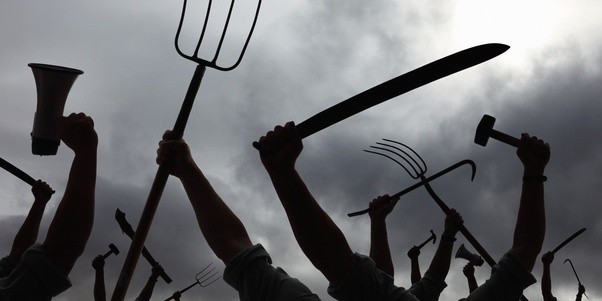 11 thoughts on “About Time for the Pitchforks”