You may have seen the headlines declaring that an Interior Department’s inspector general report decided that Lafayette Park was not forcibly cleared last year for Trump’s Bible Stunt. Closer inspection of said report reveals that’s not exactly what it says.

The report documents that a decision to clear the park and surround it with non-scalable fencing had been made prior to Trump’s formulation of the Bible Stunt. However, the report (which has redacted bits) also more than hints that said plans were accelerated once it became known that Trump might visit the area later that day, June 1. People quoted in the report denied that the timetable was accelerated, but it sure as hell looks accelerated.

At about 6:10 — while reporters were gathering to the Rose Garden for a 6:15 announcement — AG Bill Barr entered the park with his security detail and some White House staff. Barr spoke to the U.S. Park Police officer in charge. This officer told Barr to move away because the area was unsafe. Barr expressed displeasure that the protesters were still there; he thought they would be gone by that point, he said. The report continues,

Barr wouldn’t have had to order him explicitly, would he? The order was implied. And then, according to a report published last June by the New York Times,

At 6:17 p.m., a large phalanx of officers wearing Secret Service uniforms began advancing on protesters, climbing or jumping over barriers at the edge of the square at H Street and Madison Place. Officials said later that the police warned protesters to disperse three times, but if they did, reporters on the scene as well as many demonstrators did not hear it.

So it’s just a concidence that Bill Barr dropped by at 6:10 to let the Park Police know the POTUS is coming, and at 6:17 officers in Secret Service uniforms advanced on the protesters to clear them out? Are you freaking kidding me?

Meanwhile, the 6:15 announcement was delayed until 6:43 to give the clearing-out time to work.

What I’m seeing here is that Trump and his minions expected the park to be cleared by that evening, and when the Trumpers found out it wasn’t cleared, Bill Barr trotted over to drop a hint they’d better hurry up.

Some form of chemical agent was fired at protesters, flash bang grenades went off and mounted police moved toward the crowds. “People were dropping to the ground” at the sound of bangs and pops that sounded like gunfire, Ms. Gerbasi said. “We started seeing and smelling tear gas, and people were running at us.”

By 6:30 p.m., she said, “Suddenly the police were on the patio of St. John’s Church in a line, literally pushing and shoving people off of the patio.” …

… At 6:43 p.m., Mr. Trump made his statement in the Rose Garden, finishing seven minutes later, and then headed back through the White House to emerge on the north side and walk out the gates and into the park.

Now, seriously, they want us to believe that it just miraculously happened that the park was cleared minutes before Trump set foot on it? Note also that National Guard troops were observed arriving in the area earlier that day, which makes me suspect the White House had anticipated the park problem would have been taken care of before that evening.

See also Philip Bump at WaPo, who has videos:

Five minutes after Barr and the commander spoke, uniformed Secret Service officers briefly began pushing the crowd back. At 6:28 p.m., after several audio warnings to the crowd to disperse, Park Police began clearing the area from east to west; that is, starting from the side nearest the church where Trump would later appear for his photographs. At 6:43 p.m., nearly half an hour after scheduled, Trump begins speaking, even as the area is still being cleared.

Bump notes that the report is a very limited one that deals only with the actions of the U.S. Park Police.

We don’t know Barr’s side of the story because the inspector general’s report focused only on the conduct of the U.S. Park Police (USPP), the organization that falls within the Interior Department’s mandate. Many other agencies were on the scene that day, including Bureau of Prisons officers — airdropped in by the Justice Department in response to the ongoing protests — and the Secret Service. Most of the officers there were under Park Police direction (except the Secret Service) but the inspector general only “sought interviews and information from individuals outside of the USPP when doing so would provide us with information about the agency’s USPP’s activities. Accordingly, we did not seek to interview Attorney General William Barr, White House personnel, Federal Bureau of Prisons (BOP) officers, [D.C. Metropolitan Police (MPD)] personnel, or Secret Service personnel regarding their independent decisions that did not involve the USPP.”

It’s obvious that the White House expected the park to have been cleared. Note also that there was a 7 pm curfew, put in place by Mayor Muriel Bowser, and it might have been reasonable to wait until 7 pm to begin moving people out. The protesters probably expected that. When the push began earlier, there was chaos.

The report also documents (beginning on p. 13, or PDF p. 16) that  chlorobenzylidene malononitrile (CS) gas was used on protesters by Metro Police, which caught the USPP personnel off guard because that gas wasn’t authorized and the USPP were unmasked. This operations was utterly uncoordinated, it appears. And of course the feds denied for months that chemical irritants were used at all.

So pretty much everything we said about the Bible Stunt last summer is confirmed by this report, but the headlines say just the opposite. Typical. 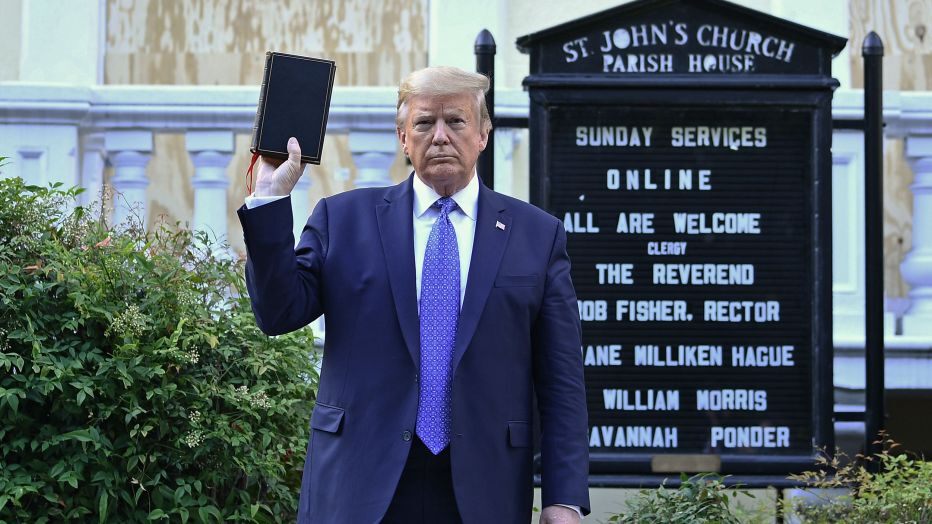 4 thoughts on “What Really Happened in Lafayette Square Park”