As I wrote yesterday, Senate Democrats are moving forward on two parallel tracks with infrastructure bills. At the moment, Chuck Shumer does intend to allow the “compromise” bill being cobbled together by five Republicans and five Democrats to be put forward for a vote, if it gets enough votes for cloture. At the same time, today the serious work of preparing a reconciliation bill that doesn’t require Republican votes is beginning in the Senate Budget Committee, chaired by Bernie Sanders.

But what if the compromise bill passes in the Senate? Which is possible if it gets through cloture. Jim Newell writes at Slate that the bad bill could freeze out the good bill.

Few Republicans were worried that they might look like suckers if they were to give Democrats a bipartisan “win” and then watch as Democrats proceeded to secure the rest of their agenda through reconciliation anyway. Their relative openness is guided by another political suspicion: the belief that making a limited bipartisan deal would prevent Democrats from having the votes to get the rest of what they want through reconciliation.

In other words, if the bad compromise bill passes, Manchin and other troglodytes — er, moderates — would be harder to pressure to vote for the good reconciliation bill.

How bad is the bad bill? Really bad.

The [compromise] proposal would offer about $579 billion in new spending for physical infrastructure. It would be paid for through some combination of indexing the gas tax to inflation, creating a new miles-traveled fee for users of electric vehicles, improving tax enforcement, repurposing certain unused COVID relief funds, and creating public-private partnerships.

And “repurposing certain unused COVID relief funds” is basically a ruse to strip funds from the American Rescue Plan that was signed into a law in March. See What The GOP’s Infrastructure Pay For Would Actually Mean For States And Cities by Josh Kovensky at Talking Points Memo. It’s true that much of the allocated covid relief money has not yet been spent. However, that’s not because there’s nothing to spend it on.

Funding for states and cities in the American Rescue Plan would be uniquely vulnerable to repurposing. The money is set to come in two tranches, with the second tranche arriving one year after the first.

What that money might go to depends on the jurisdiction, but it comes as states and cities shore up budgets that were depleted during the pandemic and rehire staff that were laid off because of the virus. It also includes plans for grappling with the longer-term consequences of the pandemic, in the form of programs for those suffering from long COVID, or funding for public health programs.

It also represents a marked increase in federal investment in local government that comes after decades of neglect.

Irma Esparza Diggs, director of federal advocacy for the National League of Cities, said that for many cities, the narrative of “too much” federal aid was overblown and that officials she spoke to were still searching for more funds to restart programs that were cut during the COVID recession.

St. Louis, for example, is still formulating plans for the money the city received in the relief package. Mayor Tishaura Jones just released her proposals for the money yesterday. So much has not been spent, but that’s not because it isn’t needed. Clawing that money back would be a disaster.

There is also a real possibility that such a bill would fail to pass in the House, which would leave us with nothing.

Greg Sargent, at least, is reassuring us that the reconciliation package won’t be substantially watered down.

Schumer will instruct those Democrats to craft a measure that includes requisite spending for policies that would “reduce carbon pollution at a scale commensurate with the climate crisis,” the aide emails, adding that he will also say that the family-oriented components of Biden’s package are “essential” and must be “robustly funded” in reconciliation.

The reason this is so critical is that many progressives have been loudly objecting that the endless quest for a deal with Republicans was putting all the progressive priorities in Biden’s package at risk. This seems like an effort to reassure the progressives that they needn’t worry. …

… Indeed, as I’ve reported, Sen. Bernie Sanders (I-Vt.), who as chair of the Budget Committee is playing an influential role in the creation of that reconciliation package, is privately confident that this measure will be historic in ambition and scope, even if it doesn’t give progressives everything they want. Schumer’s latest directives perhaps validate that confidence.

If Benie likes it, it should be okay.

Greg Sargent also casts doubt on whether the compromise bill will pass in the Senate.

As we all knew would happen, the bipartisan deal is failing to materialize. While it’s still possible, skepticism is intensifying on both sides, with Republicans saying it’s too liberal, and progressives saying too much is being traded away and it’s time for Democrats to move forward alone.

In short, there’s a lot of wheeling and dealing left to do here. But all is not yet lost. 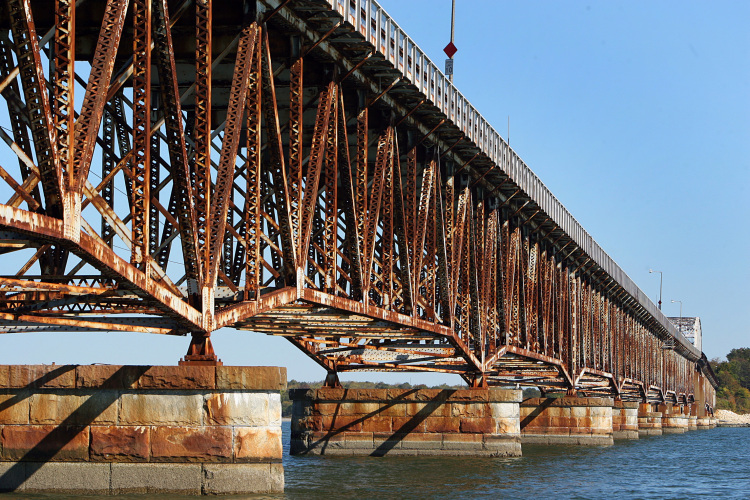 BOSTON – OCTOBER 16: This is a view of the rusted Long Island Bridge. (Photo by John Tlumacki/The Boston Globe via Getty Images)

2 thoughts on “More on What’s Happening With Infrastructure”