You really ought to go to The Intercept and read Leaked Audio of Sen. Joe Manchin Call with Billionaire Donors Provides Rare Glimpse of Dealmaking on Filibuster and January 6 Commission by Lee Fang and Ryan Grim. It does indeed.

It can’t be a surprise that Manchin is talking to a lot of center- and not-so-center Right types with a lot of money. The billionaires — capital management, equity firms, hedge funds — are all associated with No Labels, a “third way” sort of group that lists Joe Lieberman as one of its national leaders. You get the picture.

The Zoom call happened on Monday, the article says, and we see Manchin still nearly frantic to get some Senate Republicans on board with a January 6 Commission, even though that vote was taken in May.

Manchin told the assembled donors that he needed help flipping a handful of Republicans from no to yes on the January 6 commission in order to strip the “far left” of their best argument against the filibuster. The filibuster is a critical priority for the donors on the call, as it bottles up progressive legislation that would hit their bottom lines.

Manchin told the donors he hoped to make another run at it to prove that comity is not lost. He noted that Sen. Pat Toomey, a Pennsylvania Republican who missed the vote, would have voted for it had he been there, meaning only three more votes are needed. “What I’m asking for, I need to go back, I need to find three more Republican, good Republican senators that will vote for the commission. So at least we can tamp down where people say, ‘Well, Republicans won’t even do the simple lift, common sense of basically voting to do a commission that was truly bipartisan.’ It just really emboldens the far left saying, ‘I told you, how’s that bipartisan working for you now, Joe?’”

Poor baby. But here is the part of the article that is getting the most buzz:

THE GROUP IS passionately supportive of the filibuster, and when multiple donors quizzed Manchin on his stance on it, the senator displayed an openness to reform that is at odds with his latest public statements.

Last spring, he said that he could be supportive of a “talking filibuster” that required the minority to hold the floor, rather than putting the onus on the majority. After an uproar from Republicans, he penned a Washington Post op-ed saying that he would not “weaken or eliminate” the filibuster, which optimists noted left room for reforms that strengthened it in spirit, by forcing more bipartisanship.

In June, he told CNN, when asked if he was committed to maintaining the 60-vote threshold, that he wanted to “make the Senate work,” a sentiment he repeated each time he was pressed. Once again, he followed it up with an op-ed, this time in the local Charleston Gazette-Mail, saying that he had no intention of weakening the filibuster.

Manchin’s openness for filibuster reform on the call is notable given it flew in the face of many attendees’ hopes. Asked about a proposal to lower the threshold to beat back a filibuster to 55 votes, he said that it was something he was considering, but then quickly referred back to his earlier idea of forcing the minority to show up on the Senate floor in large enough numbers to maintain a filibuster.

Hope springs eternal, and yesterday after this came out there was much chirping that maybe filibuster reform isn’t completely dead after all. It also clarifies that Manchin isn’t clinging to the filibuster because he really believes in it, but because his donors really believe in it.

Also yesterday, Manchin released his version of what he wants in an election reform bill. Tierney Sneed writes in Talking Points Memo:

Manchin is seeking to strip several major ballot access provisions from the For the People Act, the bill currently before the Senate, which is also known as S.1. He also wants to scale back the reach of the Voting Right Act’s preclearance regime, weakening what’s in previous versions of the VRA restoration legislation, known as the John Lewis Voting Rights Advancement Act. Preclearance is the requirement that certain states with a history of racially discriminatory voting practices get federal approval for election policy changes. It was gutted by the Supreme Court in 2013, and Republicans refused to revive it when they controlled Congress.

According to a proposal document made public Wednesday, Manchin also opposes S.1’s requirement that states offer no-excuse absentee voting. He also wants changes to its voter ID language. Currently, S.1 would require that states allow non-ID holders an affidavit option to confirm their identity; Manchin’s proposal vaguely alludes to letting voters show utility bills or other forms of identification that some photo ID states do not now allow.

But here’s the kicker — this morning Stacey Abrams threw her support behind Manchin’s proposals. No, really, she did. And that’s because of the items in the For the People Act and John Lewis Act that Manchin does support. Manchin supports;

Other provisions he supports would make registration and absentee voting easier. And Stacey Abrams is saying, I’ll take it. To me, if they didn’t pass anything but a ban on political gerrymandering, that would be worth it.

Of course, none of this will mean anything if Manchin doesn’t get over his, um, ambivalence on the filibuster.

Senate Minority Leader Mitch McConnell said he believed all 50 Republicans would oppose Sen. Manchin’s (D-W.Va.) slimmed-down elections compromise, which focuses on expanding early voting and ending partisan gerrymandering in federal elections. And it’s not clear there’s a single Republican vote to even begin debate on the matter, potentially dooming Manchin’s proposals before they can even make it into the bill.

Even Romney and Murkowski are turning up their noses at Joe’s proposals.

Update: See Greg Sargent, Joe Manchin reaches out to Republicans, and they slap him in the face. Republicans were thrilled when they heard that Stacey Abrams had endorsed Manchin’s proposal. This is not because they admire Stacey Abrams.

Rather, they were thrilled because, as Sen. Roy Blunt of Missouri candidly put it, they now get to rebrand Manchin’s compromise as “the Stacey Abrams substitute.”

The careful observer will note that nothing substantive about the proposal itself changed when Abrams endorsed it. What changed is that Republicans now get to associate it with Abrams, rather than Manchin.

So that would be zero Republican votes for the Manchin compromise, I take it. 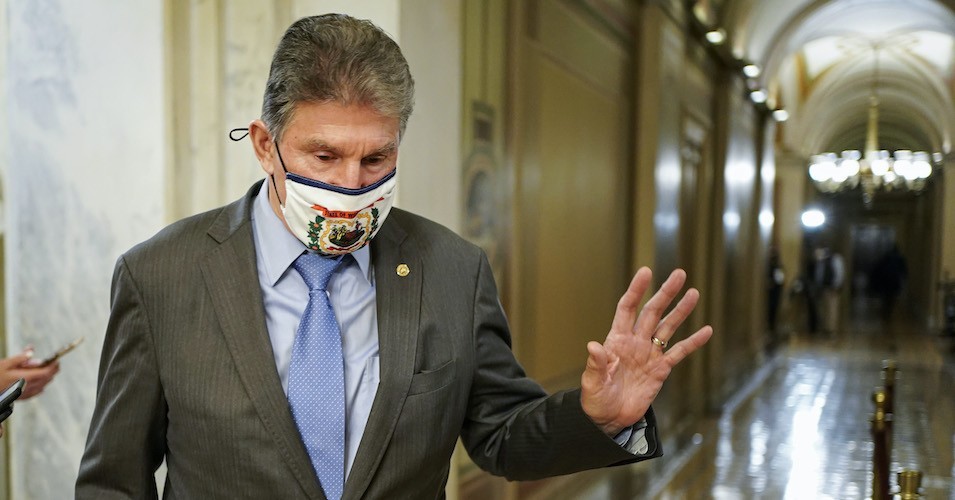 5 thoughts on “The Newest Episode of the Joe Manchin Saga”