One of the weirder news stories today tells us that a guy who became a billionaire selling junk auto parts is paying South Dakota to send National Guard to the Texas border. Seriously.

Josh Kovensky managed to get on the phone with Willis Johnson, the auto-salvage billionaire who is paying for the South Dakota state national guard – yes, a state that almost borders Canada – to go to the border with Mexico to patrol the situation.

On the one hand, we don’t want GOP megadonors going full warlord and renting state militias for this kind of stuff. On the other hand I think another just as likely scenario, quite possibly more likely though no less worrisome, is this. Kristi Noem’s political advisors said, hey we need to get in on this for the 2024 primaries. All the big 2024 contenders who run a state government are sending personnel to the border for these kinds of cosplay adventures. But South Dakota is a small state – budget and personnel-wise. And that created a budgetary headache. So they called up one of her donors to make that problem go away.

One might ask, as Steve M did, is this legal? I don’t know that it’s specifically illegal. It appears there is no precedent for somebody paying a state governor for a National Guard deployment, especially a deployment in another state.

Gov. Kristi Noem is sending 50 troops to support some kind of border protection theater being run by Texas Gov. Greg Abbott. Abbott, working as hard as he can to use his border with Mexico as a political asset,  asked for other states to send  Guard to patrol the border rather than rely on the Border Patrol. Putting aside for now whether Abbott is usurping the authority of the federal government, I believe there is precedent for the governor of one state to send Guard to another state at that governor’s request. But the fact that the deployment is being underwritten by a private citizen is just … weird. It seems wrong.

And while the National Guard, when not federalized, is under the command of state governors, they are also part of the Department of Defense.  And a wealthy Trump supporter is paying for them to pull some kind of political stunt. At the moment, it isn’t clear where they will be deployed or what their mission will be, which suggests they aren’t needed all that much. But is this something states should be doing at all? Where does the Border Patrol come in? Who will these troops report to?

Further, the exact amount of the donation, and exactly what’s being done with the money, or what conditions were made for its use, are being kept hidden for “security” purposes. Right.

Paul Waldman is calling this, um, thing part of the GOP’s new rebellion against federal authority.

Imagine you’re a member of the National Guard, and your commanding officer informs you that you’re being activated for duty. New orders from Washington? A natural disaster? Nope. It seems a billionaire from another state gave your governor a bunch of money so she could send you and a few dozen of your colleagues to Texas to do border enforcement, something you’re not trained for.

While the details are still coming into focus, that’s essentially what is happening in South Dakota: Republican Gov. Kristi Noem, who has her eye on the White House in 2024, is taking money from the foundation of Tennessee auto auction magnate Willis Johnson to deploy her Guard troops to Texas because she thinks the federal government isn’t doing its job. …

… Noem is essentially saying that she and other Republican governors can usurp the federal government’s responsibility over the border — and not only that, they can have conservative megadonors fund the operation.

Border security is definitely a federal responsibility, part of U.S. Customs and Border Protection within the Department of Homeland Security. State law enforcement does work in cooperation with federal enforcement, but I doubt state law enforcement engages in its own border enforcement actions and policies independent of the feds. That would be chaotic.

IMO the Department of Defense ought to pull the plug on this before other states come up with creative political uses for their Guard. 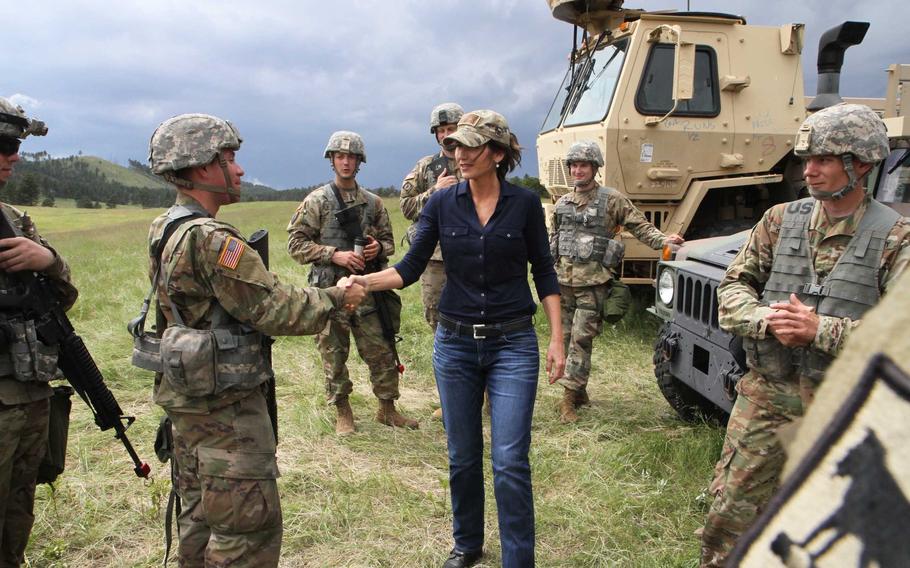 I don’t know if this is available to non-subscribers, but if you can watch it, please do watch this video at the New York Times showing the January 6 insurrection/riot in detail. “The Times’s Visual Investigations team spent several months reviewing thousands of videos, many filmed by the rioters themselves and since deleted from social media. We filed motions to unseal police body-camera footage, scoured law enforcement radio communications, and synchronized and mapped the visual evidence,” it says. Most of the video footage was taken by rioters. From this you can get a sense of what was happening at the same time in various parts of the building, with diagrams showing exactly what part of the building you are seeing. It’s also pretty graphically violent.