I really do just want to crawl into a hammock on a tropical beach somewhere and stay there until something is resolved. By something, I mean until Trump is in jail, or until Kyrsten Sinema decides what she wants and the infrastructure bills can pass. Something.

I’ve been thinking about the phrase “all publicity is good publicity.” Sinema and Manchin are putting that to the test. I honestly didn’t know anything about Kyrsten Sinema, other than her being a Democratic senator from Arizona, until this year. I suspect that’s true of most Democrats around the country. Now I bet she’s about as popular with most Democrats around the country as Mitch McConnell. I’d wish for her to accidently fall into a volcano somewhere, but she’d be replaced by a Republican.

Same thing with Joe Manchin. I knew Manchin was a conservative Demcrat, but until this year I never felt a strong urge to gouge out his eyes with my thumbs.

The recent pattern has been that somebody announces that some part of President Biden’s agenda has become acceptable to Manchin, causing a brief flurry of optimism. The next morning, headlines announce that Manchin says he can’t support whatever that was, after all, leading to a big collective sigh and a “never mind.” And this is followed by editorials that blame progressives for the gridlock.

The talkings heads on MSNBC keep trying to persuade us that the bills Manchin has gutted are still good bills. Maybe, in the sense of being better than nothing. But I don’t want to hear any more about this or that being cut out to get Manchin’s vote. I’m done. Just let me know when it’s all over.

Meanwhile, white Virginia parents have been whipped into a frenzy over threats that their children’s public schools might be teaching children about racism. This could cost Terry McAuliffe the election next week. So stupid. 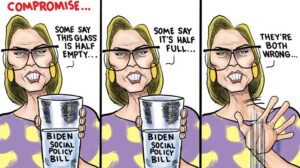 7 thoughts on “Talking Myself Off a Ledge”