“This year we’ve seen a number of conservative personalities, including the late evangelical leaders Marcus Lamb and Jimmy DeYoung, who succumbed to Covid-19 after minimizing the risks of the disease or making disparaging remarks about the vaccines. What is such opposition if not an arrogant attempt to put God to the test, no less problematic, say, than stepping off a great height and counting on being caught by angels?”

For those of you who missed Sunday School, that last comment is a reference to Matthew 4:5-7, in which the devil told Jesus to throw himself off the highest point of the temple so that angels would catch him. Jesus replied, ” It is also written: ‘Do not put the Lord your God to the test.’” Some translations render this as “You shall not tempt the Lord thy God.” There are many centuries of sermons and commentaries on Matthew 4, but most of them I’ve seen boil down to “Don’t try to manipulate God into performing a miracle to save your ass so you can show everybody what a Big Shot Holy Person you are.”

DeBerry points to a survey by the Public Religion Research Institute (PRRI) that shows white evangelicals are the only “religious” group in the U.S. in which a majority believe people should be able to get a religious exemption from covid vaccine mandates. (I have “religious” in quotation marks because DeBerry apparently thinks that “religion” consists entirely of Christianity and Judaism. PRRI lumps all the world’s other religious traditions under “Other non-Christian religion,” none of which appear to have religious issues with vaccines.) A majority of all the other religious groups surveyed thought there should be no religious exemption for vaccines.

There is no record I could find of evangelical leaders opposing vaccines on religious grounds in the past, before covid. The current objection appears to be some kind of shift in doctrine, even though no one is explaining what that doctrine is.

So the question is, on what basis should a religious exemption from covid vaccine mandates be allowed, from an evangelical perspective?

Although faith healing is not unknown in evangelicalism, I’m not aware of any situation in the Bible in which people were berated for consulting a physician instead of relying on God’s grace for healing. There wasn’t much in the way of medical science in those days, of course, although Greek and Roman physicians had figured out how to treat some things by Jesus’ day. But even the Romans employed prayers and chants as part of medical practice. The point is that there is nothing explicit in the Bible, and no argument from centuries of Christian theology before the 19th century or so, that provides Christians a clear religious exemption from getting covid vaccines or seeking any kind of medical treatment. Yes, this includes abortions.

In the 19th century all kinds of new religions emerged, some ostensibly Christian and some not. These include the Church of Christ, Scientist, which began in the 1870s. Christian Science has a complicated belief system about medical care that I can’t say I entirely understand. They go to medical professionals for some kinds of health care but rely on prayer alone for other kinds. From what I have read these beliefs aren’t based on the Bible or any previous school of theology. However, even the Christian Scientists these days are not rigidly dogmatic about vaccines and encourage practitioners to make up their own minds.

Here’s an article from the Council on Foreign Relations that provides some historical background on religious objections to vaccines in the U.S.. In brief, in the past there really hasn’t been much objection to vaccines based on religious beliefs. One scholar noted that American religious leaders in the 1950s and 1960s praised vaccines as gifts from God.

One of the patriarchs of evangelicalism, John Wesley (1703-1791) not only approved of the medical science of his day, he also opened free clinics and pharmaceutical dispensaries for the poor. He encouraged people to have faith and pray, also, but he encouraged people to take their physical ailments to doctors for treatment.

But evangelicalism itself has changed a lot from its origins. Many 19th century evangelicals were the flaming liberals of their day. Northern evangelicals were leaders of the Abolitionist movement, and later many were active in the Social Gospel movement, which in turn gave birth to the Progressive Era of the early 20th century. There were conservative evangelicals also, of course. But a century and more ago evangelicalism was distinct from fundamentalism, a reactionary religious movement of the late 19th century that formed as a backlash to the Social Gospel and Darwin and modernism generally.

These days evangelicallism and fundamentalism have become synonyms. The reasons for that are complicated, but very briefly over several decades fundamentalism evolved and fused with Christian nationalism, and these movements merged with conservative evangelicalism and took over one congregation after another, driving out the liberals. And this mashup makes up most of today’s “Christian Right.”

It hasn’t been that long since the liberal Jimmy Carter was not shy about calling himself an evangelical. I’m not sure he still does. There are denominations that used to be considered evangelical — the United Methodists, for example — that don’t seem to use the word “evangelical” to describe themselves any more. Likewise the liberal United Church of Christ originally grew out of the evangelical movement but has nothing to do with evangelicalism these days.

But I wonder if the refusers who say getting a covid vaccine somehow violates their religious beliefs, whether personal or institutional, could articulate how that violation occurs, if you put them on the spot to explain it. I strongly suspect what we’re seeing is a lazy assumption that if one feels getting a covid vaccine is wrong, somehow, then the Bible must agree. Somehow.

Maggie Siddiqi, senior director of the Faith and Progressive Policy Initiative at the Center for American Progress, writes that Covid vaccine and mask mandates expose alt-right Christian hypocrisy: “For many on the religious right, religious freedom only matters if it supports a right-wing political agenda.”

… for many on the religious right, religious freedom only matters if it supports a right-wing political agenda. Indeed for years, extreme-right Christian groups have been misusing religious freedom to do everything from discriminating against LGBTQ people to denying access to reproductive health care. Far from a legitimate effort to protect the right to worship freely, religious freedom has been manipulated into another tool in the Christian nationalist playbook to circumvent any law or regulation they see fit.

At the start of the pandemic, when states were compelled to issue emergency public health orders to shut down in-person gatherings, including at houses of worship, the same groups who cried “religious freedom” at any law they disliked did so once again. It quickly became clear that if they could win exemptions from emergency public health orders on religious freedom grounds — even in the face of a deadly, highly contagious disease — they could win any claim by exploiting religious freedom.

If it were not apparent enough that these supposed claims of religious freedom ring hollow, an entire industry of anti-vaccine activists have now combined forces with Christian nationalists. Some clergy are even offering to provide religious exemptions — if you pay them. Liberty Counsel, the law firm that represented Kim Davis, the county clerk in Kentucky who refused to issue marriage licenses to same-sex couples, is a major player in providing legal guidance and representation to those seeking to use religious exemptions to circumvent Covid-related requirements.

But religious freedom does not matter, it seems, when Jewish groups state that life begins at birth, not at conception, and that denying the right to prioritize the life of a mother violates Jewish religious beliefs. Religious freedom does not matter when faith-based health care providers say they are morally, religiously obligated to provide care for all, without discrimination.

I am not expert in all of the world’s religions. There may be a sect somewhere that has a genuine doctrinal objection to mandates I don’t know about. But it seems to me there are no legitimate religious exemptions to the vaccine mandate.

This is not really answering the question of why so many white evangelicals are hostile to covid vaccines. I think the answer to that has nothing to do with religion. The problem is that what passes for religious doctrine among many evangelicals is nothing but consuming tribal loyalty to hard-right political views and Donald Trump. John Wesley wouldn’t recognize any of it. 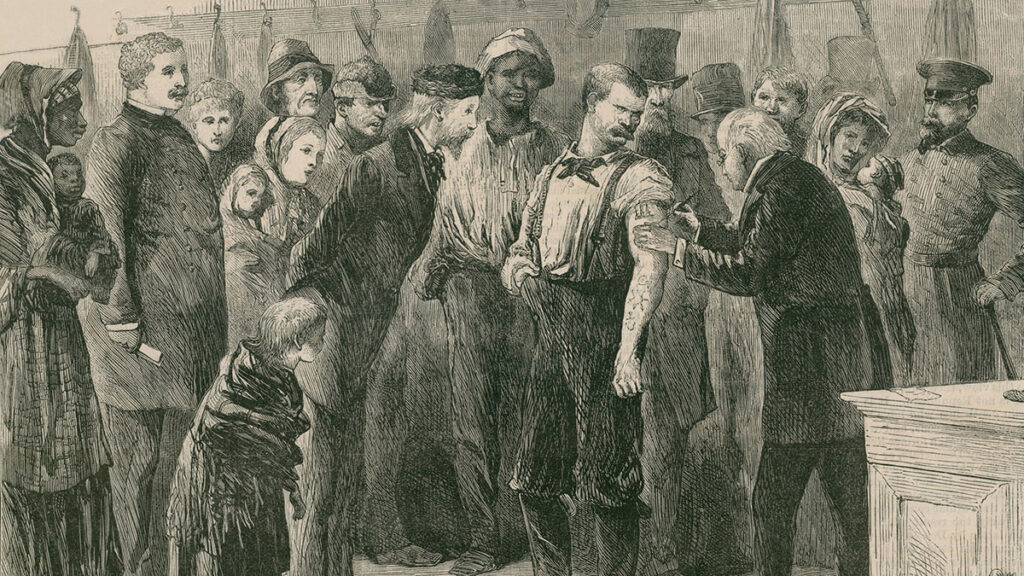 20 thoughts on “Why Do Evangelicals Oppose Covid Vaccines?”